As we approach a generation of console tablet interfaces and Apple's long-awaited play on the TV market, are Xbox and PlayStation in danger of being pushed out of our lives entirely? The fat lady hasn't sung yet, says Patrick Garratt.

While we've already seen significant disruption in the games market related to traditional formats such as PC and mobile, Apple really could turn the whole thing on its head. Apple TV is rumoured for launch in 2013. If the date's correct, we could see Apple at market with a console-free offering as a competitor to the next Xbox.

I just can't take the guy seriously. He's telling me that Apple TV could disrupt the next console generation to such a degree as to render Sony and Microsoft "irrelevant". He seems excited about the prospect, actually.

"That's bullshit," I say. "It'll cost thousands. The next PlayStations and Xboxes won't. And what, it's going to have a controller? Apple's going to make a games controller?"

"It's got OnLive built in, apparently," he sulks. I rant on.

"So it's going to cost about two grand US and you'll need a mental internet connection to get a reliable service for playing triple-A. Apple isn't a games company in the traditional sense in that it doesn't have a content creation infrastructure like Microsoft and Sony, and it will never have. Apple TV will just be an expensive window on the App Store for people with more money than sense."

Sometimes I really should think before I speak.

I've played video games since I was a small child - I'm going to be 39 this year - and I have never before seen the games industry in such a violent state of change as it is today.

In the past year we've all been focusing our attention on the mobile games space as Sony and Nintendo have brought new consoles to market amid scenes of unprecedented disruption. Apple and Android have altered the face of handheld gaming beyond recognition, not so much as applying a little make-up as punching it hard enough to spread its nose from ear to ear. The core games press published countless articles last year on the relevance of of 3DS and Vita, and we've seen Nintendo, ostensibly the immovable handheld object, truly humbled with an awkward 3DS launch.

Fortunes have lifted with price-cutting and the arrival of some buzz software, but it's impossible to argue against the difficulty Nintendo now faces in that market. Vita, too, has no easy prospects with its high initial retail costs and struggles to find balance between "dollar-game" culture and the realities of publishing games like Uncharted. Times have very much changed for mobile gaming.

There's every indication that we're about to see the same state of affairs applied to the TV games market.

The next 12 months will be very telling for "games". We've seen mobile gaming endure seismic shifts recently, but we've watched from afar. Mobile gaming is not the centre of the games industry. The bluster, money and true attention is always, and has always been, on the TV market. 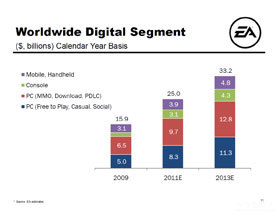 The reality, of course, is that the current console business has already been disrupted, by both modern PC gaming and the onset of digital distribution. Steam, for example, has now achieved 5 million concurrent users and 40 million accounts. PC has emerged as the default platform for open-ended creativity, despite indie-related efforts from both Microsoft and Sony. An extended console cycle has seen a large segment of the core user-base invest in PC gaming - every VG247 staffer has bought a new gaming PC in the past year - and traditional publishers are well aware of the potential in the PC space in the coming years. The digital revenue of PC gaming in its entirety - MMO, triple-A, casual, F2P, whatever else - is expected to rise from $18 billion in calendar 2011 to $24.1 billion in 2013. Console digital sales, by comparison, will climb from $3.1 billion to $4.3 billion in the same time-frame. Consoles, at least in their current form, are clearly ill-suited to match digital's distribution mountain goatish ascendance of the coming years' Everest of e-cash.

That said, we've seen a great deal of hyperbole in the last few years about the importance of the PC in the current market, and it's important to not get carried away with the whole "death of consoles" argument. The bulk of games revenue comes from consoles. In the last four recorded quarters - the 12 months ending September 30, 2011 - EA brought in $709 million revenue from PC, compared to $1.18 billion from 360 and $1.12 billion from PS3.

There's no denying, though, the current solidity of PC gaming; while total PC revenue for that period actually fell from $733 million in the previous year compared to a rise in total console sales from $2.37 billion to $2.62 billion, EA brought in more money from PC than it did from PS3 in its last quarter, as it did in the second quarter of the previous year. Steam, meanwhile, doubled both revenue and data delivery in 2011 over 2010.

In EA's full-year 2011 earnings call, John Riccitiello said: "The consumer has changed. 200 million console players have become 1.5 billion consumers gaming on multiple devices." Nintendo, Sony and Microsoft's consoles are not the games market any more. They're merely part of it.

Over the past two cycles there's no doubt that we've seen large-scale changes, but we've never seen a threat to the format itself. That could be about to change.

Jostling in the console space is nothing new. Console gaming's history is one of disruption. Sony harried Nintendo with PlayStation in the mid-90s. PlayStation 2 failed to stop the pig-headed Microsoft entering the market with Xbox in 2001, and PlayStation 3 was forced to fight for its life against Xbox 360 in the current generation. Over the past two cycles there's no doubt that we've seen large-scale changes, but we've never seen a threat to the format itself.

That could be about to change.

Battle of the TV

While we've already seen significant disruption in the games market related to traditional formats such as PC and mobile, Apple really could turn the whole thing on its head. Apple TV is rumoured for launch in 2013.If the date's correct, we could see Apple at market with a console-free offering as a competitor to the next Xbox. My scoffing about control was, in retrospect, ridiculous; any iTouch device could be used as a control method. The App Store on a new generation of televisions could revolutionise developers' ability to reach into people's lives, bringing the tiny-game mentality to sitting room evenings and potentially unlocking a new route into the home for triple-A developers and publishers.

If Apple TV does take hold as a games outlet, the entire notion of dedicated gaming set-top boxes could be made old-fashioned to a large audience, and that audience is likely to be distinctly broader than the current console market. We could see Microsoft and Sony under pressure from Apple over Xbox and PlayStation in the same way Vita and 3DS have suffered in the past year. Why buy a 720 or PS4 when you have an Apple TV and an iPhone? Are we going to see Microsoft and Sony fight to differentiate their hardware from Apple's offering as Sony and Nintendo were forced with Vita and 3DS?

Again, it's important to keep feet on the ground. It's clear Nintendo - and, seemingly, Microsoft - is perfectly aware of Apple's threat. Wii U has a tablet controller, and it's highly likely the next Xbox and PlayStation will feature similar functionality in some form. This is because of iPad, and it shows that the current major players in the games market don't lumber to the point of being unable to adapt.

Equally, it's important to remind ourselves just how invested the likes of Microsoft and Sony have become in the games market. Will Apple TV provide lip-reading motion tech? Or match the hard-won, dedicated infrastructures of PSN or Live? Or even provide a dedicated gaming experience? Of course not. Just as there's room for Apple to disrupt, there's room for the demonstrably vicious Microsoft and Sony to cling onto their hold on the games market with every ounce of strength.

It's unlikely Apple can make Xbox and PlayStation irrelevant in the next generation. Consoles have their place. Whether or not Apple TV is the beginning of the end for "traditional" living room games hardware is another matter.