Rovio, the developer and publisher of everything Angry Birds, has lost half of its market value after a lower-than-expected profits forecast.

The stock price for Angry Birds developer Rovio took a 50% dive after the company shared its forecast for 2018 profits.

Tech Crunch reports that despite generating $365 million in revenue in 2017, itself a 55% increase over the previous year, the company said and its latest earnings report that it expects this year's profits to be down ($319 million).

Rovio had an initial public offering (IPO) in October last year, at which point it was valued at $1.1 billion. Now, the company's value is below $500 million. The report says that the sharp drop seen this week is a result of what investors saw as misleading forward-looking statements Rovio made in the past about future profits. 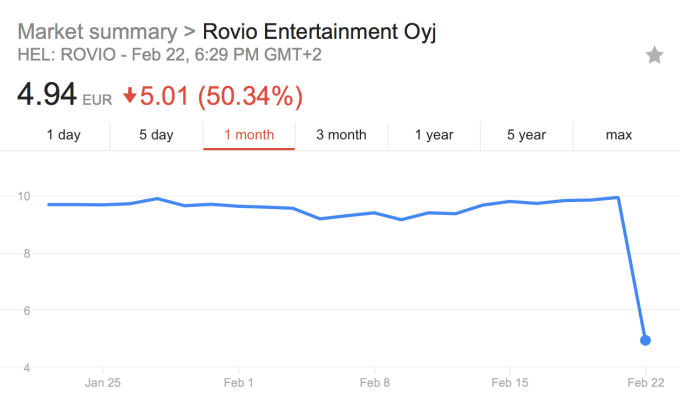 The bigger problem is that the Angry Birds brand is not what it once was. Even after numerous licensing deals and a feature film, Angry Birds just isn't growing at a rapid enough rate that could sustain Rovio's value. And seeing as it's Rovio's only hit, it was getting harder for the company to bring in new users.

Competition from current juggernauts like Candy Crush, Crash Royale and other mobile hits that dominate the app store also did not help.