After apparently selling out incredibly quickly, the Death Stranding Collector’s Edition has appeared back in stock in the US.

Hideo Kojima’s latest has intrigued and perplexed in equal measure since it was first announced back at E3 2016. In the following three years the game has barely become any clearer. Kirk did a stellar job of breaking it down in the VG247 Death Stranding review, though, calling it “interesting, incredibly pretty, and kind of dull”.

If that hasn’t put you off or left you more captivated than before, then you’ll only have to wait until Friday to try it for yourself. Chances are these copies of the Death Stranding Collector’s Edition are just the remaining few that retailers have scrounged together. Or, they could be some cancelled pre-orders following last week’s reviews. Don’t expect the stock to last for long, then!

The Death Stranding Collector’s Edition includes the full game with an exclusive steelbook case, BB Pod statue, Ludens keyring and Bridges Cargo Case. You’ll also get a number of golden items in-game to give Norman Reedus a bit of bling, a selection of original music from the soundtrack, behind-the-scenes video, PSN avatars and a PSN dynamic theme. 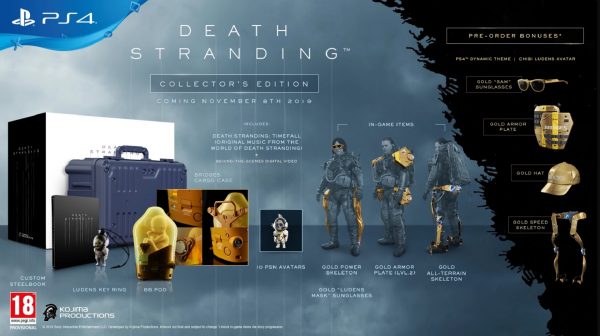 Take a step further and there’s the Death Stranding PS4 Pro with peculiar BB Pod controller and oil slick design. Limited stock of that is still available, too. And speaking of limited releases, the Nintendo Switch Lite – Zacian and Zamazenta Edition is back in stock at Amazon US for $199.99. Catch it while you can!

If you’re looking for something a little cheaper, though, you should check out our page dedicated to all the best PS4 Black Friday deals now that the mega retail event is on the horizon. Some early bird offers are already in there and we’ll be continuing to update the hub with any new sales over the coming weeks.

For offers all year round, you can always take yourself over to Jelly Deals. Right now, you’ll find our guide to the best PS4 external hard drive, where to get the best price for PS Plus and our Last of Us Part 2 pre-order guide.