As part of this week’s State of Play event, Sony unveiled a slightly odd limited edition Death Stranding PS4 Pro. It’s now available to order if you’ve been eager to secure yourself one.

Complete with splattered oily handprints on the casing (notice the outline of the continents inside them?) and a controller meant to look like one of those peculiar baby pods, the Death Stranding PS4 Pro is $399.99. It also includes a 1TB hard drive.

In the UK, the console is exclusively available through GAME for £379.99. 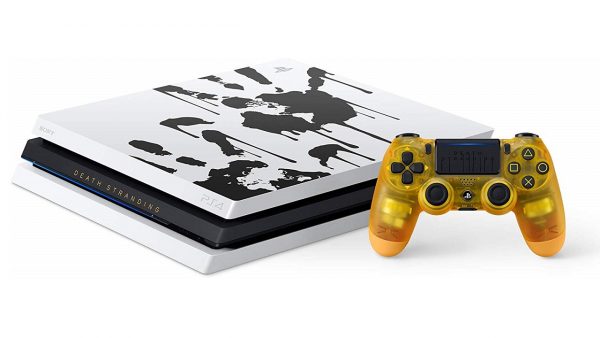 Of course, the bundle also includes a copy of Death Stranding. Even after all the recent footage was released, I’m not sure it’s still any clearer what on Earth this game is going to be like to play. Anything Kojima says to try and help only seems to make things worse, too.

So far, we’ve been told that Death Stranding gets really fun about halfway through the game, is a metaphor for Trump and definitely isn’t a walking sim but a whole new genre entirely. Keeping up?

Fortunately, there’s not much longer to wait to find out all the answers ourselves as Death Stranding is scheduled for release on 8th November. The Death Stranding PS4 Pro will launch on the same day, too.

This week was also massive for another of the PS4’s upcoming exclusives: The Last of Us Part 2. Kirk has been lucky enough to get a hands-on preview of the game for a few hours and came away even more excited for the sequel than he thought possible. There’s also going to be a whole handful of Last of Us Part 2 special editions that you can pre-order now.

If you’re not ready to pull the trigger just yet, you can keep track of the best price for The Last of Us Part 2 over at Jelly Deals. We’ve also got some top picks if you’re looking to grab a PS4 external hard drive or want a cheap PS Plus deal.