Plenty of additional content is coming to Final Fantasy 15 along with a Shadow of the Tomb Raider cross-over event.

Square Enix hosted a Final Fantasy 15 panel at PAX East this weekend, and plenty came out of it.

The four downloadable Episodes were announced earlier this year will start arriving in early 2019. Each will act as an alternate ending to Final Fantasy 15.

The content is titled Dawn of the Future, and it kicks off with Episode 1: Ardyn as first reported back in November. Ardyn was one of the most requested Episodes by players who participated in a feedback survey.

Extra content starring Luna was the second most requested in the survey, and the Final Fantasy 15 team will deliver Episode 2: Lunain mid-spring 2019.

The third stars Noctis, and it finds our main protagonist parting ways “with the Astrals” to engage in a final battle. His goal is to “attain the ideal future for all his people.”

Side Story Episode: Aranea will arrive between Episode 1 and 2. It focuses on the Starscourge from the Niflheim’s perspective.

Below are more details on each Final Fantasy 15 Episode along with the working title (thanks, resetera).

Episode 1: Ardyn – The Conflict of the Sage: This story portrays the struggles of Ardyn. Witness the resentment he harbored towards Lucis for over 2000 years, and his clashes with the Astrals.

Episode Side Story: Aranea – The Beginning of the End: A side-story about the Starscourge depicted from the Niflheim’s perspective. The final day of the Empire turns out to be Aranea’s worst day.

Episode 2: Lunafreya – The Choice of Freedom: The story about Luna’s fate, which not even death can free her from. Her battle to save the one she loves overturns the destiny dealt to the Lucian King.

Episode 3: Noctis – The Final Strike: Parting ways with the Astrals, Noctis embarks upon his final battle in order to attain the ideal future for all his people. 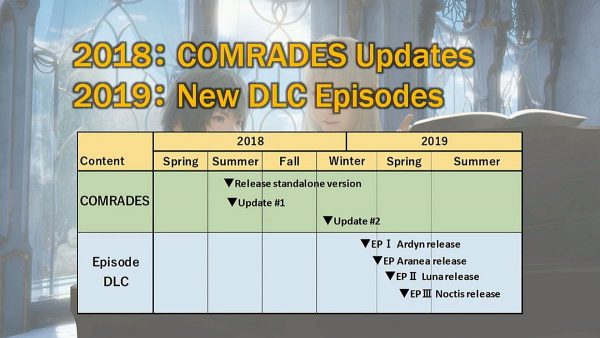 Final Fantasy 15 director Hajime Tabata said in February his team had four Episodes planned for the game. This is one more than the three announced in 2017. During an Active Time Report in September of last year, Tabata said the episodes would be released throughout 2018.

Since the plans changed to four, the Episodes were slated to start arriving in 2018 and release into 2019. These Episodes will now arrive in 2019 instead, as indicated at the top of the post.

During the PAX East 2018 panel, Square Enix also announced a Shadow of the Tomb Raider collaboration was in the works, but other than the announcement further details were not provided.

Shadow of the Tomb Raider releases September 14, so we can probably expect the cross-over content to arrive around that time.

The Comrades multiplayer expansion to Final Fantasy 15 will be released as a standalone title this summer.

An update for Comrades will also arrive in summer, and a second update is planned for winter 2018. This is noted in the release schedule image in this post.

PC players who own Final Fantasy 15: Windows Edition will be able to use the character creator currently available in the Comrades multiplayer expansion in the main game. This will allow folks to change the appearance of Noctis, according to IGN.

Windows Edition players will also receive mod support for Final Fantasy 15 this spring, with outfits and weapons available first. Creations can be uploaded to Steam Workshop as previously announced.

A level editor is also in the works and slated for fall 2018. Players will have various customization options, the ability to create simple quests, and additional content. IGN said two examples shown in the PAx panel were custom Chocobo races and a golf mini-game.

Windows Edition players will also be able to hide User Treasures in the game world. When hiding an item, the longer it takes other players to find it, the better the item.

Looks like there’s plenty for Final Fantasy 15 players to look forward to this year and into the next.