After months of speculation and first confirmation of the existence of the device at last week's Superbowl, Sony Ericsson has said it'll launch Xperia Play in March. 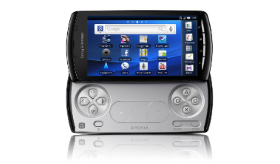 Will release in the US in "early spring" with Verizon being the first American carrier.

The phone will have 50 titles at launch, including a pre-loaded PSOne Classic, Crash Bandicoot.

First shown off in leaked prototype pictures in October.

Xperia Play will run on Gingerbread, the latest version of Android.

According to Sony Ericsson, the decision to make a PlayStation-like phone was taken in 2005.

PlayStation boss Kaz Hirai was also in attendance and took to the stage to talk about the device. He mentioned the PlayStation Suite and the PlayStation Certification programs he announced at the NGP reveal in Tokyo at the end of January, which will enable Android devices to feature PlayStation content.

He confirmed that content will come from the PlayStation Store when it goes live near the end of the year, although Play will be pre-loaded with content as well as a legendary PSone title. Hirai didn't confirm what that would be at the time, but it's since been reported to be Crash Bandicoot.

The first game shown on the phone was Dungeon Defenders from Trendy Games.

Over 20 publishing partners will also support the device with 50 titles for launch. The number is increasing "on a weekly basis."

The US will get it first, with Verizon being the initial carrier when it ships in the region in "early spring".

"We don't want you to have to play just touchscreen Angry Birds the entire time," he said. "We want you to play true console quality games."

He added: "This is a mobile device that can really stand up to rowdiness. You really expect a lot out of your game controller, oftentimes you're just beating the crap out of it.

"You need a certain sturdiness to a game controller in order to beat the crap out of it and play the kind of games we want the end user to play."

According to a GameSpot UK talk with Sony Ericsson UK MD Nathan Vautier, previously-purchased content from PS Store will have to be purchased again for Play.

"[Xperia Play owners] will have to re-purchase the games, so it's not totally integrated," said Vautier.

"I think the exciting thing is that there are games which people are very, very aware of."

“We don’t see it as competition to a console like the NGP."

The company further added that it doesn't see Xperia Play in a competition on a gaming level with Sony's NGP, the next-gen successor to PSP.

"We don’t see it as competition to a console like the NGP. That’s a dedicated gaming device you’ll use this more as a compliment, a different type of entertainment and for different situations," VP head of product line, Christopher Bulcher, told PocketGamer.

Xperia Play will come in black or white, according to a press release reported by Kotaku.

Battery life has been well-detailed, with gameplay time lasting "up to 5 hours 35 minutes".

Here are the phone's full specs:

Gamespot also has a hand-on video with the phone here.