As MachineGames once famously said, there are a lot of things you can do with a hatchet and a Nazi. So what happens when you and a friend have a hatchet each and a murderous twinkle in your eye? Wolfenstein: Youngblood has the answer.

Wolfenstein: Youngblood is a fully co-op experience both for the players and its developers - a cross-studio collaboration akin to how id Software and Avalanche teamed up for Rage 2. MachineGames is on gunfeel, story, and systems, while Dishonored: Death of the Outsider developer Arkane Studios Lyon is focused mainly on level design.

What this means is we’re getting more open areas in the latest Wolfy, with Arkane using its immersive sim chops to lend a more freeform feel to the first-person shooter. Levels are stuffed full of flanking routes, vantage points, chokepoints, and as many air vents as you’d expect, yet fewer bins. 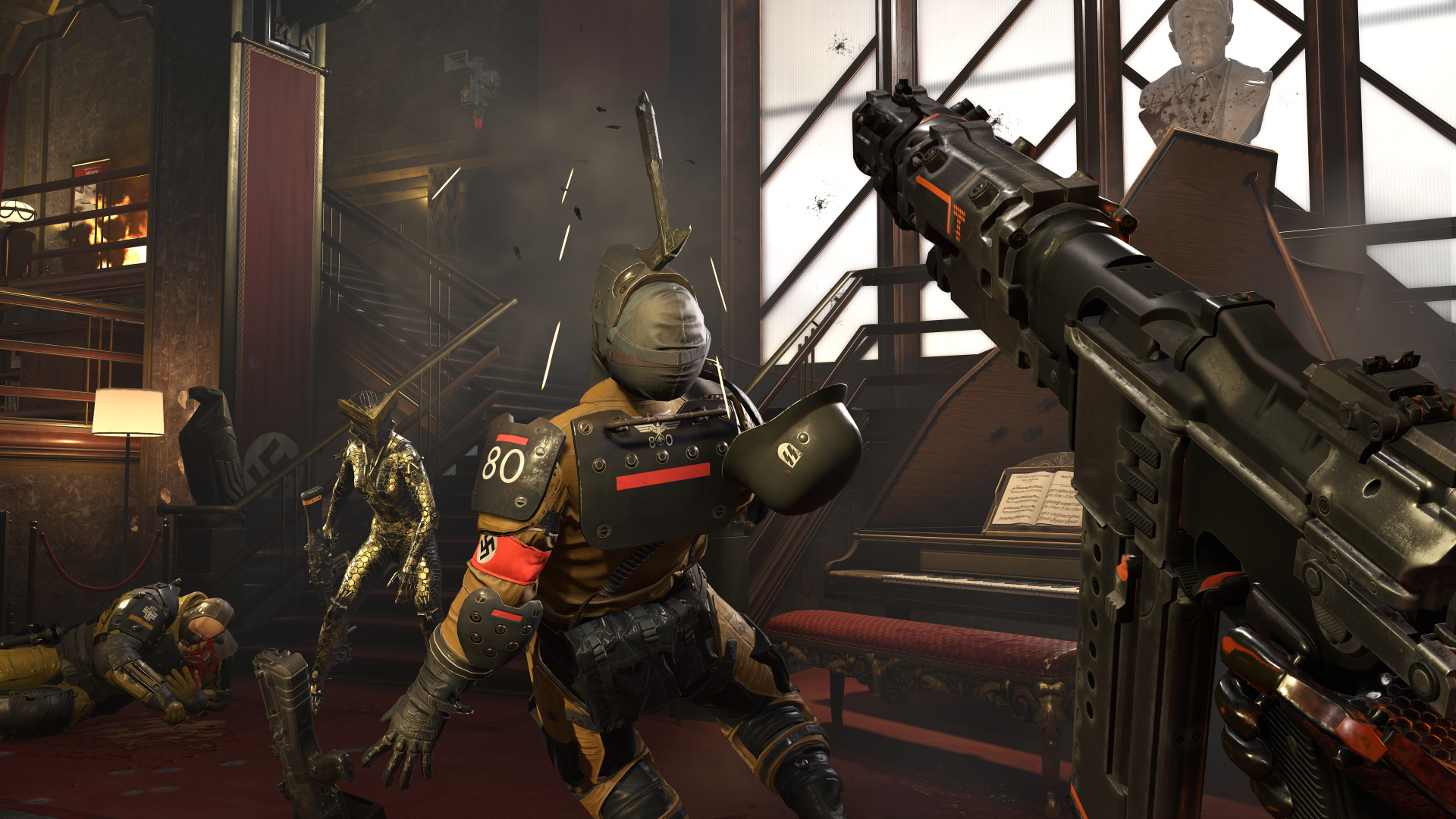 Youngblood is still a story-driven game - this time following the exploits of B.J. Blazkowicz’s twin daughters, Jess and Soph, as they search for their missing father through Nazi-occupied Paris - but you’re able to tackle missions in whatever order you like once the intro is done.

In a roundtable interview at the preview event, VG247 got to ask senior game designer Andreas Ojerfors about this partnership. A European games journalist also asked if the characters will have character arcs - dear reader, they will. Another asked him if they did market research and I wanted someone to hit me with a hatchet.

“It’s a proper partnership, it’s not like they’re just helping out,” Ojerfors says of Arkane’s input. “They have contributed to many different areas. They have done boss fights, they’ve designed and built a new weapon - a tesla gun - but the biggest contribution they’ve done is to the level design.

“We at MachineGames have learned so much from that, when it comes to making these levels that are more open-ended in nature. There’s much more room for exploration and you return to areas and find new ways to move through a part of the city, you return there to do side missions - they’ve done a lot of work on that part. It’s something we’ve tried to reintroduce to our own parts of the game as well. It’s been a very close collaboration.” 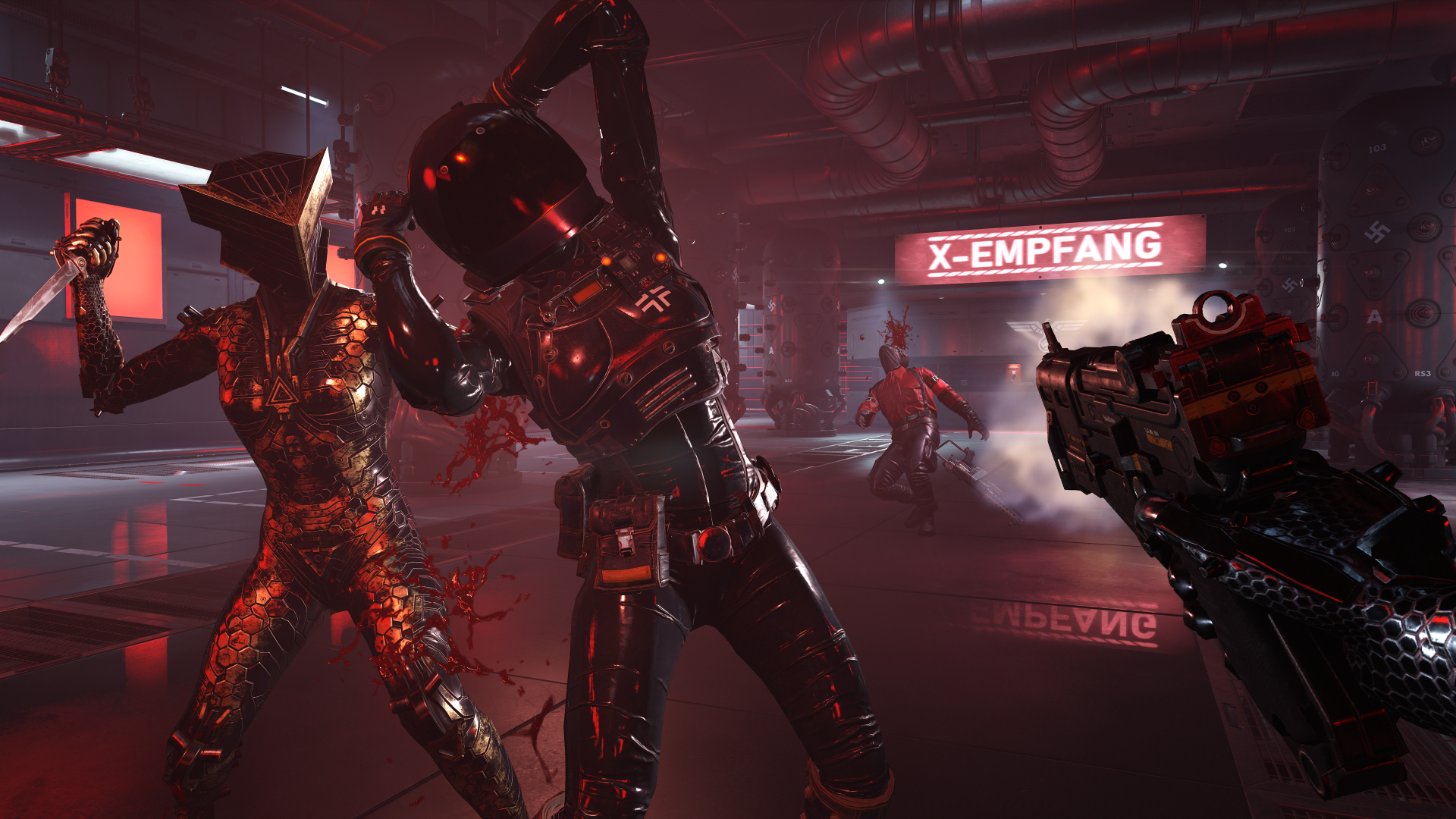 Levels here open up wide and tall, with some even offering opportunities to breach buildings by smashing through a window from an adjacent rooftop. It works very well, since it allows you and your co-op partner to attack from multiple angles and confuse the Nazi troops within, pulling their attention in two different directions.

Once you reach the catacombs beneath Paris, the structure opens up as well. This resistance fighter base of operations acts as a hub where you can chat to NPCs and accept side missions, then you’re free to use the underground network to travel between the three different districts of Paris. Ojerfors compares these districts to “a big Dishonored level in their open-endedness”.

In action, it feels very different to previous Wolfenstein games. The guns have the same rasp and kick, but enemies can sustain a lot more damage before they keel over in a pink mist. You increase in power as you tear through fascists, levelling up and increasing your damage output, while also pumping skill points into three trees - Mind, Muscle, and Power - and using coins to upgrade weapons.

“We worked very hard to make it still feel like you’re doing damage to the enemy, that your fire has an impact,” Ojerfors says. “The reason we have made some enemies stronger, giving them more health or armour, is to make them kind of focal points for combat. They become these common gameplay problems for the two players to solve together. If you don’t have that, you’re going to have two characters slaughtering all the enemies. So you need to have these enemies that will become common problems to solve.” 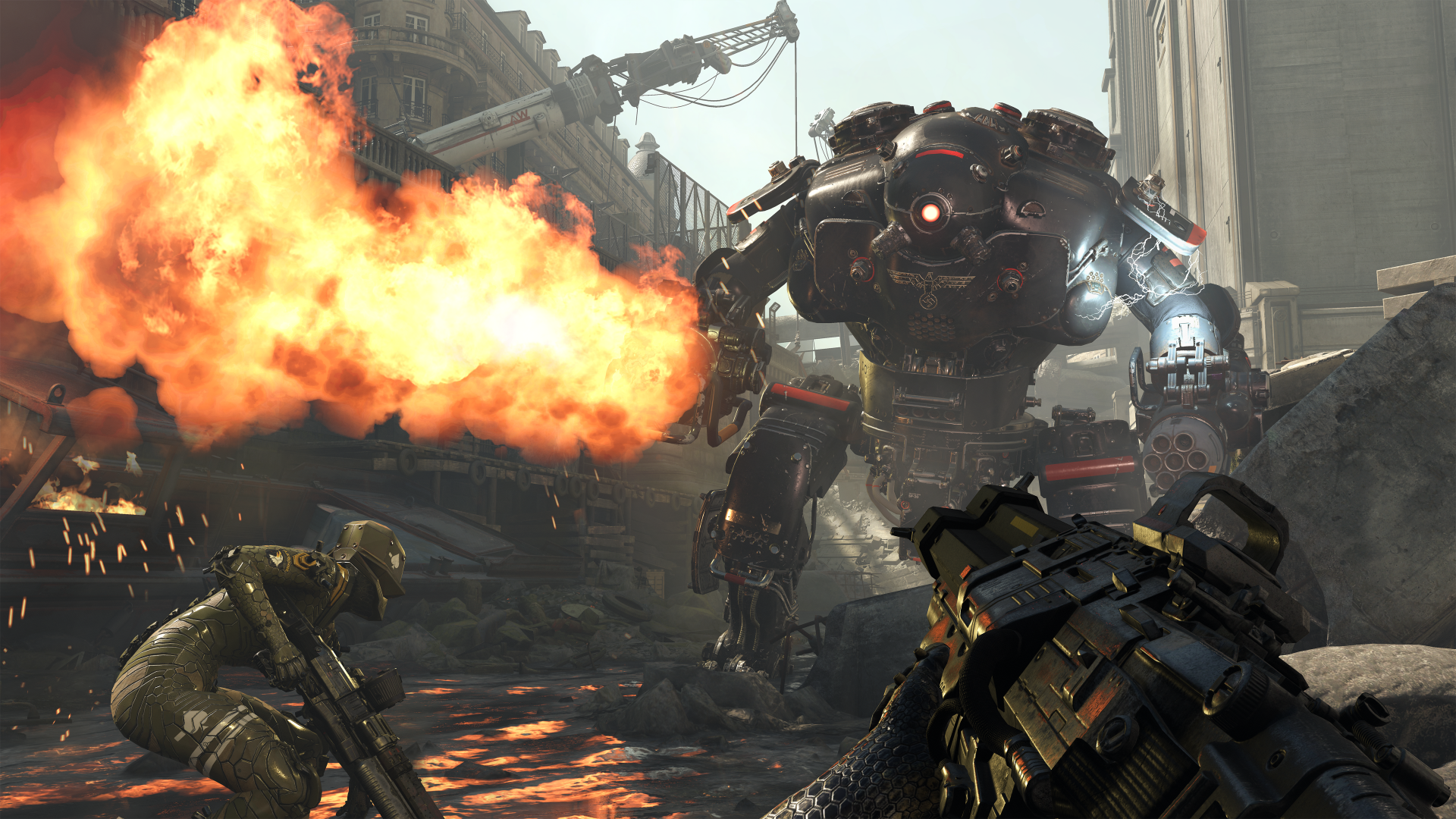 This new approach does, however, feel like it neuteurs your guns somewhat. Some enemies feel like you’re barely scratching them, despite how much your weapons buck and protest with each bullet. And because enemies scale with you as you grow in power, this is a feeling that will likely last throughout the game’s runtime. The upgrade trees don’t offer too much in the way of new abilities, either, so you can’t offset this loot shooter-feel with clever application of abilities, (though a new pep system does add a little tactical crinkle, allowing you to buff up your partner with a series of emotes).

I also felt like the game undermines its new openness with the way it handles enemy spawning. It doesn’t matter how well you plan your approach to a combat arena when enemies seemingly spawn in directly behind you, constantly. Stealth is too barebones to make much of a difference here as well, even with the addition of a new cloaking ability.

Still, these niggles could well be fixed for launch later this year. There’s an innate thrill to popping helmets from Nazi heads, and the well-acted and genuinely funny cutscenes are still some of the best in video games. With a budget price at release, Youngblood seems well worth taking a punt on to finally answer that burning question: what you can do with two hatchets, a Nazi, and a friend?