Dress like a prat by solving the puzzle of the gnomes.

Watch dogs 2 contains plenty of unlocks, secrets and hidden extras, one of which is this oddball gnome outfit. To find it, follow these steps and soon enough you'll be walking around in a horrendous pair of crocs, green leather trousers and a beard scarf. I don't know, either.

Firstly, what do gnomes like to do? They like to fish, of course. So head on over to the Fisherman's Wharf area, at the north of the map, and go to this restaurant. 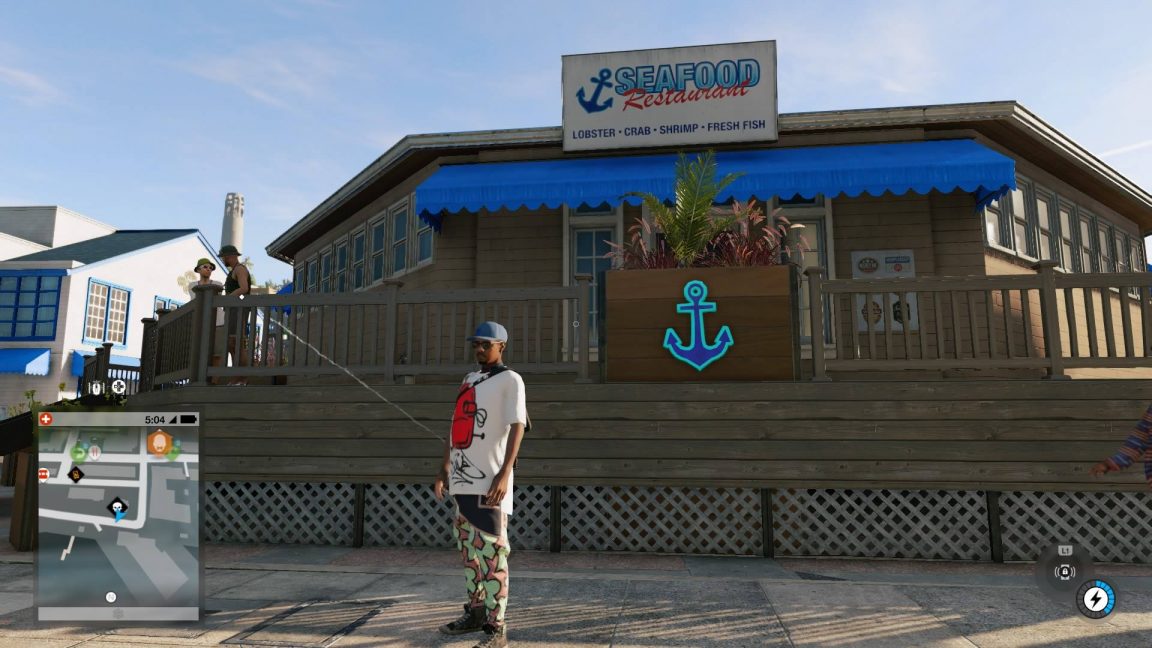 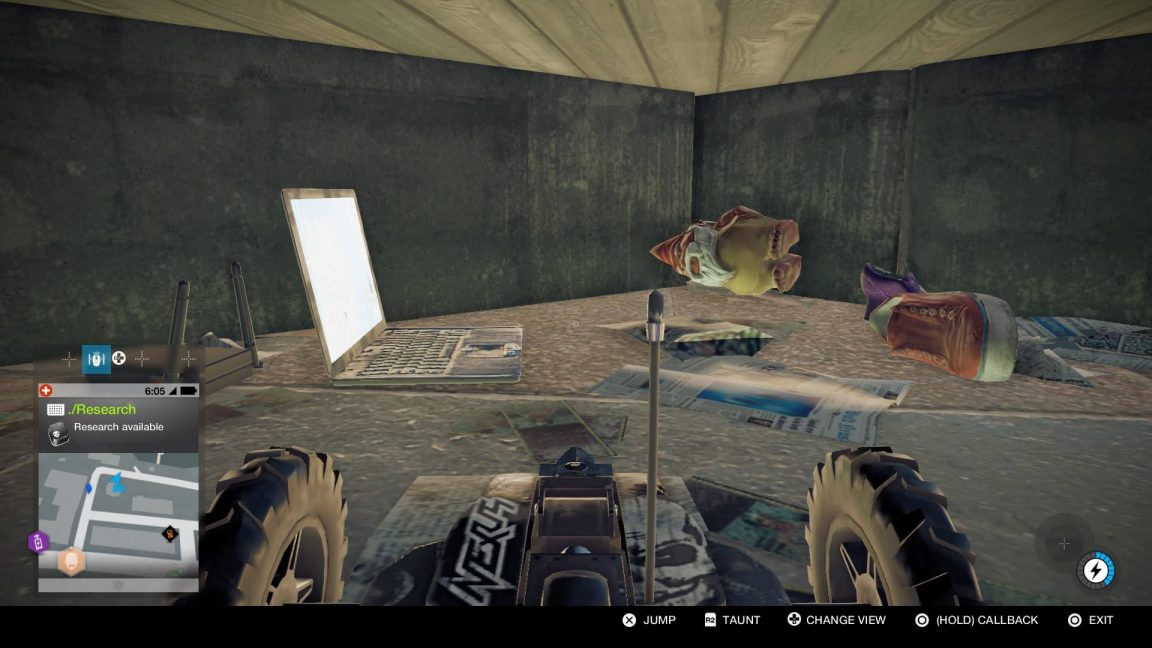 Focus the RV Jumper camera on the laptop, then press up on the d-pad to adjust the brightness. Adjust it down to -2 and you'll get a decent look at a map of San Francisco with 10 circles and 2 crosses marked on it. 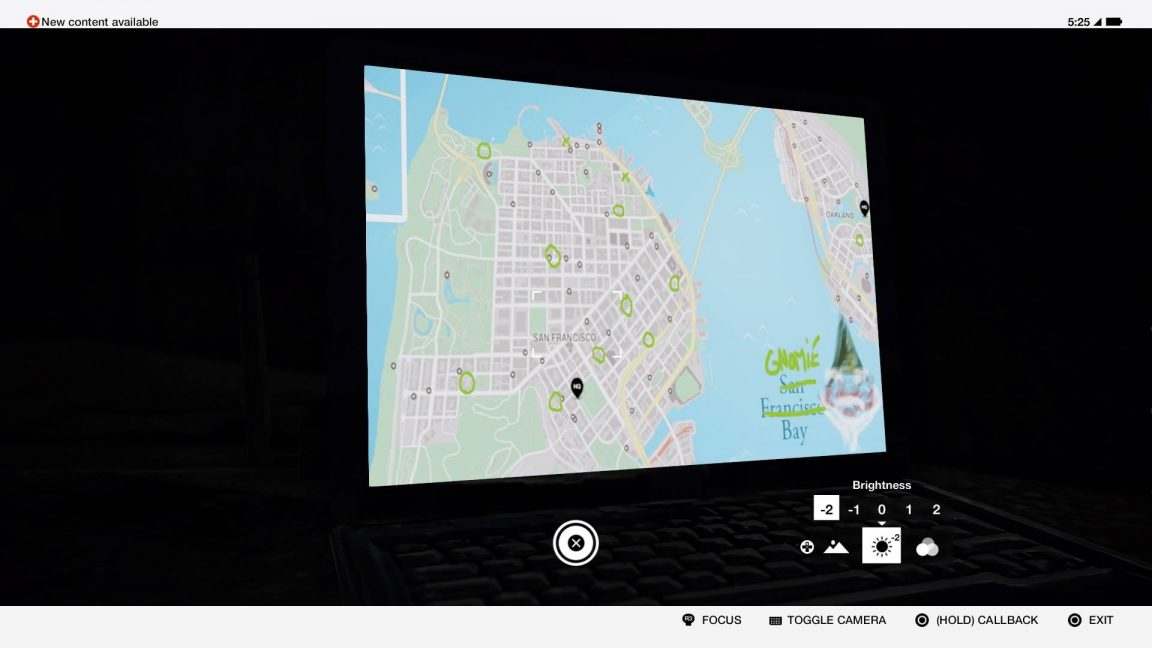 The X at the uppermost part of the map is your location here. The other X is where you'll find the secret gnome outfit, but first you have to visit all 10 circle locations and collect a gnome with a green hat at each. Once you have all 10, the gnome outfit will become available.

The good news is you can Fast Travel to the majority of these locations via clothing shops and other icons, so it doesn't take long to get the outfit.

Where are all the hidden gnomes?

The first gnome is at the top of a rooftop garden, on the block to the left of Painted Ladies. You can Fast Travel to The Dye Dude Kiosk on the corner opposite, then head over to the Doobie Donut shop, and around the right hand side until you see an opening into a courtyard. Look for the purple blossoming trees and go up the stairs. On the rooftop you'll see a bubble machine, some weed plants and your green gnome.

The next location is near the DedSec HQ, and you can Fast Travel to Stache & Vine, which is on the block opposite. Head over the road and round into the backyards. Careful, as this is near a restricted area, but you don't need to enter it. Climb onto the decking, up on the shed, and over the fence where you'll find this next gnome acting as lifeguard next to a hot tub.

This gnome is on a small block between a Drone Race marked on the map and the SF MOMA. Fast Travel to the Drone Race, then cross over to the Taqueria Mexican Food restaurant. You need to get on the roof. If you turn around when looking at the Mexican restaurant you'll see a handy crane on wheels behind you. Hack it to drive over to the restaurant and climb onto the roof. Around the corner you'll find the gnome staring at the wall, next to a teddy bear doing the same. Both are covered in blood.

This one isn't near many Fast Travel spots, but head to the Axle Boardshop and then follow the roads as pictured on the map. This gnome is at the back of a Restricted Area, but you can cheat by following the wall around until you see this gap with the graffiti "hey bay!" written on it. Send your RV Jumper through and look for the bathtub with gnomes, near the tents. You can pick the green gnome up using the RV Jumper and don't have to get into any trouble.

This is located at the Transbay Center, so Fast Travel to a local restaurant and climb the steps all the way up. Head to the red statue in the garden and near it is a triangular hedge. You're going to need to get the RV Jumper over that hedge. If you've upgraded it enough you can jump from the lower hedge to the highest, then over into the little enclosure where you'll find the green gnome lording it over the red gnomes.

If you haven't upgraded the Jumper enough, don't worry. Just steal a van or other tall vehicle and drive it up the steps into position. Try and avoid running people over in this pedestrian area as it'll trigger the cops. Then climb on top, get out the RV Jumper and hop it over the enclosure to grab the gnome.

This is on a block opposite the Haum Data Center. You're going to need a cherry picker or other high-reaching crane to get on top of a fairly nondescript bakery/bookstore. It's next to a small carpark and has graffiti of a unicorn shitting rainbows and money if you can't find it. Anyway, there's a small building site nearby, and you'll find a forklift truck which you can then use to lift a dumpster to create makeshift stairs. The green gnome is on top of the building, having a picnic with a bear.

This gnome is at The Tenderloin and you can Fast Travel to the pawnshop here. Go inside and it's on the shelf. Easy.

Location 8: Gnome hiding in an airduct

Head to this part of the map, to the left of a bunch of parks and north of the Embarcadero Center. There's a restaurant nearby you can Fast Travel to. This one is pretty tricky. Start underneath the bridge with the steps on your left. Run around the otherside of the steps to the alleyway and over the small gate. Once over the gate climb the short ladders and do a nethack scan.

You'll see there's a closed circuit terminal that you need to unlock. To do so, send the RV Jumper into the airduct at the top of the ladders underneath the grill. Now climb up further on to the rooftops behind you, following the newly revealed hacked line in blue. On the rooftop is another airduct that you can now unlock and send the RV Jumper in to grab the gnome and a Research Point.

Head to the top left of the map, to a spot near a pier. This gnome is in a restricted area, with barbed wire, guards, rottweilers, and all sorts of intimidating fencing. Despite that it's easy to get. Just hack the gate to open it, and send the RV Jumper in and to the right of the gate. The gnome is in a little house by the front fence.

This is the only gnome off the main map and in Oakland. Head to north east of the Blume Arena, and stand with the river on your left and a path going under the freeway. It's just above a restricted area. Head under the freeway/tunnel with the water to your leftt, and once you spot the two boats, dive in and swim over to them. Climb out and up the yellow ladder to find the gnome chilling on a chair.

Where is the hidden gnome outfit? 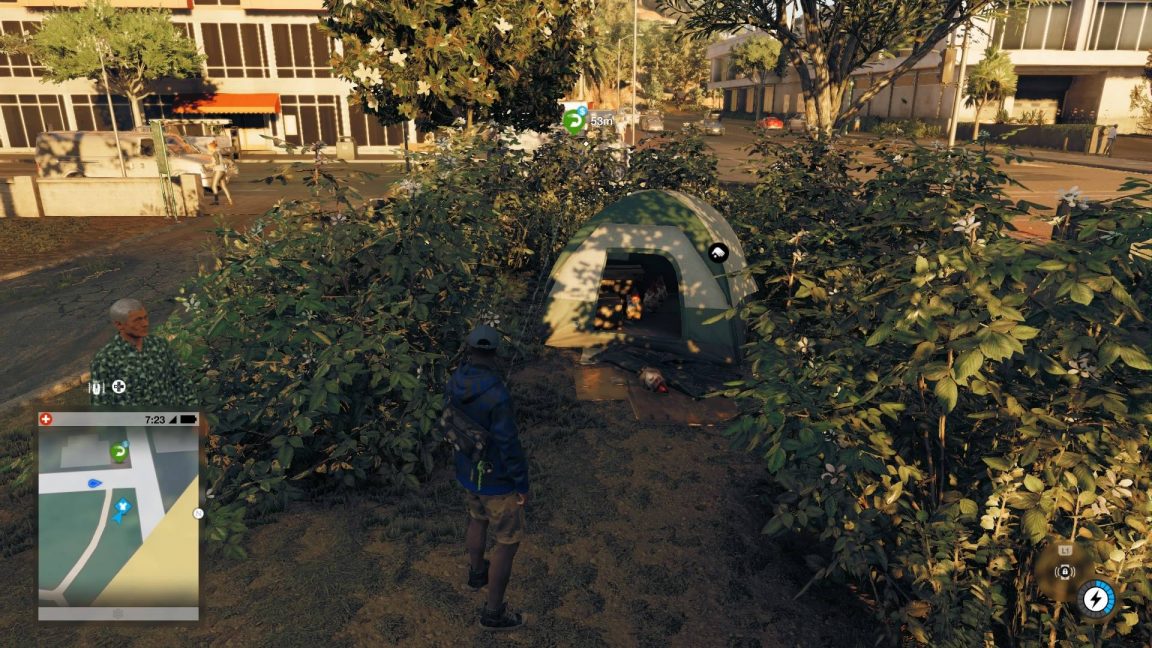 Now head over to the second X marked on the map. It's just below the WKZ Station in the park. Look for a tent, send your RV Jumper in to pick up a package and you'll get a message that a new outfit has been added to your wardrobe. 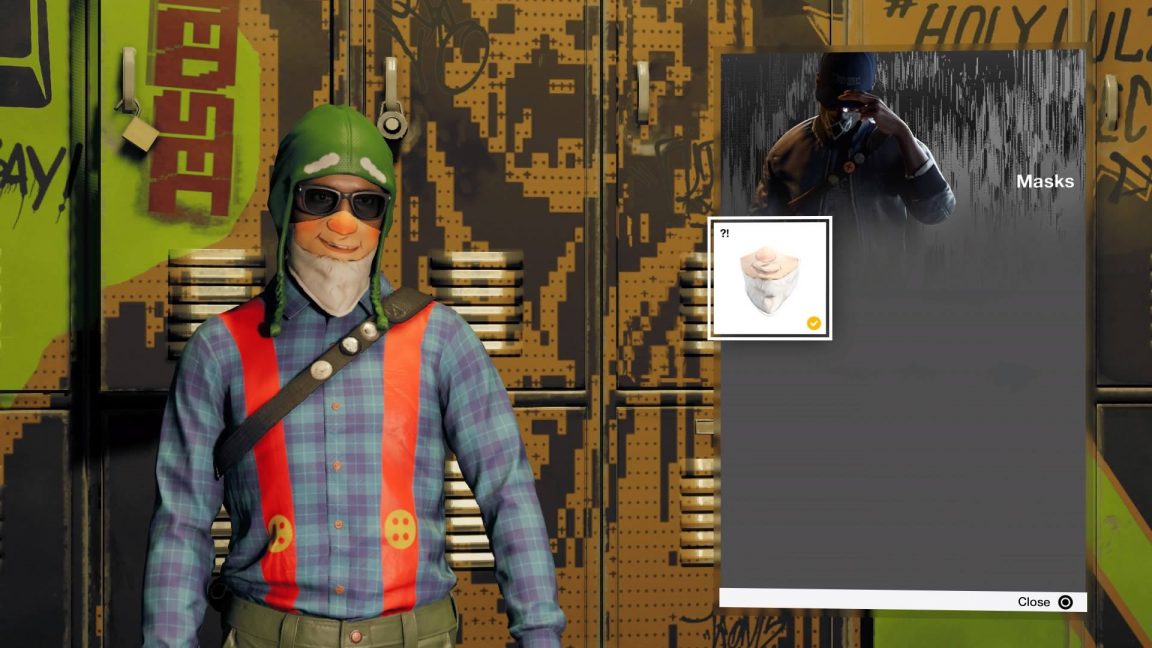 Now head over to the HQ and get dressed in your new clothes: green trousers, silly hat, crocs, shirt with braces and a gnome beard mask! Now, that was certainly worth it, hey.