Nintendo hosted its Nindies Showcase earlier today, detailing 20 of the many indie games heading to Switch.

Indie games featured as part of Nintendo's showcase today included offerings from the Super Meat Boy and Shovel Knight franchises, as well as collaborations with games such as Suda51's Travis Strikes Again: No More Heroes.

Let's skip rambling about everything and just get right to it, shall we? We've added additional information along with trailers and all descriptions were provided by Nintendo and individual press releases.

In this beefy sequel to the fan-favorite original game, players will once again leap off walls, dodge buzz saws and perform incredible feats of 2D platforming. In this game, though, levels get more challenging each time they’re beaten. With an updated control scheme, new ranking system and daily challenges, players are going to want to keep coming back for seconds.

Beat a level, it ranks, next time you play it you get a harder version of that level until you eventually master it.There are bosses, secrets, dying, awesome music, beautiful art, and dying. Also if that isn’t enough, there is a Dark World with extremely hard levels for those of you that like that sort of thing.

This final adventure in the Shovel Knight: Treasure Trove saga is fit for a king. Travel through four new worlds and 30 new courses to discover how King Knight ascended the throne and became one of the Order of No Quarter.

Play as King Knight, as he travels through four new worlds in order to best the Three Kings who rule over the land. Features platforming, fun visuals, action-packed courses, new bosses, collect tons of new weapons, armors, abilities, and followers and play a game of cards.

A year has passed since the events of No More Heroes, and The Bad is determined to exact his revenge on Travis Touchdown. Just like the original cult classic, players will have to battle through multiple punk-rock levels and defeat over-the-top bosses.

Travis Strikes Again: No More Heroes launches exclusively for Nintendo Switch in 2018. More details about the game will be revealed in the future.

This episodic tale is loved by many, and now it’s coming to Nintendo Switch. Kentucky Route Zero: TV Edition, which includes the debut of the long-awaited fifth and final act of the series, lands on Nintendo Switch in early 2018. It will also release on PS4 and Xbox One alongside the fifth act on PC (finally, yay!).

In the sequel to the award-winning original, as a lone Steambot in search ofa lost friend, her and an unlikely companion must dig deep, gain riches and explore an underworld riddled with danger. But time is running short, it seems.

Go it alone or team up with three other friends in this 2D side-scrolling action-RPG from many of those who brought you Mega Man Zero. The game features 30 large quests and four classes to choose from, players will have hours and hours of action to fight through.

Dragon: Marked for Death allows up to four players in either local multiplayer or online multiplayer.

Orcs, elves and humans have one thing in common – a need to feed. Battle Chef Brigade is one part combo-based action game, one part match-three puzzler and an all-around feast for fans of 2D animation.

Battle Chef Brigade features fantasy chefs, including Orcs, Elves, and Humans, who need to hunt dangerous monsters for ingredients. With those ingredients, before the critical eye of the judges, the chefs create culinary masterpieces in an intense tournament. Battle Chef Brigade pairs one part combo-based action hunting and one part puzzle-based cooking, all as the round clock ticks down.

Most role-playing games are about slaying dragons or retrieving mystical crystals, but this RPG lets players equip golf clubs instead of swords. It features a dramatic story with a diverse cast of characters to meet, golf challenges to beat, upgrades to earn and equipment to collect.

Golf Story combines the sheer excitement of golf with a serious story that plays out over eight different courses. Play the story of a golfer who is forced to give up all that he holds dear for one last shot at accomplishing his dreams.

But all is not so simple in the world of golf. To best today’s players you have to be able to keep up with them both on and off the course.

This rhythm-based action game lets players bust out fresh moves, earn respect and recruit dancers through a variety of locations. Play the game’s single- or multiplayer modes with either traditional or touch-screen controls.

This breakdance game features dance battles, freestyle gameplay, and funky beats. Discover original hand-drawn animation, a fresh soundtrack by Kid Koala and innovative controls that allow you the freedom to play the way you like. Lead your crew of bboys and bgirls through the city, unlock new characters & locations, battle against your friends, discover new combos as you rock to the beat, and find your style.

Get nostalgic for the classic beat-’em-ups of the ’80s and ’90s with Wulverblade, a rich, hand-drawn, two-player co-op, 2D action game set in war-torn ancient Britain.

Wulverblade is a side-scroller set in ancient Roman Britain. Two players battle side-by-side to defend the northern tribes from the invading Roman army. Fight across eight real locations as the rich historically inspired story unfolds before you.

Flex your engineering muscles in this bridge-building simulator that proves it’s just as fun to fix things as it is to watch them fall to pieces. Hundreds of levels and hours of physics-based puzzles will gear players up to create their own incredible bridges and puzzle levels to show their friends.

As one of the last survivors of humanity, players must explore an underwater world and hunt down monstrous creature/machine hybrids in this side-scrolling shooter.

The Great Climate Shift" struck at end of the 21st century. Ninety six percent of the earth's surface is underwater. Human civilization has fallen. Machines have adopted the shape and form of marine animals.

The ocean is full of creature-machine hybrid monsters. You are a "Hunter" and the new journey begins…

Earth Atlantis is a side-scrolling shooter with an original "Monster-Hunting" gameplay. Search and hunt down dreadful sea monsters and explore the post-apocalyptic underwater world. Unlock multiple ships with special weapons and abilities for your journey and become a legendary hunter!

The game is presented in a very unique and artistic "Old Sketching" visual style, which expresses the essence of the 14th century's ocean exploration when the sea was considered a dangerous place full of monsters.

Everyone dies in this community-driven online action game. But once one person dies, an echo is left behind. The next hero can then revive them as an AI companion. Choose from nine heroes and wield various weapons.

Next Up Hero is an arcade action-adventure driven by Community Continue, in which players take turns fighting and dying against tough-as-nails monsters, one hero at a time. Revive fallen heroes to fight by your side, build your army, and take out the boss together. Everyone dies. Heroes continue. 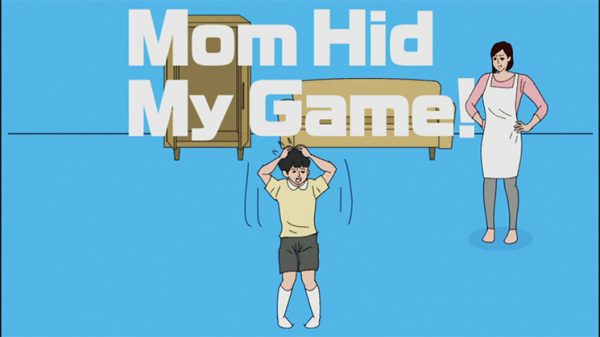 Players must push their imaginations to the limit in this seek-and-find game about, well, seeking and finding a game. Mom Hid My Game will release on Nintendo systems with exclusive stages.

Dive into northern Mexico’s breathtaking landscapes with Mulaka, a 3D action-adventure game based on the rich indigenous culture of the Tarahumara. Renowned for their impressive running abilities, embark on the journey of a Sukurúame – a Tarahumara shaman – as you fight back the foulness corrupting the land, while drawing upon the powers of demigods. From solving puzzles in environments inspired by real Sierra Tarahumara locations, to heated hand-to-hand combat with creatures pulled from the region’s mythology, find out why the Tarahumara have earned a reputation for being superhumans.

Mulaka will also be released on PC, PS4 and Xbox One in early 2018.

Yono and the Celestial Elephants (Neckbolt Games, Plug In Digital) - October 12 (PC too)

Many adventure games have a distinct lack of elephants … but that’s all about to change. Yono is here, and he’s basically a one-elephant army that runs, opens chests with his trunk, head-butts bad guys, sprays water and throws explosives. You know, normal elephant stuff.

Elephants are a mighty protectors of the world, born from the stars once per millennium. This is the age of Elephant Yono. But Yono is still so very young and in a kingdom inhabited by feudal Humans, undead Bonewights and robotic Mekani, it’s not easy to keep one’s trunk out of trouble.

Yono and the Celestial Elephants is a grand adventure, featuring carefully designed puzzles, treasure hunts, a sprinkling combat and a world full of people. Play as a young elephant tasked to save a world he’s never seen before, and explore the rich history of a kingdom where humans, zombies and robots live side by side.

A new trailer that debuted during the Nindies Showcase showed off the uniqueness of this upcoming shooter. In the game, each weapon hit transfers mass from the victim’s inflicted limb to the corresponding limb of the wielder of the weapon.
As an immediate consequence, skilled players become tall and easy to hit, whereas beginners shrink until they become difficult targets. Highly skilled players may therefore play with casual players in the same match and both can enjoy the Game. Your skill will not be expressed by your kill-death-ratio, but by your body size.

Different body sizes require different strategies. A player with tall legs can jump on buildings, small players can hide in tiny holes. The size of every limb has an impact on your abilities and properties. For example the behavior of your butt-rocket depends on the size of your lower body. A successful player adapts to his own body-size.

A successful team builds its strategy around the body sizes of its members. In team games the team avatar combines the sizes of all team members. The team with the tallest team avatar wins. Friendly fire does not change your team’s avatar size and can therefore be used to implement advanced team tactics. Shift your team mass from one player to the other to get your whole team to an advantageous position. Or designate an offensive player and shrink him to make him difficult to hit. Then, once he grows by decimating the other team, transfer his mass to your defensive players by showering him with friendly fire. Used the right way, friendly fire can be a crucial part of your team strategy.

Sausage Sports Club is a physics game about floppy-necked animals competing on a reality sports TV show. Duke it out with up to eight friends in Free Play, where you'll compete in tons of game modes like Soccer, Sumo and Capture the Flag. Players can also explore the toy-filled Overworld and get to know the show's other melodramatic competitors in a 1-4 player replayable Adventure mode. You'll unlock new characters, skins, hats and arenas along the way.

One to four players will manipulate a magical clockwork board in this turn-based multiplayer game featuring real-time challenges, devious opportunities for misdirection and, of course, lots of loot. With procedurally generated boards, players will never play the same game twice.

In this local and online co-op game, up to four players battle strange creatures and mighty bosses while wielding an ever-changing arsenal of spells. Nine Parchments is a blast ’em up with plenty of magical mayhem.

Nine Parchments combines real-time spell-shooting action with RPG elements – level up your character and collect magical loot, filling your wardrobe with a myriad of wizard hats and powerful staves.

Nine Parchments will also release this holiday season on PC, PlayStation 4 and Xbox One.

Many of the aforementioned titles as well as others will be on-hand at PAX West this weekend at the Nintendo booth. If you happen to be attending, be sure to stop and give some of these a go.