Creative Assembly has been quiet since the release of Total War: Warhammer, presumably because it's been working on this massive update. 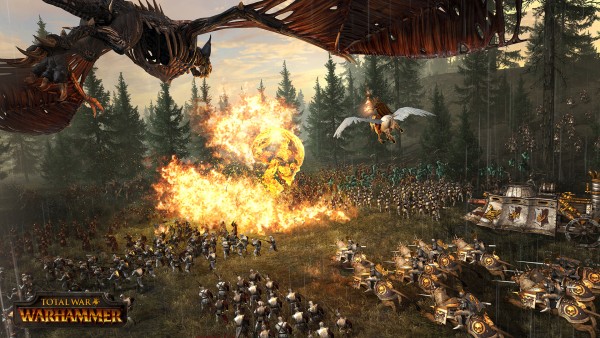 A new Total War: Warhammer patch will be released later today. Update 1 is the first major update for the game since its release in May, and it's full of changes as well as new content.

The big news here is the addition of the Blood Knights units for the Vampire Counts, a tier 5 shock cavalry. A beta for DirectX 12 is also included with the update, if you decide to opt in.

AI heroes have also received a sweeping balance pass, lowering the amount of XP they get, and reducing their success rate on Easy and Normal difficulties. In addition, hero traits as well as actions that damage the entire enemy army have also been adjusted.

Five new multiplayer maps were added, too, alongside a big list of multiplayer-specific fixes.

For magic heroes, direct damage spells have had their damage adjusted according to context. Various other spells and abilities have also received various adjustments.

You can see the full list of changes through the Wiki link. It's absolutely massive, but details all the changes, including faction and race-specific buffs and nerfs, and lists all the fixed bugs.

This update will go live today at 2pm BST, 1pm GMT, 6am PST, but no word yet as to the size.