During the opening ceremony at BlizzCon 2016 today, the studio announced two new zones coming with the Necromancer class for Diablo 3, after artwork for it leaked earlier in the week.

All hail the Priests of Rathma

According to Blizzard, the Necromancer class have holed themselves up in the jungles of Kehjistan training to keep a balance between the forces of life and death.

While the studio said details on the class are still "coming together," it provided some initial information on the characters, which can control the dead.

Necromancers draw magic from death and can command armies made up of those they have risen. And they can make corpses explode. Nice.

Along making corpses explode, the class will also make use of the following abilities: Bone Spear, Siphon Blood, Blood Rush and Summon Skeletons. A full set of legendaries and set items are planned for the Necromancer, including the class-specific scythe as their main.

Where the Witch Doctor has a more "light-hearted" take when using supernatural powers to command denizens of the jungle and zombified pets, the Necromancer's magic is much darker. 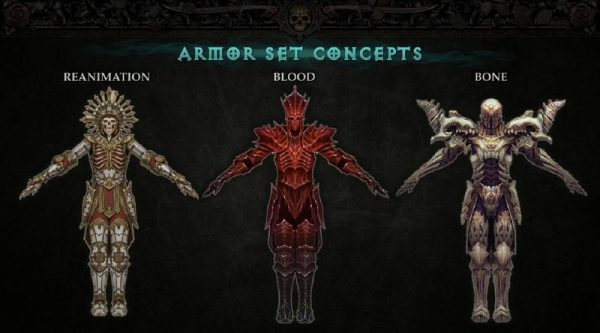 Gameplay is also more controlled and centered around blood and bone. They are also experts of curses, reanimation, and their pets "obey their every command."

Blizzard said the female Necromancer is still in the design phase, but provided a bit of concept art.

The Necromancer will be made available as part of the Rise of the Necromancer pack, set to release in 2017. You will need Diablo 3 and Reaper of Souls to access this content on PC. If you are a console player, you will need the Ultimate Evil Edition on PlayStation 4 or Xbox One.

Along with the Necromancer, the pack comes with an in-game pet, two additional character slots, two additional stash tabs on PC, a portrait frame, pennant, banner, and banner sigil. A price has yet to be determined.

The two new zones coming to the game with the Necromancer are the Shrouded Moors and Temple of the First Born. These can be played in Adventure Mode and come with their very own new Bounties and events.

Shrouded Moors is a harsh, inhospitable land has been abandoned for centuries. But within the perpetual fog, a dark presence is stirring.

Temple of the Firstborn is an ancient monument to the earliest nephalem. The temple is hidden beneath the surface of Sanctuary, where it has "escaped the notice of most mortals."

Additional details on the new zones, Necromancer, and other updates coming to the game next year were promised for a later date.