“An eye for an eye leaves the whole world blind.”

This adage about revenge is even truer in a world ravaged by cordyceps: a parasitic fungus that takes over human physiology, mutating people until their heads pop like corn, folding eyes under flaps of skin and growth, leaving hosts gnashing and clawing in the dark. If humanity can’t unite, these eyeless horrors will inherit the Earth.

The Last of Us is a character study of a smuggler and a survivor - Joel and Ellie - trekking across post-apocalyptic America. The original game opened with Joel’s daughter being killed, and he carries the guilt of being unable to save her across the US with him as emotional baggage. He offloads that baggage onto Ellie, a teenager who’s immune to the outbreak - his self-appointed surrogate daughter. By the end they share a Stockholm Syndrome-esque affection, bonded through shared trauma.

Once they reach the Fireflies - a group who claim they can fashion a cure from Ellie’s DNA - Joel discovers the procedure will kill her. He assaults the hospital, guns down the surgeons, and escapes with Ellie still sedated. When she wakes, he says they just ran some tests and discharged her. He lies. The Last of Us Part 2 deals with the consequences of both the killings and the lie.

Fans of the original might be concerned that forcing a story with such a perfect ending to continue would tarnish the original’s legacy. Fortunately, that isn’t the case. This is a companion piece that manages to introduce new characters and themes while also making the original story stronger simply by existing. Conversations that you’ve forgotten take on new meaning, beloved characters become more nuanced. When it ends, it imprints the same satisfaction of a story well told, packaged within Naughty Dog’s best game.

It opens with Joel talking to his brother, Tommy. “I saved her,” he says as the camera cuts to a bloody hospital corridor filled with bodies. Three syllables explain how Joel justifies himself. He didn’t kill them, he rescued Ellie. But he stripped away her agency, and he knows he’s no hero. 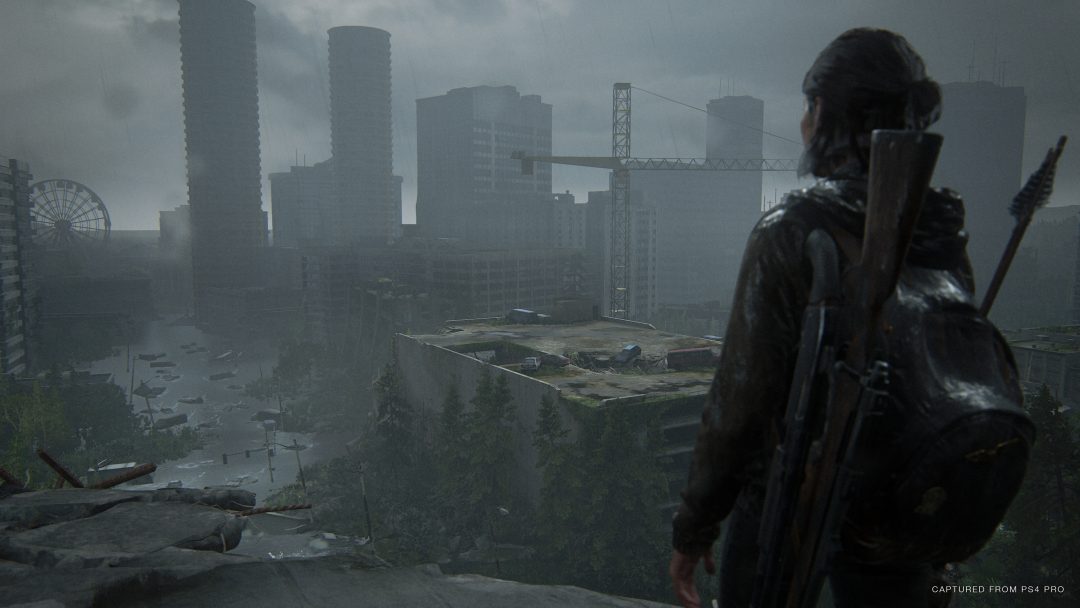 Where the original game opened with explosions, this prologue is more understated, poignant. It’s a story about facing the consequences of your actions, how everyone finds their inner strength in a different place, and how revenge can spiral out of control until you lose everything.

We play as Ellie four years on from the lie, living some semblance of a normal life in the walled town of Jackson. Joel occasionally visits her cabin to tell her dad jokes. She listens to music on a cassette player, and a lava lamp bubbles away on her desk. Sketches and posters litter the walls of her room. In Joel’s cabin, there’s woodwork tables, wooden carvings, and family photos. On his bedside table sits a pair of reading glasses and a book, An Idiot’s Guide to Space - his way of attempting to rekindle their paternal relationship. The world is stuffed with little details like this that enrich the story and reward your curiosity.

It is the morning after the winter dance and Ellie's getting ready for patrol. She gets her backpack, grabs her pistol, and cocks the slider with a yawn. She doesn’t curse under her breath when people get curb stomped anymore - violence is normalised, and this is just an ordinary day. Until it isn’t. 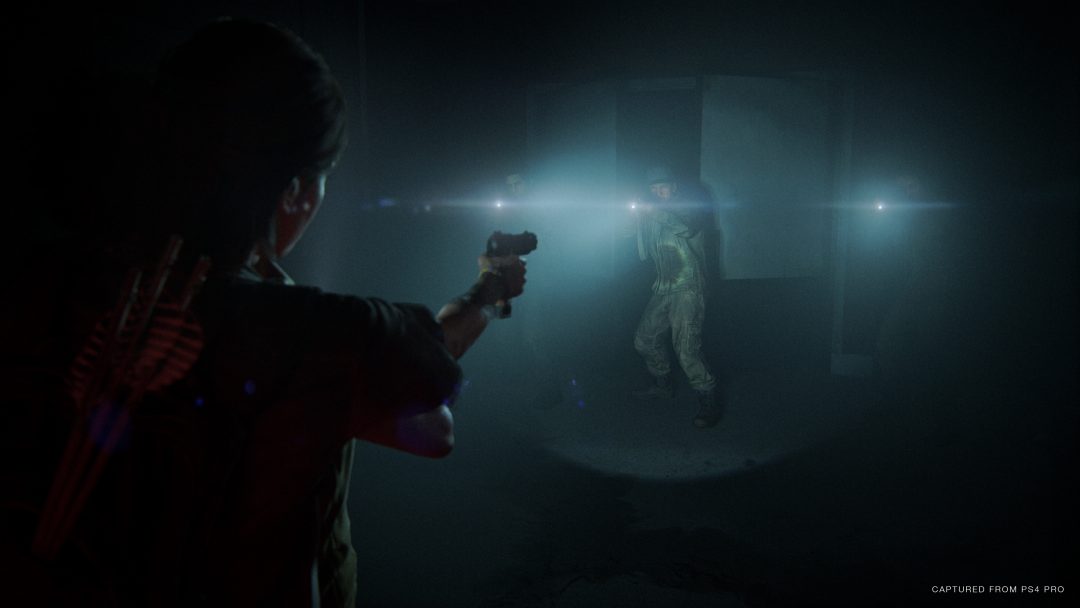 The main story takes place over three days, as opposed to the four seasons structure of the original. At the same time, it jumps back and forth from the past to the present, introducing characters you initially hate before making you fall in love with them. It manages to be hopeful, bleak, funny, sad, peaceful, and frightening, running the gamut of human emotion, but masterfully paced out so you’re never overwhelmed.

Every character is complex and human. It might be Naughty Dog’s biggest game, but it’s the studio’s leanest script - you’re trusted to understand subtext. The dialogue has an almost surgical precision to it. It also does things I’ve never seen before, in ways only video games can. It is a generation-defining masterpiece.

There’s a structural pattern that’s similar to other Naughty Dog games, of course. You see a landmark, you head towards it, and you have pockets of adventure along the way. There are hub-style areas where you can explore optional buildings around Seattle, but the majority of the game is linear - tailored maps with multiple routes through ruined buildings, via underground train stations, and lush, overgrown parks. There’s surprising variety to the places you visit, though, and a strong sense of discovery, awe, and exploration, despite that linearity.

It builds slowly - it is hours before you fight any humans - with relationships and character growth at the fore. You pick through buildings and see the ghost of a world that’s alien to these young survivors, scavenging for supplies, ignoring the whiteboards filled with pitch-meeting notes and profit forecasts. It earns its action and that lends it more impact as a result. 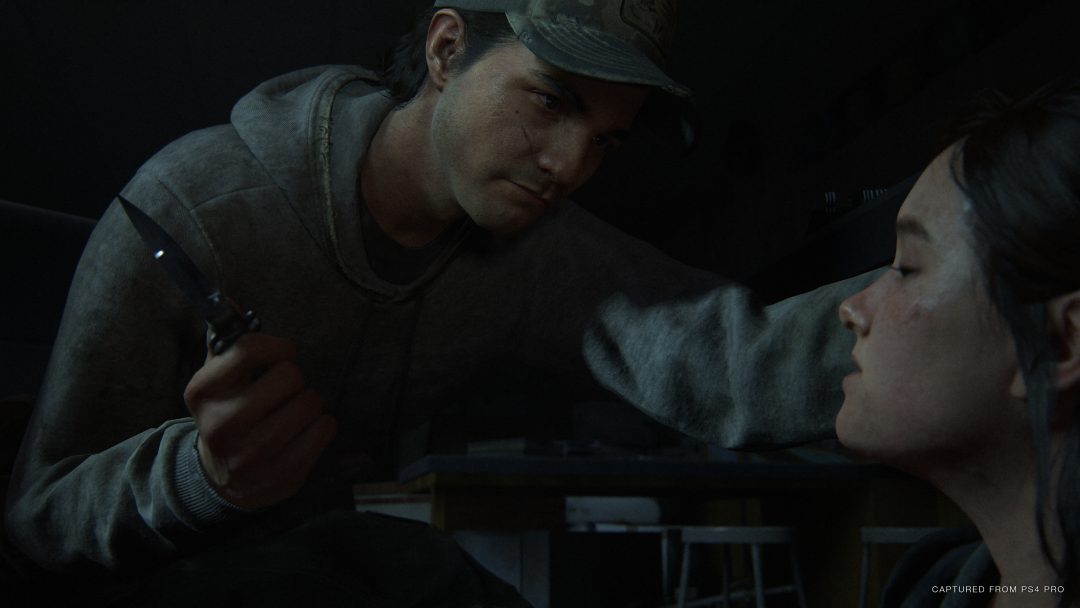 Things ramp up in intensity as the story goes on, but it’s interspersed with those aforementioned flashbacks. These give you room to breathe when the main story is going full throttle. In one, you explore a museum with Joel and Ellie. There’s no combat, just two characters bonding as you interact with props. It’s one of my favourite sequences in a game ever, and lands harder than any virtual bullet.

It’s not something I expected going in, but The Last of Us Part 2 reminds me of Metal Gear Solid 5 mechanically. You spend much of the game laid prone in the grass, slithering between patrol routes. You cut through and around buildings, slip through small gaps, and hide under trucks and trains. It’s stealth that’s designed to keep you moving, to keep you reacting and improvising, to keep you clenching your jaw - and not just because you don’t want a bloater to rip it off.

Level design is Naughty Dog’s best, each encounter offering multiple routes and opportunities for stealth, action, and a blend of the two. You’re constantly segueing in and out of stealth as you pick off enemies with guerrilla tactics. It makes you feel like a deadly hunter one minute and timid prey the next. The AI coordinates, using vantage points and pincer tactics, flanking and flushing out: they pull you by a leg as you hide underneath a truck; they sweep buildings like a SWAT team. It’s more dynamic than the original - unpredictable and exciting. 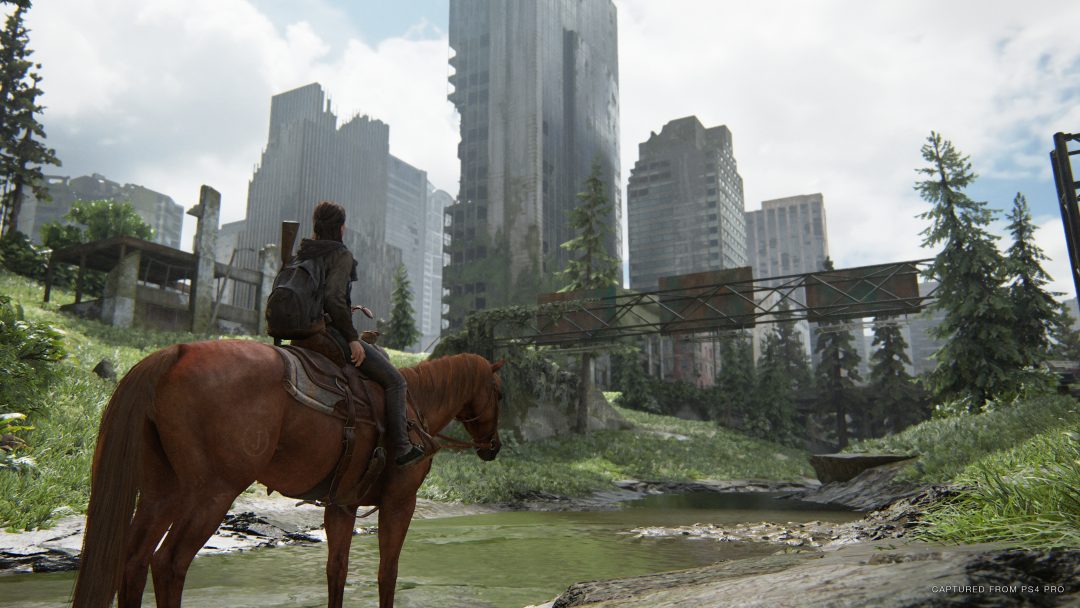 In one scene, the two main enemy factions are fighting, one side standing in the flooded streets and the other in a ruined building overlooking the open space. I park my boat and crawl, fully submerged, through the knee-high water. The Seraphites, a group of religious fanatics who communicate via whistles (which are somehow more unnerving than the echo-location clicks from an infected) are winning. They’re raining down molotov cocktails on the WLF (or Wolves) below. Covered by the screams, I crawl onto a waterlogged bank, pull out my rifle, and take aim at a Seraphite through my scope. I pull the trigger and skull fragments explode from the back of his head, alerting the others.

As I continue picking them off, I’m distracted by nearby splashing so I pull my eye from the scope to see two of them swimming at me, one from each side. I switch to my shotgun and take one of their heads off, using the last remaining shell to rip the leg from my other attacker. From the building, I hear their allies screaming their names.

When I first played The Last of Us Part 2, I misunderstood the intent behind this. Every single human in this game has a name, and soldiers call out for their fallen friends and use names in idle chatter. I thought this was to make you feel guilty for shoving a switchblade into their neck, but it’s not just that. 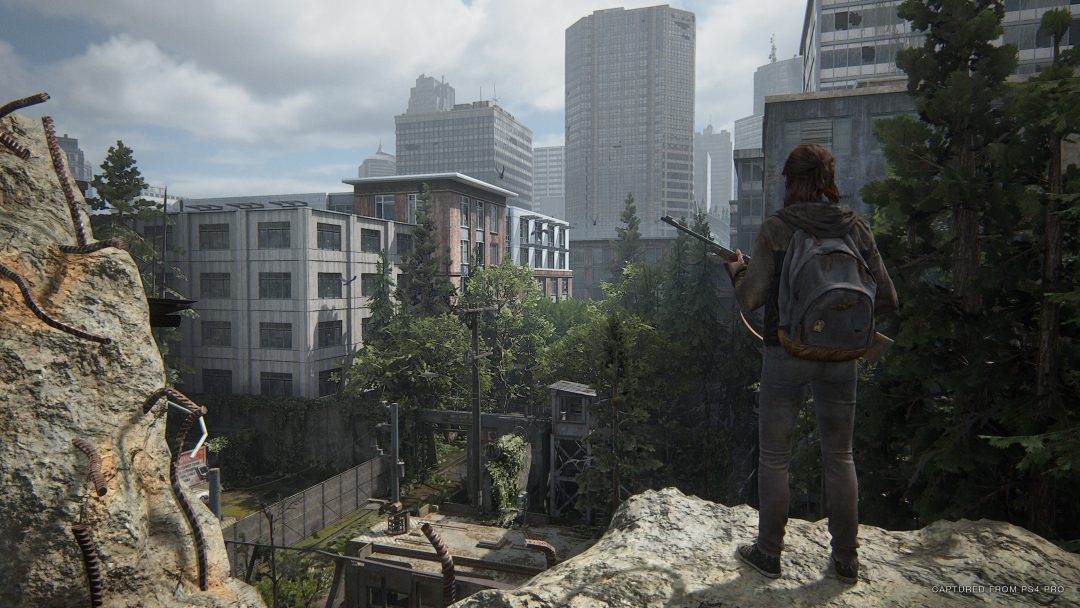 Naughty Dog names the enemies in The Last of Us Part 2 as a thematic choice. This is a story of revenge, and names remind you that these aren’t faceless drones: each person you kill could leave behind a loved one who might want payback. Good and evil is a matter of perspective in a lawless world where people act on survival instinct. It’s holistic - gameplay and story in harmony. Even a minigame where you pluck at the strings of a fully functional guitar serves a purpose in the larger tale.

Every mechanic and story beat reinforces the themes. Combat is scrappy and messy. Incoming shots sometimes knock you onto your back where you’re free to return fire in a desperate effort. In one scene, Ellie kills someone who’s playing Hotline Miami on a PS Vita. She looks so ordinary, but she attacks you. It’s self defense. The next minute she’s bleeding out on the floor as the music from her portable console rings out. It’s fitting, because the aftermath of each battle reminded me of Dennaton Games’ indie hit.

Hotline Miami features a repeating cycle of top-down violence punctuated by a slow walk back through that carnage, over bodies and through corridors painted in blood. It wordlessly asks you to reflect on your violent deeds. 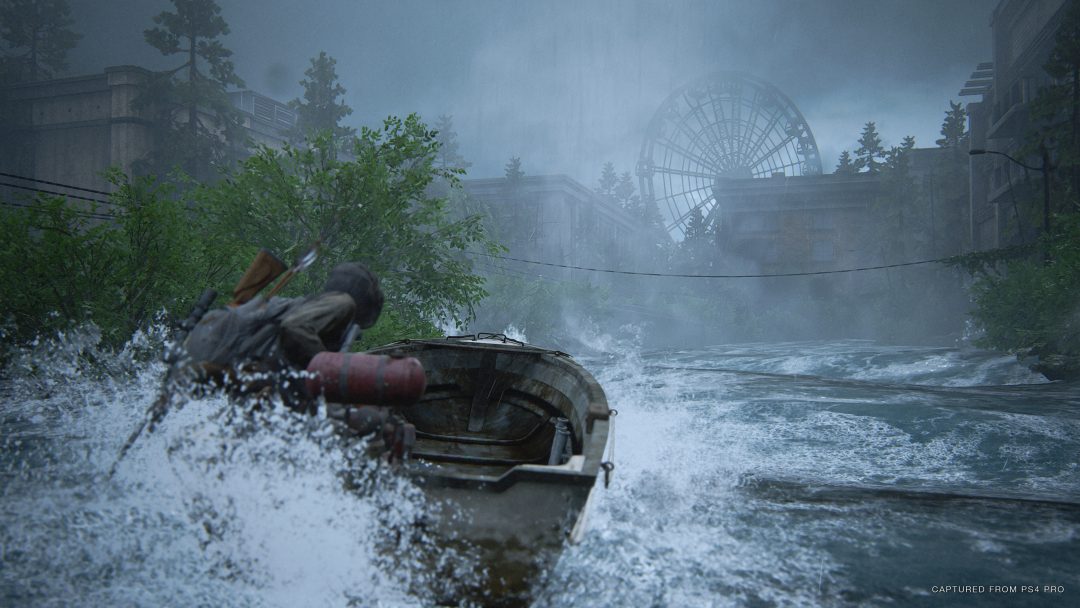 Here that same feeling translates to a 3D, photorealistic scene. Bodies lay limp with jaws ripped from their face, teeth missing, blood spilling from the exit wound. Shoot someone with an explosive arrow indoors and a chunk of flesh might stick to the ceiling and drip down in the aftermath - a thick splash of liquid and unidentifiable body parts where a human once stood. Shoot someone in the throat and they die with a gargle, bleeding out and twitching as blood pools around them. It’s horrific, but it all works together to create a mood of unease.

The brilliant acting makes everything land harder. When the characters cry out, you feel it. When they say one thing and mean another, you get it. Every little facial tic, every shaking hand - Ashley Johnson, Laura Bailey, Ian Alexander, and Shannon Woodward all put in the performances of a lifetime, but even most of the side characters leave a lasting impression.

When the credits rolled on The Last of Us Part 2 I was still buzzing from the excitement of the final few hours. My loyalty shifted between characters. I grew to love who I hated and dislike who I loved. I laughed, I teared up. I felt anger and elation. It’s the new high water mark for video game characters and I can’t wait for everyone to see just how special it is. As soon as it ended, I booted up New Game Plus and I’m experiencing it again with my eyes open, the context of the finished story imprinting new meaning into those early scenes and characters. I’m not swiping in the dark anymore.