Missed out on the Hori Split Pad Pro for Nintendo Switch? Good news, it’s coming back in a new range of colours and is available to pre-order right now.

The hugely popular and officially licensed controller attachment for the Nintendo Switch has previously only been available with a design inspired by Daemon X Machina. Although, in fairness, that seemed to extend to just a fancy ‘X’ button and some shaded analogue sticks.

These new versions come in basic black, red and blue colours – nothing that’s too over the top or garish, then.

Pre-orders for the new Hori Split Pad Pro have been available from Amazon, though it seems it’s put a pause on them temporarily. Maybe they don’t want to accept too many in case only limited stock arrives? Either way, you can check them out below. 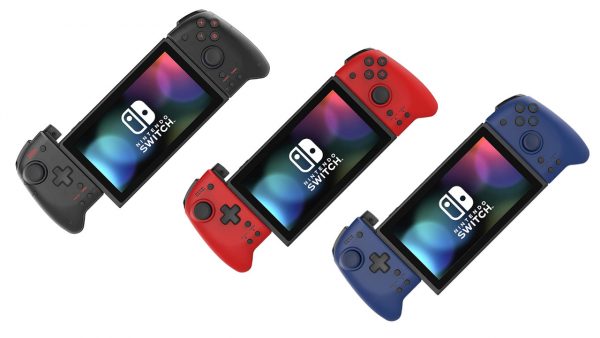 Why would you want the Hori Split Pad Pro? Well, it’s perfect if you play a lot of your Nintendo Switch in handheld mode. The dinky Joy-Cons can cause some serious cramping after a while, so this is like having a full-sized controller in your hands.

One thing to make very clear, though, is that this set attaches to the side of your Switch where the Joy-Cons would usually be placed. You can’t combine them to make a wireless controller and they won’t fit the Switch while it’s docked. Also, motion controls, HD rumble and NFC are not supported.

You do, however, get programmable rear triggers, a turbo function and assignable buttons. So, worth? Especially if you play a lot of more involved RPGs or action games where all these extra will come in handy.

The new Hori Split Pad Pro for Nintendo Switch is scheduled to launch in the US on 7th September. There’s no word on other regions just yet. You can also check out our other favourite Nintendo Switch controllers over on Jelly Deals.