The Division has a new end-game challenge, and it's a little more complicated than past efforts.

The Division Underground DLC introduces a new Incursion called Dragon's Nest, and it's not as straightforward as its arguably disappointing precursors.

To help you triumph over your foes, Arekkz has provided a video guide, and we've summarised his insights below.

The Dragon's Nest Incursion should take about 15 to 20 minutes on first playthrough on Hard difficulty, and involves some slightly more involved play and mechanics than The Division's previous efforts.

Dragon's Nest has you going up against the Cleanders. Although the Cleaners field some powerful units, they don't rely as heavily on shotgun rushes as other factions in The Division - so that's one less thing to worry about. This gives you time to catch your breath and reposition between knots of foes.

Dragon's Nest begins simply enough with a short climb and a trot to the objective.

When the doors blow up things begin to heat up, ah ha ha, with a bunch of flamethrower units among the enemies that come pouring out - so mind out for that rather than rushing straight in. Because this first encounter takes place in a corridor with little cover, the quickest and safest way through is to target the tanks on the flamethrowers immediately; in the confined space, this is devastating on enemy ranks. With the weaker units down you can focus on fire on the flamethrowers one at a time, back-pedalling along the corridor until they're down.

The next room is just a matter of patiently picking off enemies as you cross to the stairs and reach the roof. Once you get to the carpark the Incursion kicks off properly.

The carpark is broken into multiple areas, each with a sort of mini-boss enemy among the foes you'll encounter. In the first area you'll encounter a mob of Cleaners of all unit types, including an upgraded version of the Technician with a remote controlled incendiary robot. Be warned that these set the ground on fire when they blow up, so you must keep them under control. If they get behind you and your team is bunched together, they can easily wipe your whole group.

Once all the mobs are down you'll face the area bosses, the Horsemen of the Apocalypse (Death, Pestilence, War and Famine). They spawn in the four corners of the carpark, and will be joined by adds - so keep an eye out for those Technician's robots again. More adds spawn as each of the four bosses go down, so it's worthwhile clearing each wave -or at least the nearest mobs - before you knock off the next boss.

One good way to tackle this encounter is to climb the short stairs to a catwalk with some cover overlooking the area, where you can use abilities in relative peace and comfort. This also means the bosses will trot towards you in a comparatively manageable fashion; take down Death as quick as you can, using headshots to sun him, and you'll have some time to focus on the other three as they approach. Pestilence will then be ripe for picking off, with the other two bosses still some distance off.

When all the bosses and adds are down, collect the loot (each of the horsemen has a loot drop chance) and head down the elevator shaft. Fight your way through the next room, then on to the final room of the Incursion for the major battle, activating the laptops as you pass. This is where things get really tough. 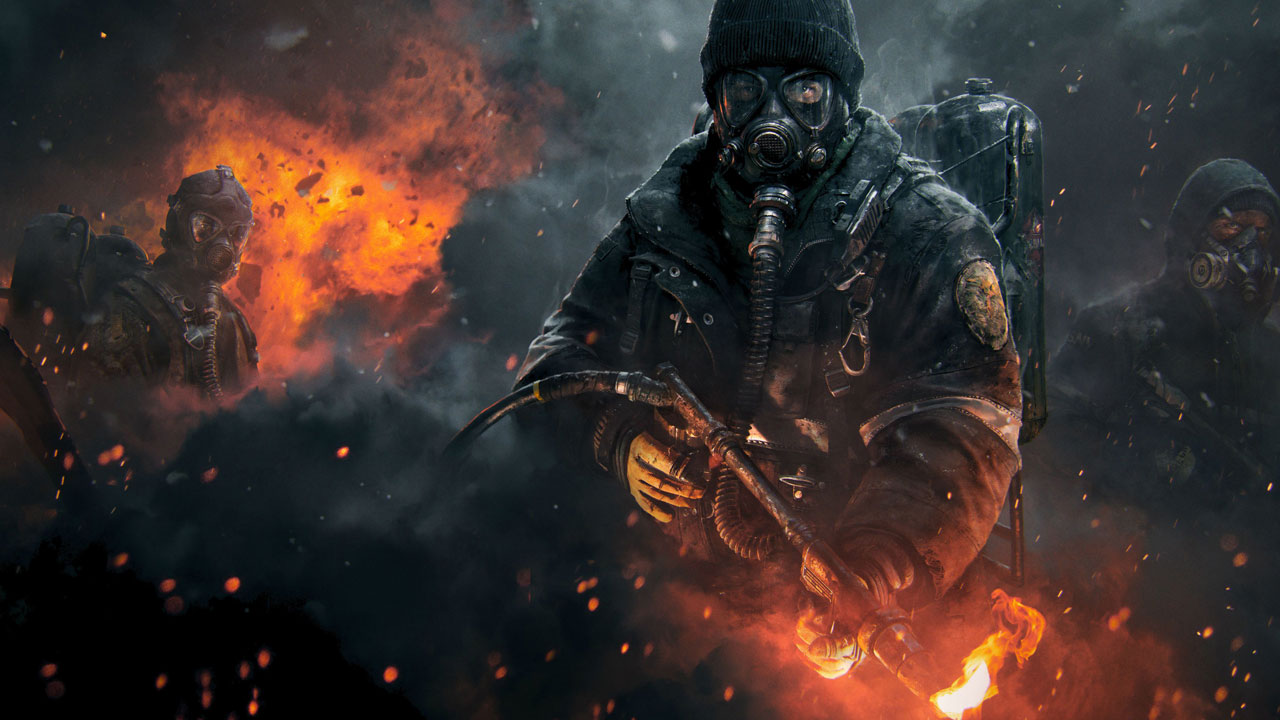 Like the tank in Falcon's Lost, the final Dragon's Nest room features a firetruck. It's not just a matter of a wave battle, though; there are some simple raid-like mechanics at play. You'll need to communicate and you can't just hunker down in one place.

There will be adds throughout the battle, including shotgunners, snipers and standard assault rifle grunts. More of a worry are the firetruck's regular attacks; if you notice a red zone on the floor, you need to move immediately; the ground will shortly be inundated with fire. While the initial blast won't kill you if you don't make it out in time, the flames that follow are likely to - Exotic Resistance gear is a big help here, and the Support Station with the Immuniser mod will also assist.

To progress through the battle you'll need to activate a total of eight switches throughout the room. They're arranged in pairs on either side of the arena, and you must press them in pairs - two players synchronising their movements - to move a water tank forwards through the room. You must start with the set furthest from the firetruck, and it's important to keep your distance from the firetruck until as it has a very deadly close range attack it will unleash if you approach before you reach the final set of switches.

Between each successful switch pair activation, you'll face a new round of adds. When the adds go down, the firetruck will go berserk, setting the whole room on fire. There doesn't seem to be anywhere safe to go when this happens, so you'll need that Exotic Resistance or Support Station with Immuniser.

Assuming you survive, you then rinse and repeat for the remaining three sets of switches, moving towards the fire engine. When the final set of switches has been pressed, the boss is defeated and you can just mop up the adds.

The Division: Underground is out now on PC and Xbox One, and will arrive on PS4 in August. If you're struggling, we have a guide on how to get tThe Division Underground DLC working and how to level up Gear Score fast in the Division update 1.3 now that the cap has been increased.

Need Incursion buddies? The Division The100 has you covered.