Spider-Man may be the next free game available with PlayStation Plus this June.

The standard edition of the Insomniac Games title is currently listed on the PlayStation Store for free, which suggests it could be the next game available with PlayStation Plus starting next week.

But so far Sony has yet to make any official announcements, so take it all with a grain of salt - this could just be yet another PlayStation Store glitch. 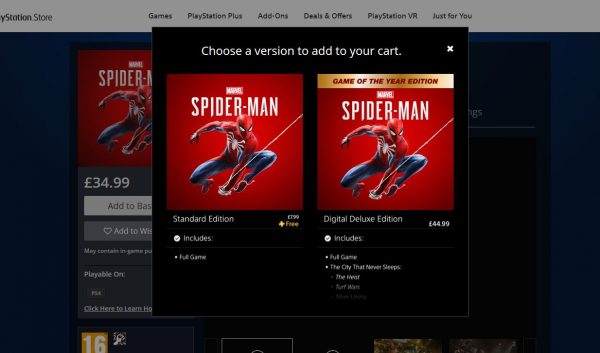 The game was spotted on the UK version of the PlayStation Store. The game is full price until you add it to your basket, which prompts a choice between its different editions.

Its Digital Deluxe Edition is still priced at its typical £44.99 pricepoint, but the Standard Edition is shown as free right next to the PS Plus logo. At full-price, this edition appears to be on sale for £7.99, down from its standard £34.99 price point. We've reached out to PlayStation for comment and confirmation.

Released in 2018, Spider-Man was the top-seller on the UK game charts for two weeks straight upon launch. The PS4 exclusive was also the fastest-selling game in the UK for that year. You can read our Spider-Man review right here.