Skateboarding is hard. So is Session.

The idea of a game that simulates skateboarding seems like one out of time.

Skateboarding and the extreme sports genre burned brightly in the early 2000s, but as the Tony Hawk's games were worn down through yearly iterations and novelty, and EA's Skate series clearly didn't bring in enough money, extreme sports fizzled out. It's still with us in different ways, perhaps; Rocket League's mad take on sports spectacle, or Olli Olli's one-chance endless runner platform hybrid. But a game where you carve along concrete and pop a tre-flip off a funbox seems as dated as baggy jeans and tiny wheels.

But skateboarding itself is alive and pumping, with multiple styles and tricks celebrated, and new blood, not least in the proliferation of female skaters turning pro. There's a lot to celebrate about a culture that's had its days in the sun and the rain, swinging between big sponsorship and mainstream acceptance to outlaw status and dismissal, and then back again.

Session, from Canadian developer Crea-ture, aims to capture the essence of skateboarding - perseverance, creativity and the freedom to have fun. It's current free demo captures that perfectly. It's hard, frustrating, unforgiving, without fireworks or spectacle. It gives the player a big space, and tells them to go find fun. It's a brave way of presenting your game, goalless, but it's already finding its niche having confidently ripped past its Kickstarter target and a bunch of stretch goals. There's an Early Access build planned for the second quarter of next year on Xbox One and PC, too. It's rolling along at quite a pace.

Session is hard immediately. The controls, designed so that the two thumb sticks simulate your feet on the board, require the player to think about their positioning, balance and weight transfer. This is not the Tony Hawk method of tapping a button to ollie, and it adds a lot more to Skate's sweeping left stick collection of tricks. It's this that makes it immediately daunting, almost player unfriendly.

I caught up with Crea-ture's Marc-Andre Houde to ask why he's going for the hardcore approach, how Session will grow once it's released, building legendary skate spots and how to find the fun in hard concrete.

VG247: The control system picks up Skate's stick approach and takes it further, with each analogue stick representing a different foot. It initially seems too complicated - what's the early feedback on that?

Marc-Andre Houde: About a month ago we were still concerned because there wasn't a big crowd of people who had tried the game yet. Now we have a prototype demo out there and we've really started to gather tangible feedback we definitely think we've got something with these controls. We know it's hard. Maybe it'll be something that we'll warn people about; this game is hard, and don't expect to be the best player in 10 minutes. We're glad that it starts at a difficult level, because my best years of gaming were playing difficult games. Sometimes I feel like we've been zombified. Everything needs to be so easy and accessible. It's almost like pre-grinded meat that you don't have to chew.

I remember the controls of the Skate series took some getting used to because we were so used to the Tony Hawk's Pro Skater controls where buttons were for tricks, not sticks. You're going for a simulation approach, which feels as frustrating and thrilling as the real thing.

It think it's the essence of the game itself. We want to get the skaters who play games and that's pretty evident. But beyond this I'm a really passionate person about skateboarding and I want to share that. By making this game difficult I feel that we're transmitting this thing about skateboarding: it's a difficult sport but it's really rewarding when you put the hard work into it. I think the difficulty makes the identity of the project. Players struggle with the triggers and they wonder why we're using two thumbs sticks and that we've overcomplicated it. Well, yeah, maybe.

But we also see it another way. We're thinking differently with this concept. We're not asking you to turn with the triggers, we're asking you to move your weight and put pressure on the trucks, so it makes sense. And we use two sticks because most tricks on a skateboard are not done with one foot. So we're replicating this motion of two feet with thumbsticks. We're really trying to implement weight transfer. 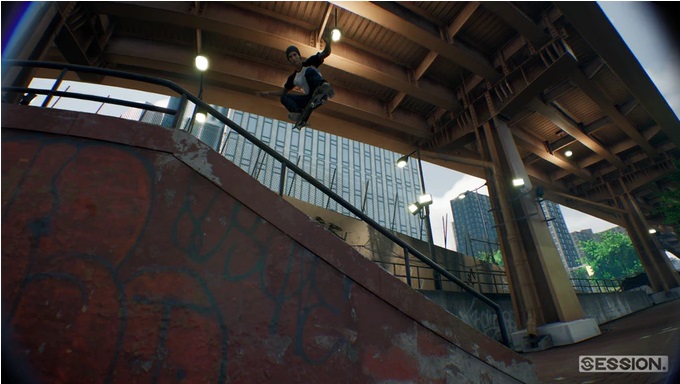 You're talking about balance and foot placement, as you'd approach a trick on a real skateboard.

Yes. Or think of it as playing drums. When you first start playing the bass drum it's really awkward, you're trying to synchronize and disconnect the motion with your hands. Playing drums is difficult and it's not for everyone. But that doesn't mean you can buy a drum kit with an automatic bass drum. Already we've seen plenty of videos of of people doing some great tricks so that tells us it's working and people are getting exactly what we hoped they would. They spend 10 or 15 minutes working on really complex tricks but when they land it, it's a real moment for them. There's no points on screen, no score, there's no real goal right now, it's just a toy. I think this is what's beautiful about session right now. It's just a small demo but people feel really rewarded and enjoy it because they're setting themselves their own goals.

You're letting players do their own thing rather than setting arbitrary goals. That's the state of the game now, but are there more traditional achievements planned for the final game - a high score, opening up more areas as you play, unlocking content?

With this demo it's all about the controls rather than what the final game is going to be. We want the interactive part of the game to come outside of the game and connect it with livestreams; have people playing together, throwing challenges at each other, some competitions. Instead of having an automatic scoring system that comes from part of the game based on the amount of spins or flip tricks you did, we want it driven by the community. So people will vote. We're trying to flip the concept of objective scoring to subjective scoring. Having people on a live feed scoring something at the time. We're don't know, it might be extremely difficult to have thousands of people handing out random scores, it might give some really funky results. We want to be really active with creating custom events and more contextualised content; trick of the week, skater of the month. And doing all of this in this Session world.


Vert skater Elliot Sloan is the first pro named for Session. Here he is shredding with Steve Caballero.

Again, that sounds very true to skateboarding. The encouragement to do well from your peers is more important than a medal or whatever. Pushing for creativity in tricks and overcoming risk, rather than competing against one another to be "the best".

That's it, exactly. And I think having pro skaters in the game will help that idea. Elliot Sloan is involved in the vert section of the game. We're currently working on that. I'm excited about getting him here, building a vert ramp set-up and putting him in a motion capture suit. That would be fucking gnarly. Right now we're working with a motion capture studio and it's really expensive. It's a weird dream but if we end up with our own motion capture studio the first thing I've said is we're building a mini-ramp in the studio. That's priority one. We have lots of contributors, contractors, right now who skate. So on Fridays it's going to be beers and the mini-ramp.

You're using heat maps to track where players are skating the most in your map - can you talk us through that a little?

We keep talking about having the community involved but we don't want them to feel forced or obliged to share their experiences. It's a game and if they pay for it then they want to have fun and our part of the deal is to make sure they keep enjoying themselves. We're not planning on doing Session 2, Session 3. We're not in this to milk it. That's not our mindset. We're going to make Session and then we'll update it, we'll fix things as long as people are playing the game. We'll add more cities and skate spots.

The heat map is something that's quite visual for non-developers to understand. We're building a city but don't want to build a skatepark version of New York. We're starting with New York and there will be a bunch of other cities in the long term. One of the beauties of skateboarding is you show up somewhere in a city and let your creativity go nuts. We want to keep that in the game. We don't want to build a city with quarter pipes everywhere and it's easy to do insane tricks off everything. From the heat maps if we can see that there's a section of the city that nobody enjoys, then we'll close it off. We'll spawn some construction signs and players will see that they can't skate there for a couple of weeks. We'll modify the map, make it more appealing and more fun and then open that area back up again.


Manhattan's legendary spot the Brooklyn Banks are being recreated for Session.

How do you see the final structure of the Session world? As interconnected cities, skateparks, levels, or a larger open world?

We have a clear idea of the structure. It won't be one big open world that connects New York and San Francisco and Toronto and Montreal. Right now we're working on the Brooklyn Banks. We've been there for a week and taken tonnes of references and we want to make sure it's as accurate as it can be. We want people to feel that jumping the twelve set is almost as difficult as it is in real life. From there we'll have some less accurate streets of New York, but these will bring you to other legendary sports in New York. We'll keep adding to those and when we feel New York is big enough we'll jump onto another city. I'm hoping we can have a dedicated team per city. And again we'll start small and grow with feedback and make sure each city has its own style of skateboarding.

You've got a filming mode planned as a stretch goal which uses a second player rather than just capturing your own footage. So one person skates, the other films?

For me, it's one of my favourite features. I was kind of bummed when we had to put this as a stretch goal but if we want to make this game a success we need to make sure the core is really solid. But I find filming inspiring and it's a big part of skateboarding. Having this team work with your friends, where you might not be the one pulling the big tricks, but you're the one making them look gigantic. The idea is to offer a new control scheme, possibly first person, so you can skate around your friends and focus while he's doing his line. And then having quick access to quick edits or a montage and upload it within a few minutes. It's still early at this stage, we're in a concept stage. But we're sure this is something the players would really enjoy.

Sessions' Kickstarter is live until December 21. At the time of writing it's funded, with extra cash going to stretch goals.