During the events of Sekiro: Shadows Die Twice, a twist occurs that changes the game’s world in bold, meaningful ways.

We’re going to discuss heavy story SPOILERS in this piece, so turn away now if you've yet to experience them yourself.

One of Sekiro: Shadows Die Twice’s most interesting narrative techniques is how it uses the events of its story to alter the game’s world. On the surface, this manifests in new, deadlier threats, and a refresh to existing areas of the game.

But it goes deeper.

FromSoftware is certainly no stranger to that style of storytelling. The team’s sparse method of delivering the narrative continues to rely on players’ willingness to read item descriptions, regularly talk to NPCs, and observe the world itself to fill in the gaps intentionally left there by designers. Though major story beats occur in cutscenes, the developer seemingly wanted to surprise players in other, more immediate ways this time around.

Sekiro’s story essentially has three phases. I hesitate to call them acts because they don’t follow the traditional act structure; but I digress.

The first phase is the least interesting in that regard. This is where your time will mostly be spent exploring the world, gaining power and making headway through the main quest. Not much changes in Sekiro at that point, outside of those changes of your own making. The story does move forward in that phase, but unlike something like Bloodborne where the world gradually shifted in response to your actions, it’s only really Sekiro’s characters who acknowledge your various deeds.

On your journey to obtain the McGuffins necessary for the main quest, you’ll inevitably reach the last one. At that moment, the game’s story will enter its second phase. 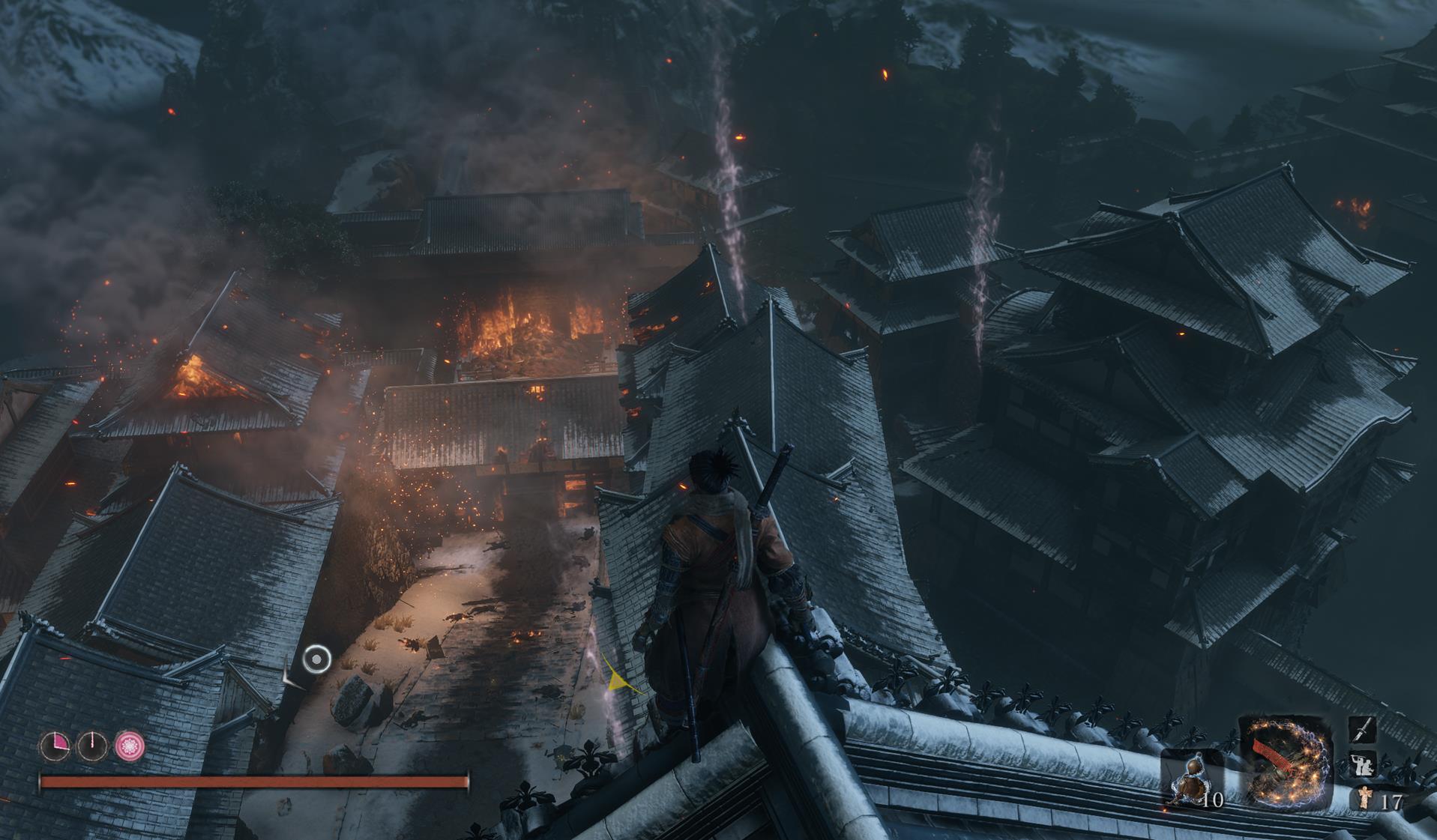 Now that you have what you need, the next logical step is to head back to Kuro to progress the story. This is when you discover that things have changed in your absence.

The first thing I noticed was that I could no longer use the Sculptor’s Idol in Kuro’s room, or most of the major spots in and around Ashina Castle. I initially thought it was a bug. I don’t remember bonfires disappearing in Souls, so I wasn’t quite sure what to think. But this is clearly, exactly what the game wants. My confusion slowly made way for a feeling of unease; something must have gone horribly wrong. Nevertheless, I could only push on.

The only way to get to where I needed to go at that point was to travel to the nearest available Idol and work my way from there. I vividly remember the scene that awaited me as I emerged from the Dungeon Entrance. Not a cutscene, mind you, but a big change in an area I was very familiar with. Entire sections were cutoff, and most of the castle was set ablaze.

The standard samurai guarding the place, which had given me trouble on many occasions, are cut down. Those that remain are either running, screaming for their lives, or howling over their fallen comrades. Sekiro’s combat ensures even weak trash mobs remain a threat for hours into the game. Even at that point, I was still cautious around them, and I certainly wasn’t planning on killing everyone on my way to the top of the castle.

If those enemies are running scared, what monstrosity could be driving them away? This is the moment I realised shit is about to get real.

It’s at this point it becomes clear that the various Idols didn’t go dark by accident, or as a result of a bug. Something, or someone, is responsible for doing it. Moments later, I met my first invaders: a pair of red hat-wearing goons. There wasn’t any time to learn their moves because they crushed me right then and there. I was so stunned I forgot to use a revive. These are mini-boss-level enemies - just one of many now running the show.

This is the new threat. 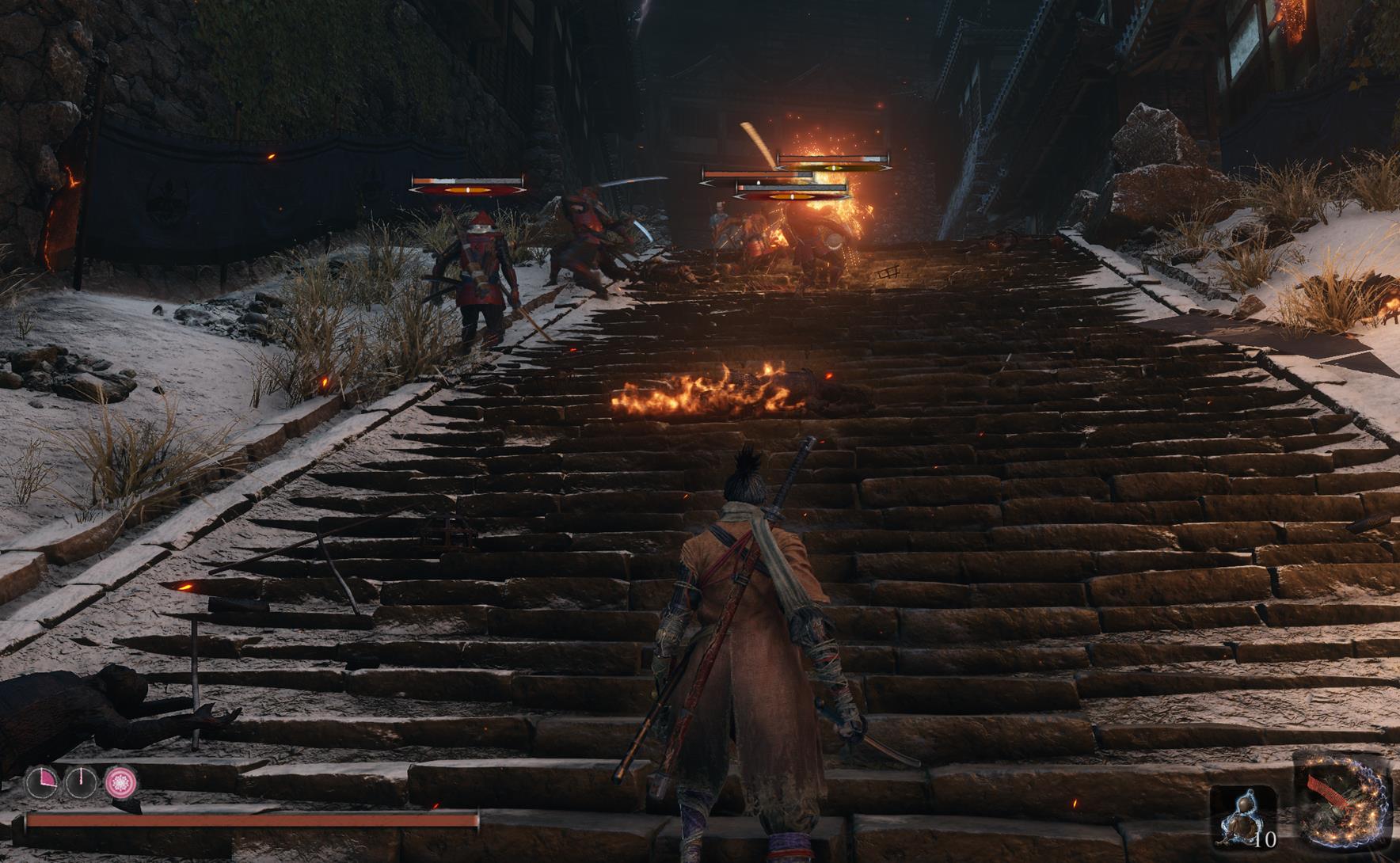 For the next few minutes, all I could muster was trading a few of blows before escaping to the rooftops. Though I wanted to investigate further; maybe reactivate a few of those Idols, I was anxious to get to Kuro to see if I can understand what the hell is going on. The desire to figure out the mystery was stronger than my interest to learn the moves of those new foes, so I kept on going.

On my way to the top, I found the Nightjar assassins slaughtered; replaced with tougher enemies. Predictably, they're even more challenging than our evasive friends. The Nightjars gave me a terrible time before, so seeing them defeated only added to the weight of the moment. When I reached my destination, I still couldn’t talk to Kuro - and I soon found out why.

The jig is up. Sekiro's foster father, Owl, is alive, and he’s revealed his true intentions. It was all coming to a head, so it made sense that Ashina’s fall, too, has arrived. The invading force is, of course, the Interior Minister’s army, finally able to break through the city’s defences. The story doesn’t make it clear whether the troops’ arrival is somehow linked to Owl, or if it’s just a coincidence.

After all, the war between the Minster and Ashina’s garrison was already well underway at the start of the game. The arena where you fight Oniwa during the game's opening is a battlefield strewn with the bodies of fallen Ashina warriors and invading forces alike. Perhaps my actions thus far thinned their numbers enough to give invaders the break they needed to breach? I could only wonder.

This shift in the landscape is impossible to miss. If you ignore the updated layout of some of these spots, you won’t miss the tougher enemies everywhere. And, now that most Idols are gone, you’re going to have to cut through them to reactivate the Idols that remain. The Ashina Castle and its outskirts are no longer what you remember, and the only thing you can do about it is claw back some of that lost ground.

It’s common to see story beats alter the look of a game’s world, but never to that extent. By taking away the convenience offered by Sculptor’s Idols, Sekiro uses a tangible game mechanic to tell a story. Anyone who played FromSoft’s work knows the respite these checkpoints provide all too well. They’re the only semblance of a safe space in these games’ unforgiving worlds.

The reassurance that no matter what happens, you can always come back at a nearby point cannot be overstated. This made it feel personal. I fought my way to find and activate each and every one of those Idols, and I did so blindly in the early game; unfamiliar with the layout. For the game to take that away without warning made me more invested in the conflict.

More than that, I could no longer rely on my memory of these areas' layouts and enemy placements. Discovering new zones and learning the routines of their protectors has always been one of my favourite parts of From's games, but it felt strange to have to do that with the starting area. It sent a message that nothing is off-limits, not even the safest spots in what I only thought of as early game. 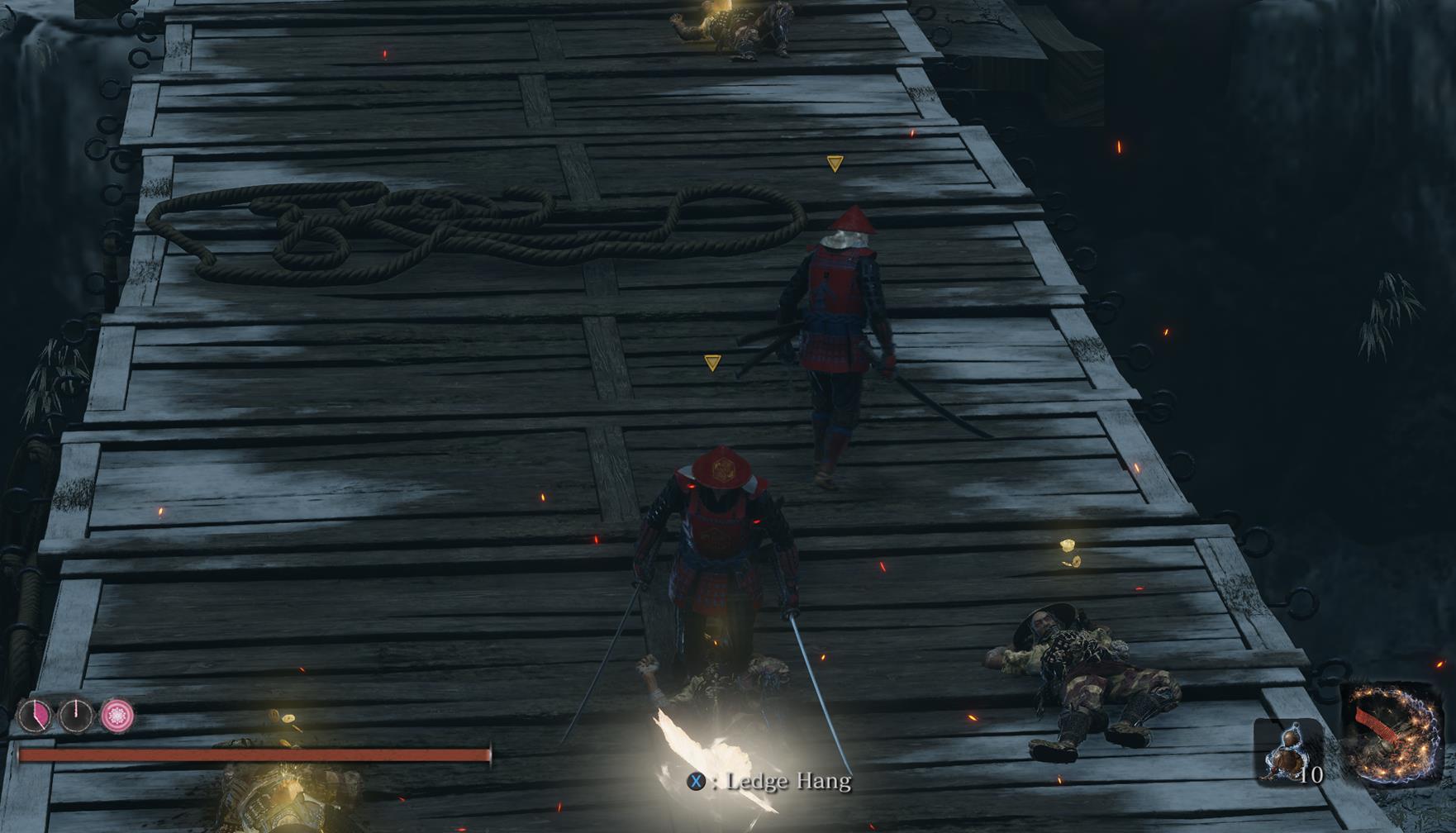 After meeting certain conditions, the story advances into the third phase. Though the change this time is more subtle, FromSoftware yet again uses enemy placements as a way to tell a story. In that phase, the Nightjar have once again reclaimed the rooftops. As you arrive, you’ll see them fighting off the remainder of our purple-striped friends who kicked ‘em off the same rooftops just hours ago.

The situation on the ground sees a few tweaks, too, with an optional boss now occupying an existing area. Once again, you have to reactivate Idols in Ashina’s surrounding areas, and defeat new mini-bosses to boot. All of these shifts were dictated by major story beats, but they registered louder than any cutscene because they changed the way you interact with Sekiro.

My memory of Sekiro’s late-game story twists is forever entwined with that of my struggle with the new enemies it introduced, and the challenge the deactivated Idols created. To me, this feels like an evolution of FromSoftware’s unique style of storytelling. The studio is clearly not interested in learning from film as much as it is confident in growing its own technique, and what a bold evolution this is.