This one's hitting the upper end of saltometer, but a purported cover image suggests Mass Effect 3 on Xbox 360 will support Kinect.

The image turned up on NeoGAF, and is said to have appeared on the EA store before being rapidly pulled.

Adding credence to the rumour is the "better with Kinect" tagline, which suggests enhanced elements - perhaps voice and gesture menu commands or social features - rather than the somewhat ludicrous idea of full Kinect control in a precise action game.

While all my instincts are crying "Photoshop", as RPGSite points out, the basic Shepard art looks genuine, and hasn't been noted elsewhere.

Not that this means the Kinect banner wasn't added onto leaked art, or that it's not a template error - but it's something to think about. Certainly E3 will answer us one way or another.

BioWare has been furiously teasing Mass Effect 3's E3 demo, and lead designer Casey Hudson has commented that is one of the most difficult demos he has ever produced. 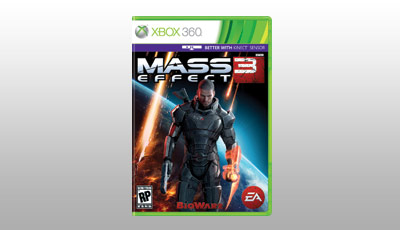