Stace Harman ventures into The Cave and speaks to adventure game veteran Ron Gilbert about the cheery subject of death. 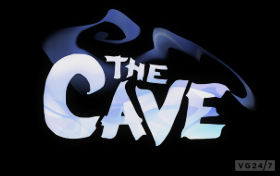 The Cave is the result of over two decades of Ron Gilbert’s cogitation and is being developed in conjunction with Double Fine, and reunites Gilbert with Tim Schafer, one of Monkey Island’s co-creators.

Meet the characters: the hillbilly, scientist monk and twins, along with the adventurer, knight and time-traveller. Both videos feature the same 30-second intro.

Gilbert recently discussed the core design tenets of The Cave and expressed his desire to bring it to touch-based platforms, such as iOS devices.

Perhaps it’s due to the short, dark days that characterise a British winter, but recently I’ve been thinking a lot about death.

Reassuringly, most of this thinking has been in relation to death in video games, rather than my own mortality. I think Telltale’s The Walking Dead started it, because while I enjoyed the game, the death element bothered me greatly.

Not on an existential level, you understand, but in those instances where I was ripped from the narrative and unceremoniously dumped at the game over screen. Those moments jarred because they didn’t fit within the context of the wider, narrative-driven adventure.

You can imagine my relief, then, when I discover that death in Ron Gilbert’s latest platform-adventure game, The Cave, is little more than a feedback mechanism, rather than a form of punishment.

Here, death is akin to a gentle admonishment to indicate that, no, standing in a puddle of water while removing a fuse is not a good idea or yes, loitering near a stick of lit dynamite is going to have dire consequences.

In practical terms, this means that if any member of your three-character-team dies they immediately return to the nearest checkpoint, which is often just a screen away. Then you’re free to try a new solution to the current puzzle (and not all failed attempts result in death) or to wander in another direction to try something elsewhere.

So, the threat of death needn’t be feared but its presence proves just enough of a deterrent to prevent you from thoughtlessly and randomly clicking on everything in view.

Despite this admission, you will die a lot in The Cave. You’ll die through trial and error, you’ll die from falling from too great a height and you’ll die while experimenting with each of the character’s special powers.

Just three of The Cave’s seven-strong cast of offbeat characters can be selected for each play-through, so having completed it once you’ll then die all over again with a different set of characters. Happily, if you have one or two like-minded friends you can bring them along for the ride and they can die too. 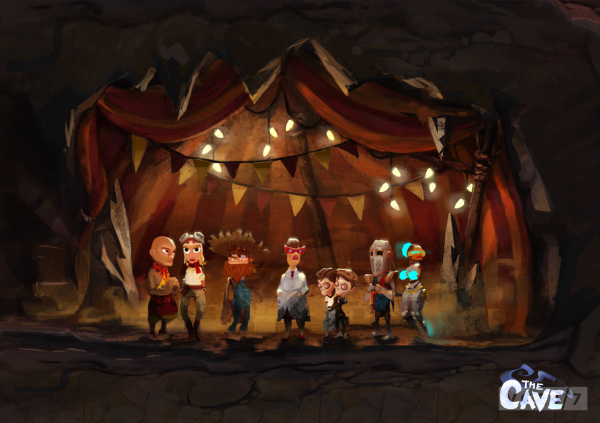 Each character has entered the cave’s subterranean network to search out the thing that they most desire. I know this because the cave itself told me so. Yup, Gilbert’s cave is a sentient, disembodied voice that narrates the whole adventure. Every character has its own unique special power, so while the feckless hillbilly can hold his breath indefinitely, the monk has the power of telekinesis and the scientist can hack electrical devices.

These powers not only facilitate a different approach to the numerous puzzles but also determine which areas can be accessed on any given play-through. In this way, the combination of characters that you choose will determine what areas of the game you will see and how you’ll tackle them, which neatly adds replay value that brings with it new content.

The action is designed to keep everything moving, and so each area has multiple puzzles that can be tackled in any order. If you get stumped by one you can just move to another. Meanwhile, a number of factors keep the individual puzzles streamlined, such as the lack of an inventory system.

Each of your three characters can carry just one item, which they visibly carry in their hands and not, in adventure game tradition, stuffed down their trousers. This eliminates the need to click on every item in a bloated inventory in the hope that it will work with an interactive element of the environment.

Whether you’ll actually get stuck on any of the puzzles for any length of time is another matter. None of the dozen or so puzzles that my co-op partner and I encounter in a brief, 30 minute play-through are particularly taxing. However, executing the solutions and watching their effects (in addition to hearing the narrative exposition of the cave itself) is entertaining in and of itself.

Don’t stand so close to me

Curiously, one area that isn’t quite so much fun, especially with another person in tow, is basic movement. Gilbert has talked previously about the how the light platforming elements are designed to “entice gamers not interested in puzzles”, but some finicky gamepad controls make multiplayer movement something of a chore.

Reinforcing this is the manner in which the camera follows only the most recently selected character. In single-player this is fine, as you switch between characters on your own terms, but additional players frequently make it necessary to re-select your own character in order to have the camera follow them off screen. Hopefully, this is something that just takes some getting used but, nonetheless, it initially feels annoyingly unintuitive.

In this way, The Cave sometimes feels like a single-player game that supports up to three players, rather than being designed as a co-op experience. It’s also going to be interesting to see how movement is dealt with on PC, where Gilbert says he’s trying to develop a mouse-centric control scheme that only uses the keyboard to switch characters.

Launching in January, The Cave looks to be a humorous, narrative-driven adventure game. Peculiarities of its multiplayer control scheme aside, both its logic puzzles and colourful cast should provide an entertaining experience whether playing solo or with friends.

It has an interesting premise, meaningful replay value and an amusing script. Best of all, The Cave invites experimentation by ensuring that death is not the end and that there’s no need for you to fear the reaper.