A player has found yet another case of extraordinary attention to detail in Red Dead Redemption 2, this time to do with how animals behave when you're not looking.

Eagle-eyed Redditor u/PPLovee recently shared a video zooming in on a pair of bucks in the distance. As Arthur looks down the scope of his rifle, you can see the bucks in explicit detail, who have somehow managed to get their antlers into a mad tangle.

"Bucks got tangled while sparring, one is dead," PPLovee wrote. "When this happens in the wild, they will normally starve."

When one commenter asked for extra clarification on how these bucks end up starving, PPLovee was quick to explain the situation:

"Because they can’t eat if they’re stuck together bro" 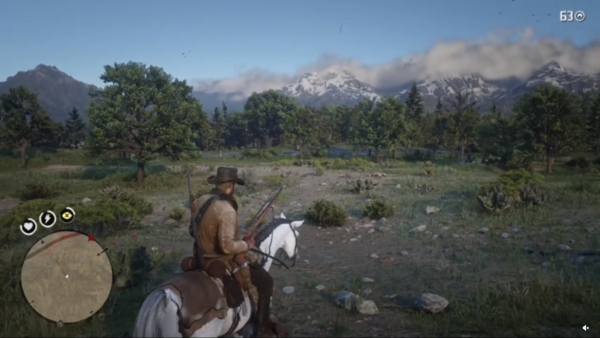 Fortunately, the surviving stag manages to free itself, before galloping off into the distance. This, unfortunately, isn't always the case in the real wild.

This is just one of many incredible details fans are still discovering today, almost two years since Red Dead Redemption 2 originally launched. For example, did you know that Arthur silently counts bullets while he's reloading?

Meanwhile, the sheer amount of freedom Red Dead Redemption 2 affords you is remarkable. You can roam the open plains on horseback to your heart's content, or hijack ordinary trains with an extraordinary degree of vigor. Or you can pet a horse for an entire hour.

You should also definitely check out this amazing new GTA 5 mod that completely revamps its graphics.