Sony recently filed a patent that looks a lot like a cloud-based backwards compatibility system for PS5.

The patent originally appeared on Japan's Platform for Patent Information website, having been officially filed on July 2. Although the drawings associated with it are captioned in Japanese, the patent description has translation support.

"Another trend growing in this industry relates to the development of cloud-based gaming systems," reads said description when translated. "Such a system may include a remote processing server that is configured to execute a game application, receive input from a user and communicate with a local thin client configured to display an image on a display."

One of the drawings - embedded below - "shows a user playing a cloud-based video game according to an embodiment of the present invention."

There are also various other images that appear to point towards cloud-based backwards compatibility. For example, according to the patent description, the picture below "illustrates an accumulation of game titles across various generations of a gaming console in accordance with an embodiment of the present invention. 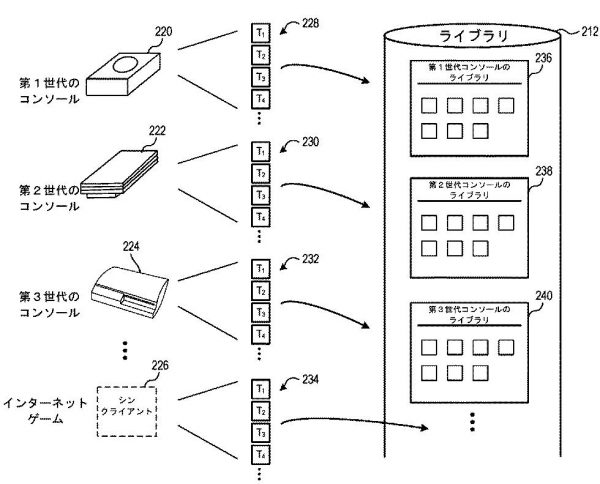 As you can see in the image above, launch models for the PS1, PS2, and PS3 are quite clearly the subject for this section of the patent. According to the description, it appears that Sony is attempting to create virtual consoles within a console - it's not too dissimilar to the concept of an emulator, except in this instance it would be legal and officially supported.

It's worth noting that the obvious absence of a PS4 system in this image likely has to do with the fact that the PS5 will already support the top 100 PS4 games. On top of this, new PS4 titles certified after July are required to be PS5-compatible.

On the other hand, Microsoft has stated that the Xbox Series X will support "all" Xbox One games.

The patent also mentions a new kind of sharing software that seems to allow players to post gameplay clips to the cloud. The word "slices" crops up more than once, and likely refers to trimmed video clips. It also mentions creating "mini-games" from these slices, introducing the potential for the game-sharing function to be quite significant in the PS5 community.

This is especially interesting when you consider another patent Sony recently filed, which featured a device that looks a lot like Xbox Snap.