Thanks to PS5's custom-designed solid state drive, the console will be much faster than its predecessor.

During Sony's most recent corporate strategy meeting this week, the company discussed how the solid state drive (SSD) in PS5 will make the console 100 times faster than PS4.

This will ensure much shorter loading times for a better sense of immersion (thanks, Lad Bible).

"In order to further enhance the sense of immersion in games, we expect to improve not just the resolution, but the speed of games," reads the document.

"For example, through a custom‐designed high‐speed SSD, we plan to realize game data processing speeds that are approximately 100 times faster than PS4.

"Game load times should be much shorter, and players should be able to move through immense game worlds in almost an instant." 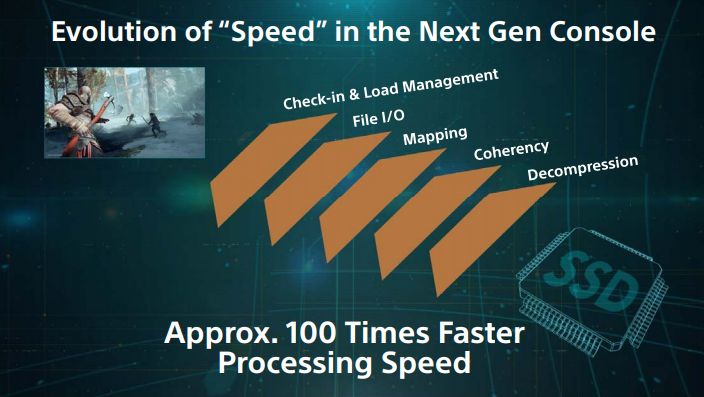 Last week after Epic Games showed its Unreal Engine 5 demo running on a PS5, company CEO Tim Sweeney described the console's storage system as "absolutely world-class," and stated it's even better than one you would find on a high-end PC.

“The world of loading screens is over,” he said. “The days of geometry popping up as you’re going through game environments are ended.”

Catch up on everything we know about the PS5 here, and compare the PS5 versus Microsoft’s Xbox Series X tech specs.