Ever since the announcement that it wouldn't actually allow you to catch 'em all, Pokemon Sword and Shield has been having a bit of a rough time of it online. But, listen: I've finally played a substantial chunk of it, and it's brilliant.

Make no mistake: Pokemon Sword and Shield are clearly the most ambitious games in the Pokemon series. The developer has said it wanted the entire theme of the game to be the quest to become 'the biggest and most powerful', and that's basically reflected in the game's design. That theme will be present in the quest to topple the gyms of the Galar Region and become champion, obviously.

It's also present in the new dynamax feature that takes familiar Pokemon and projects them to be enormous, imposing figures on the battlefield. Ambition essentially runs through the game like a stick of rock - but it's also dedicated to some Pokemon traditions in a way that borders on slavish. The result is a push and a pull, a back and forth, and an intriguing, exciting project.

Take the story, for example. The narrative of Pokemon Sword and Shield isn't afraid to take a break for a proper, more traditional cutscene with dynamic direction. Typically the series has been static cameras and basic text boxes, but now characters gesture around cameras that swap angle and pan, lips flapping as they speak. Then there's the dedication to tradition - the game has no voice work, so text boxes automatically advance to simulate tempo as lips silently and eerily flap while funky music jams out in the background.

It's a cool step forward and a continuation of the early attempts at cinematic flair in Sun and Moon, but I'll admit: it's sometimes a little uncanny and weird. As in one moment it looks a little strange, in another it impresses - the scene that introduces the three new starter Pokemon is brilliant, a wonderfully charming little slapstick sketch of the trio playing and teasing each other that immediately gives you an idea of their personalities and ability sets.

This is the nature of Pokemon Sword and Shield. At times it feels like an enormous step forwards, while other times it is simply a high definition version of what came before. It's important to understand this about Sword and Shield. While you have a far more beautiful, detailed and dynamic world, once you slide into battle it functions and looks much the same - those same static encounters with canned move animations. Cutting Pokemon has apparently helped the team to change and update a lot - but not with things like that. This doesn't make the game unambitious, however - there is a lot going on, and a whole lot to love.

Sword and Shield kick off in true Pokemon tradition, with the player trainer waking up in a sleepy town. This time you're in the Galar region, which is roughly based on the UK. Your friend is set up as your rival character, and he has a connection to the best: his brother is the current reigning Champion, a Pokemon trainer called Leon who has a huge fan following. When he returns to your home town in the early stages of the game, a crowd of people wait to greet him at the station, throwing up a specific hand gesture that represents his iconic Charizard.

This sort of detail is important to a general difference in the land of Galar; it's a region where Pokemon battles are treated more like a sport. You will have seen battles taking place inside stadiums in trailers, with people cheering from the stands. This is one way the game aims to be more dynamic, and in some senses it'll actually more closely resemble the anime, since once players conquer the gyms we're told their final challenge will now take the form of a tournament, just as in the anime.

There are surprises Nintendo and The Pokemon Company want to preserve, so I'm not going to talk about the new Pokemon I saw in my first 90 minutes with the Shield version of the game in too much detail. What I will say is that there's a great sense of Britishness about them. It might be because I am myself British and recognise the elements more clearly, but I'd go so far as to say that this is the most regionally-conscious Pokemon game yet. There are some Pokemon names that are great references to British slang, and several new species that are directly inspired by the sort of wildlife I see scuttling around my local park. It's brilliant. I will say, also, that the number of new Pokemon and Galarian forms I saw in just 90 minutes gives me hope that this game will add quite a few newcomers. 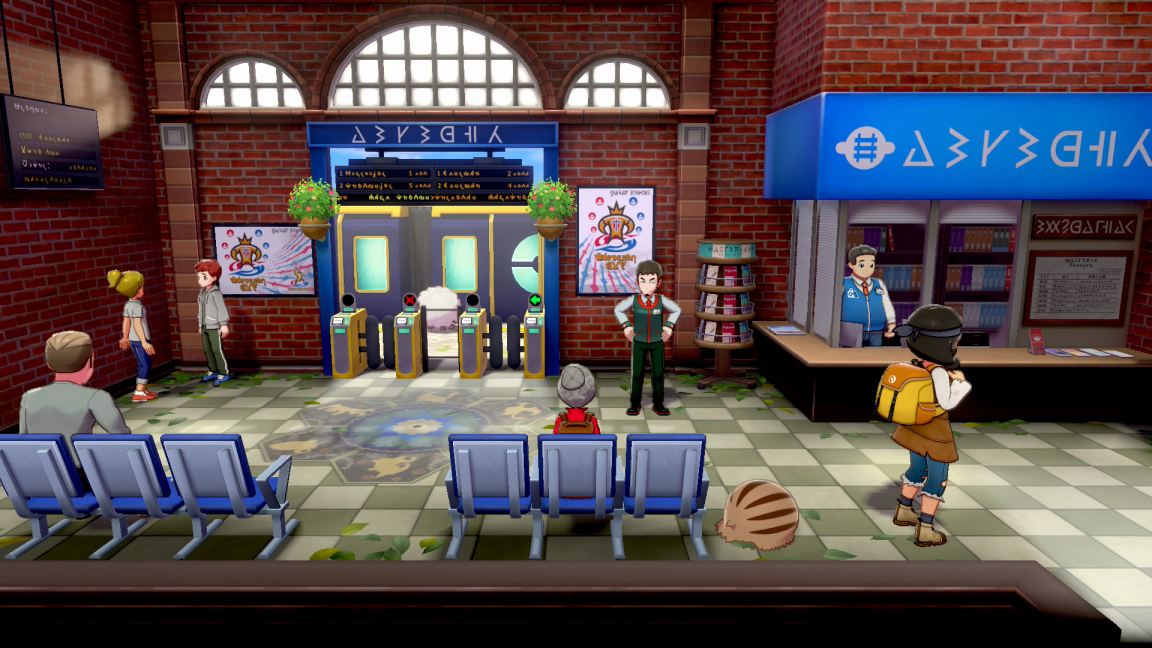 That British streak runs deep. Interact with the Nintendo Switch in your protagonist's bedroom and the description reads "The latest video game console is sitting by the telly." Of course it says telly. Many NPCs casually call you mate. There's a counter in Pokemon Centers that isn't technically serving booze but visually is an accurate recreation of a UK pub. Architecturally, too, it's clear a lot of attention was paid to sleepy English towns. Suddenly the addition of a Pokemon like Wooloo makes more sense in the context of the game, too. We've had Sheep Pokemon before, but this particular breed is the Pokemon version that fits the vision of the English farms that roll by the window of a late-running, stinking, overcrowded commuter train.

This is where the switch to a high definition screen is making the most difference to the world of Pokemon. The world might still mostly have fixed camera angles and a simplistic design for exploration derived from the Game Boy originals, but the extra visual fidelity and horsepower is instead used to give the world intricate detail that truly brings it to life. This is really where Sword and Shield impress the most - it feels like a world you want to spend more time in.

As far as the structure of that first 90 minutes goes, it's exactly what you'd expect. Story waffle gives way to you picking up your absent dad's old backpack, ready for adventure. Then you meet your starter Pokemon, engage in early battles and encounters across a first few routes, all while meeting characters who will clearly be important to the story. What's interesting is that very early on you're shunted over to the 'Wild Area' - a major difference for Sword and Shield.

For the uninitiated, the wild area is how Sword and Shield experiment with a bit of open world style design - an expansive open-ended area full of enemy encounters of all stripes. Powerful Pokemon are present here, and the game advises you to turn tail and run if you get on their bad side. There's also some very challenging trainers. The wild area is an interesting twist in that it seems to trust players a little more than the hand-hold heavy Pokemon titles of recent years. When you're dropped into it, there's a clear objective you can run to in order to continue the story, but equally you can begin wider exploration straight away.

The Wild Area is also where Pokemon appear out in the field, just as they did in Pokemon Let's Go - so you can skirt around and avoid them if necessary. Elsewhere, the game uses a mixture of on-screen creatures and random encounters in tall grass in a way that feels like a very smart combination of the different styles the series now has at its disposal.

This is the strange thing about Pokemon Sword and Shield. I've written in the past in vague support of the 'bring back the national dex' crowd - my argument has always been that if Pokemon need to be cut, the game should feel a bigger step forwards, battles should look more dynamic and exciting. I have to admit that as I began playing Sword and Shield, those worries melted away. Each charming new species I met would help to make me feel a little better about an older one that might be missing, and the level of polish and charm in the world helps to offset the stale-looking battles, even if I still wish they were more dynamic. Finally, I'm properly excited about this new Pokemon adventure.