Nvidia's impressive new 'gaming flagship' is almost as powerful as its top-line multimedia card - but it has a cost to match.

Back in September of last year, I hailed the Nvidia GeForce RTX 3080 as the moment that 4K, ray-traced, 60fps gaming finally hit an affordable price - but for some, there was always a ghost at the feast - the more powerful, hugely expensive 3090.

The 3090 wasn’t really designed for even a top-tier, max-settings PC gamer - it was really in the role previously filled by the Titan cards - great for gaming, but really designed for productivity and creation. My advice was to resist the temptation to over-egg things with the 3090 and plump for the 3080, which was envisioned and functioned as a perfect top-tier gaming GPU.

Fast forward nine months and here we are staring down the barrel of a couple of new Nvidia GPU releases. The most notable of the two is arguably the Nvidia GeForce RTX 3080 Ti - a souped-up version of the card I so heartily recommended last year that teases at the performance levels of the 3090, but in a slightly cheaper (though still eye-wateringly pricey) form. 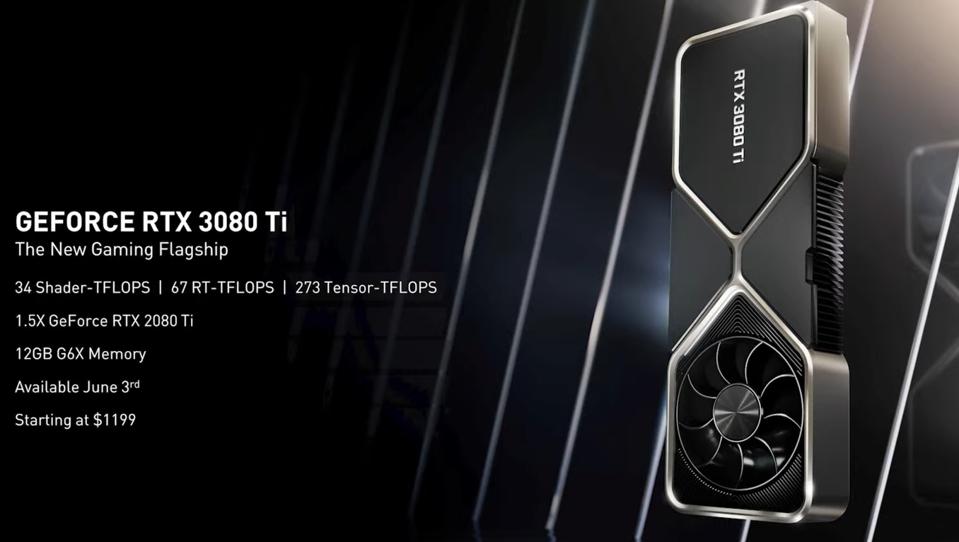 Meet the new line-up. Which is a lot like the old line-up

Nvidia describes the 3080 Ti as its new gaming flagship. Though the 3090 isn’t going anywhere and remains the overall most powerful GPU, some compromises are made in the 3080 Ti to make it moderately less powerful, and cheaper, while maintaining similar gaming performance.

Basically, it inserts a middle step between the most powerful card and its initial flagship gaming offering - offering a slightly cheaper way for hardcore players to satisfy their absolute need to have the best available for games. Here’s how the top level of Nvidia graphics cards now shakes out:

These prices are of course based on the suggested retail price of each card - though we all know the graphics card market is a disaster right now, with the 3080 often selling for double its normal retail price. Scumbag scalpers are making bank while gamers struggle to get the gear they want. It sucks - and releasing new cards into the wild doesn’t necessarily help ease that pain.

Nvidia continues to do small things to combat this, however. Like other recent releases, the 3080 Ti features the ‘Lite Hash Rate’ GPU core that limits the card’s usefulness for mining cryptocurrency. If you want to mine, Nvidia has dedicated cards for that. This measure should hopefully help to reduce the stock problems gaming cards have faced at least partially. The situation remains a nightmare, however. Let’s acknowledge that, understand that it’s bullshit, and put it aside for now, judging the cards on the value as presented at retail price, if you can actually find one.

The biggest difference between the high-end cards comes in their available memory. The 3080 offers 12gb, which is a modest 2gb upgrade on the 3080 but still only half of what the 3090 boasts. The point was always that 12gb should be enough for most 4K gaming experiences available today, though. That memory helps if you’re rendering or something, but drives the cost up when it isn’t needed to max out most games. As such, that’s where the $300 cost saving comes from.

Notably, and pleasingly, the power draw and card size is in line with the 3080 to the point where the two cards are practically indistinguishable side-by-side, if not for those two letters. That means it’s not as gargantuan as the GPU bracket warping 3090, but also that the same slick air flow design is present on Nvidia’s Founders Edition version - which is most welcome. Less welcome is the 12-pin power adapter that also transfers over from the other cards in the series - necessitating either a specialist cable or an ugly adapter.

Obviously the main thing that matters here is the numbers in-game - and when it comes to that, the 3080 Ti offers impressive results in a card that has the same form factor as the 3080. While it’s a decent clip cheaper than the 3090, the 3080 Ti is still a good chunk of the way towards being double the price of the original 3080 - which rather takes the edge off that card’s value proposition, which was one of my favourite things about it. So just how good is the upgrade? 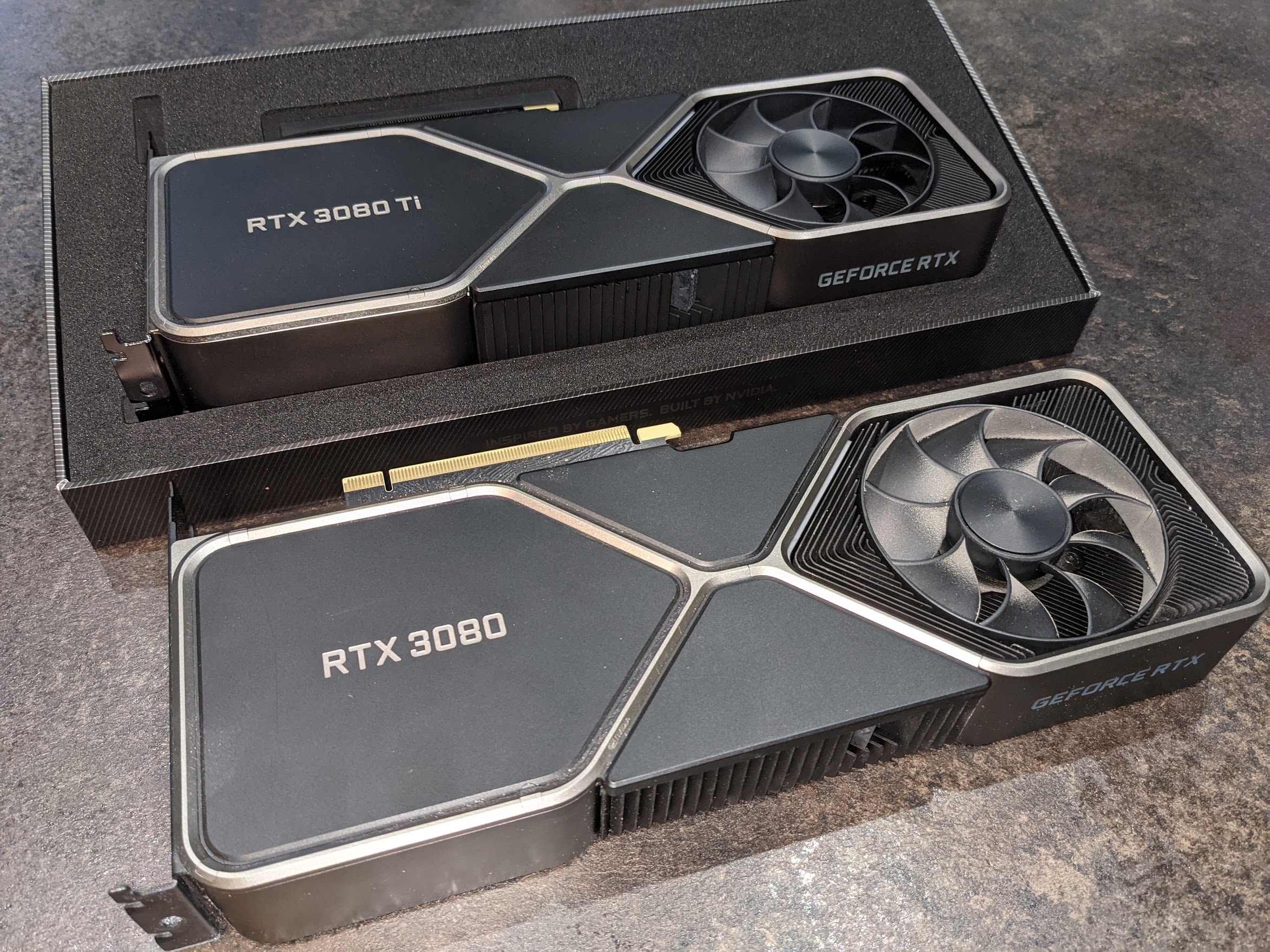 Generally speaking, the gains are strong, if not earth-shattering. The strength of the gains depends on your target. If your goal is to get as close to the 3090 as possible while paying less money, the 3080 Ti is a slam dunk. Likewise if you have a previous-generation card that needs replacing; this is a great option. If you want an upgrade over the vanilla 3080, or are weighing up the difference in price and performance between it and the Ti, the difference is more modest.

While it’s imminently about to be usurped by a sequel, Battlefield 5 has been a testing favourite for us with the 20 and 30 series RTX cards. It ticks all the boxes, with ray tracing, DLSS, and taxing visuals. Battlefield 5 was up around 50% on the previous generation with the vanilla 3080 - and there’s a modest uplift of around 5% on top of that in the 3080 Ti, be that at 1440p or full 4K.

That’s actually at the lower end of the improvements - at the other end are the likes of Far Cry 5, which hops from around 96fps up to something more like 109fps, a gain of a little over 13%. Shadow of the Tomb Raider is another staple in our testing, though it’s a game that does particularly well on Nvidia cards. An 11% gain boosts its frame rate from the high eighties on the vanilla 2080 up to just shy of 100fps on the 3080 Ti.

You can probably see a pattern emerging here, and it’s onr borne out in the other games we’ve tested; you can expect a frame rate boon of between 5% and 13% on average - but it all depends on the game, engine, and chosen settings. It’s fair to say that while the 3080 Ti will absolutely crush games if you decide to toss a 1440p presentation at it, to do so would be overkill and pretty wasteful money-wise -- this is a card built for 4K.

This begs the question: how much are such gains worth to you? If we imagine a magical fairytale land where graphics cards are again available for their MSRP - or if we assume the 3080 Ti will see comparative price inflation to its siblings, the 3080 Ti is around 70% cheaper than the regular 3080. Is that extra cost worth it for that performance increase? In your heart, you probably already know the answer. If you don't even need 4K, at that point the even cheaper 3070 also becomes a contender - with the 3070 Ti's launch also imminent.

Features like DLSS, Reflex, and Nvidia Broadcast are of course key to the RTX offering Nvidia is showcasing across this entire range of GPUs. In fact, if we assume that AMD and Nvidia are able to reach relative parity in pure graphical power stakes, it is Nvidia’s suite of additional technology that currently keeps it in its market leader position. It’ll be interesting to see AMD’s DLSS rival in particular for this very reason.

With that said, these features don’t hugely bear talking about again about this specific card, the 3080 Ti. Chances are if you’re reading this article on the hunt for impressions about this hot new GPU, you already know and understand the logic behind ray tracing, the convenience of Broadcast’s noise cancelling and background blurring, and the importance of DLSS in delivering ray traced scenes without tanking the frame rate. If not, you can read about them in our reviews of cards like the 3080 and 3070.

All of these features are vital, but they’re also a part of every single RTX GeForce GPU. Right now, if you want access to these things, you’ve already chosen Nvidia; the only question beyond that is of which card. From here on in, it’s all about the power - and your budget. 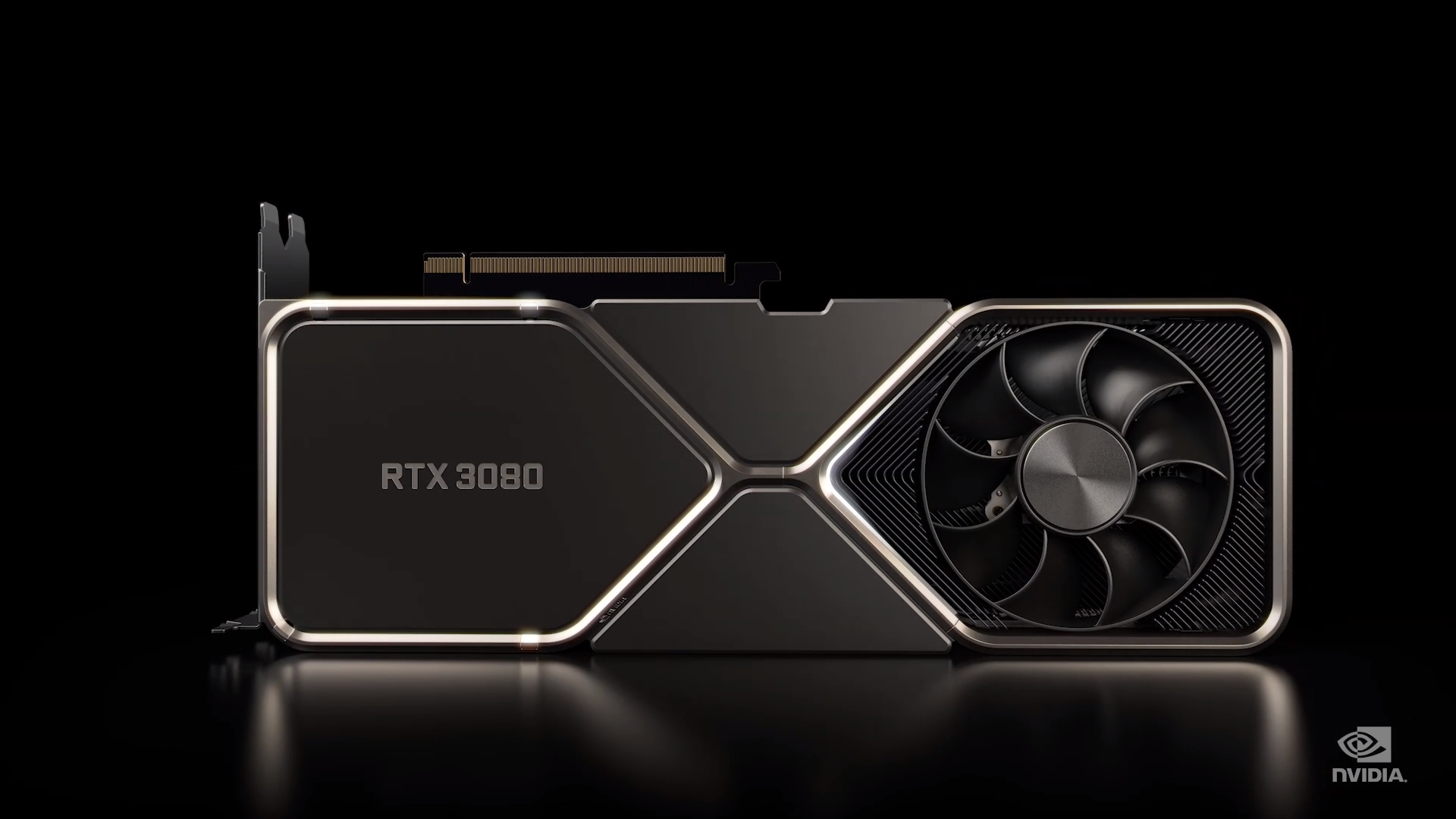 A question of cost

Do you want ray traced, 4K gaming at the highest possible level? Are you willing to drop more than a grand on a graphics card? If the answer is yes, then the 3090 or the 3080 Ti are your primary options. With RT on in particular you’ll still need a little push from DLSS to get the absolute best performance, but these cards are the high watermark.

Some people will inevitably make a big deal of the significant RAM difference between the 3080 Ti and the 3090 - but that’s why this is the 3080 Ti and not some sort of ‘Lite’ 3090. The 3090 will remain the king for creators - but for gaming, the 3080 Ti is the new optimum sweet-spot - powerful, but not too expensive. I had expected a Ti variant to arrive eventually, but I'd never anticipated that its performance would close in so close on the 3090. As an upgrade to the 3080 the Ti is absolute, unassailable, and incredibly impressive - but it also should be, given the price.

The greatest string to the vanilla 3080’s bow was its price. In terms of price-to-performance, it was and remains just an astoundingly good value GPU, and an incredibly well-engineered piece of technology. Its Ti sibling is no less impressive in its engineering, but it does inherently feel a little bit less of a value for money. In many ways, its slightly weaker sibling’s strong price point shames it, even if the RRP lines up fairly with the last-generation 20-series cards.

Certainly, for those playing in resolutions below 4K, anything beyond the 3080 is absolutely overkill. In fact, the 3070 would arguably suffice. For acceptable 4K performance, the 3080 remains the absolute sweet spot of value and power - if you’re lucky enough to scoop one at the RRP.

For a certain subset of gamers who avoided the 3080 because of the looming shadow of the 3090, however, this is at last a gaming-focused card that can go toe-to-toe with that powerhouse - albeit on its own terms. The RAM ding doesn’t matter; this is the new top gaming card that’s explicitly marketed as-such.

Those who didn’t feel comfortable going for the 3080 when the 3090 existed now have a tidy middle-ground option, and they certainly won’t be disappointed in the performance - if there’s any stock to be found, anyway.