Nvidia's latest flagship graphics card wants to future-proof your PC for all next-gen games - and it just might do it.

Back when the Nvidia RTX 2080 ti first released, I described it as the future - but arguably too expensive for mass adoption. Almost exactly two years later, Nvidia is back with a proposition: what if the future was even better, and even cheaper? Say hello to the GeForce RTX 3080, the latest flagship gaming GPU from the graphics powerhouse.

I describe the 3080 as the flagship, and I already know some of you will be wondering about its bigger brother, the 3090. And it's true - that is the top-tier 30 series card from Nvidia. It's important to define the hierarchy here, though: the 3090 is more like a 'Titan' card, the hyper-expensive high-ends cards not really aimed at the average or even above-average PC gaming consumer. If you're going to be doing heavy production work or playing in 8K you might want a 3090, but for 4K gaming, the 3080 is king. 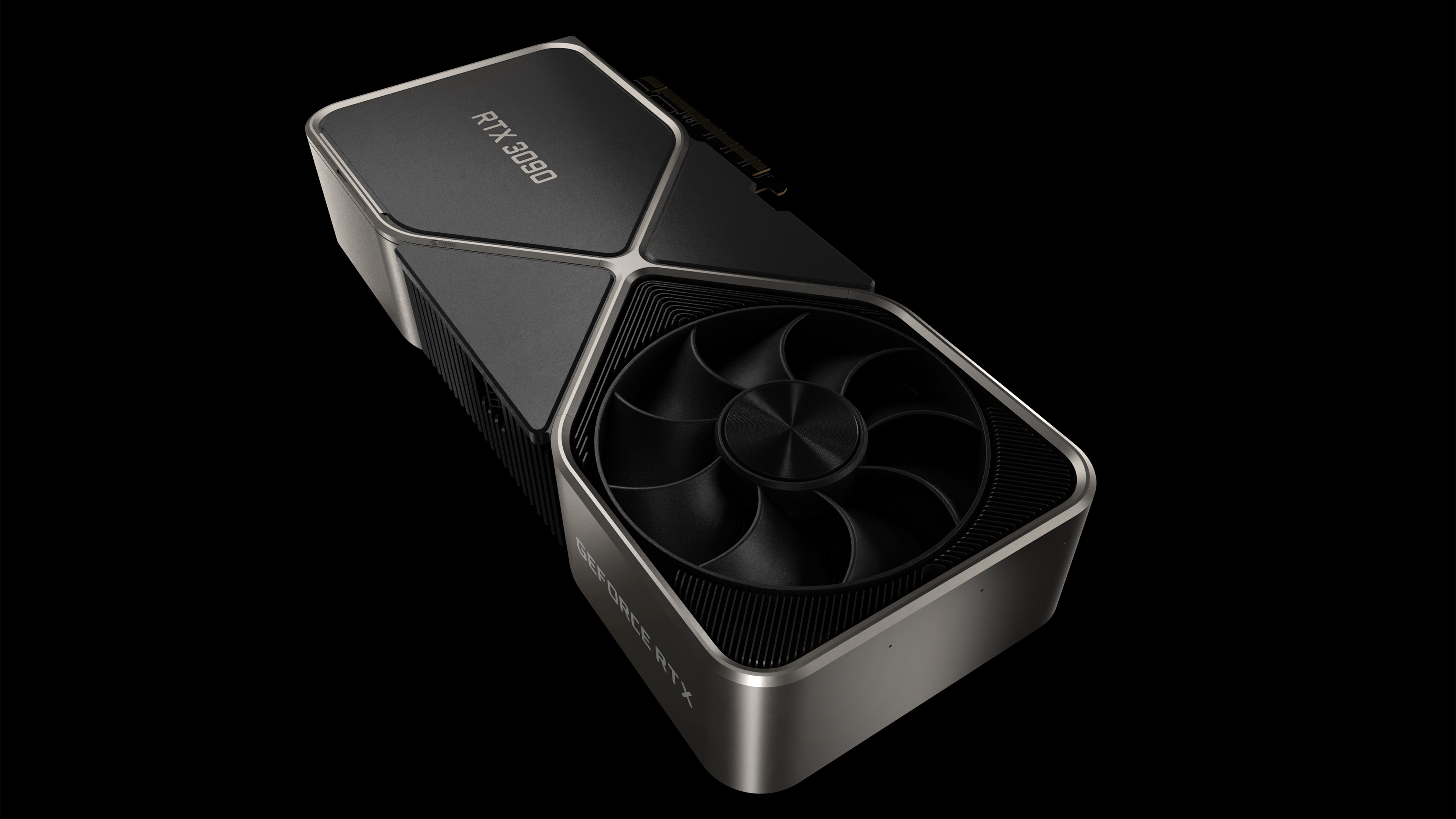 I've been toying with an RTX 3080 for over a week now, and the overall take-away that you need to know about from many hours of benchmarking and testing across a variety of games is the incredible price to performance value this new card offers. The 3080 starts at $699/£649, but it has performance that consistently and casually outperforms the RTX 2080 Ti, a card that launched at $1200 just under two years ago. Nvidia has been gleefully boasting this, too, releasing videos of things like Doom Eternal running at 4K and more than 120 frames per second on the 3080.

Our tests were conducted on one machine with an Intel i7-10700K CPU mildly overclocked to 4.2 GHz, 64GB of RAM and a Gigabyte AORUS Z490 motherboard. Only the GPU itself was changed between tests.

Some games match these numbers more exactly; Battlefield 5 and Borderlands 3 offered similar performance boosts of up to 50% at 4K and maxed-out settings. Others were less profound, but still impressive: the fairly iffy PC version of Horizon Zero Dawn had an absolute maximum frame rate of around 45fps on the last-generation 2080 Super with the average FPS hovering around the 30-35 mark, but the 3080 can get a solid 60fps easily, with a max frame rate quite a bit above that.

Assassin's Creed Odyssey was a similar story; a 2080 Super would manage around 50fps, falling short of that smooth 60 target, but a decent bump with the 3080 means it can now be played at 4K, ultra settings and at 60fps. More examples? How about Shadow of the Tomb Raider - the 2080 Super would manage frame rates in the mid-fifites, while the 2080ti could just about get that game to 60fps at 4K with DLSS enabled. On the 3080? Well, how about over 80fps?

While the exact results of course vary from game to game, with some offering insane performance boons and others reaching a more modest 20% or so increase. Regardless, my main point is that the struggle for 4K and 60 frames per second is generally obliterated in the face of this card. PC gamers who like 1440p ultrawide setups can probably assume they'll be good to comfortably play new-gen console games in ultrawide for years to come with this level of power, while those comfortable at regular 1440p in search of mega-high frame rates will see a rise of around 25% to 30% - which for many current games you might at this stage likely need to be as concerned about a potential CPU bottleneck.

Aside from Battlefield 5, these games aren't on Nvidia's 'suggested' list of titles to test the GPU with - meaning they haven't really been strictly optimized for this new card. But it hits the ground running and crushes them. Even in cases where the games don't get quite as impressive gains, there's still a decent boost. Final Fantasy 15 has a solid framerate increase, while famously CPU-bound Monster Hunter World can do the same sort 60-plus framerate on a 3080 with the fps-boosting DLSS mode turned off as the 2080 Ti can manage with DLSS turned on. And yes, though much of that game is related to non-GPU elements, I saw a solid uplift in Microsoft Flight Simulator 2020, which many have joked is 'the new Crysis' for PC benchmarking. With 4K and on the game's Ultra settings it was bumped up from sub-30fps up to over 40 fps.

Nvidia also claims double the performance from this card's second-generation ray tracing cores, meaning games see less of a performance hit when making use of the new lighting technique that's going to be a defining feature of the next console generation. This, too, has been borne out in tests with Battlefield 5, Control and the stunning Minecraft RTX. Minecraft was a game where you'd be lucky to scrape 60fps even on a 2080 Ti - but with a 3080, it's a breeze. One's mind immediately jumps forward a couple of months to when we begin to get more cross-generation games that make full use of ray tracing: Watch Dogs Legion, Black Ops Cold War and Cyberpunk 2077 will all support Nvidia's ray tracing implementation at launch, and the 3080 will now offer the price-to-performance sweet spot for these games.

While the performance is the most important thing, and certainly our focus here, it's also key to talk about the card. I've been testing the 3080 Founders Edition - the official card from Nvidia. On the Founders card the new 12-pin power socket is placed slap bang in the middle of the card, and when combined with the necessary adapter to make it fit, it looks a little ugly. You'll hopefully soon be able to remedy this with a custom 12-pin cable for your PSU - though that will be an optional extra purchase. Some features of the founders edition will carry through no matter which vendor you buy a 3080 from, but many other vendors have their own, more traditional 2x8-pin power connectors.

Aside from the misjudged-feeling placement of the power socket, however, this Founders Edition card is the best looking one Nvidia has ever made. It feels like a triumph of technical engineering - solid in the hands, lovely to look at (gone is the overbearing bright green LED lighting, replaced by a more subtle white glow!) and sports a curious new cooler design. It basically has dual fans - one on the bottom left of the card, which pulls air in, and one on the top right which expels it.

In theory this is supposed to pull cool air across the radiator and board then expel it upwards. I've had good thermal results with it - moderately better than the comparable last-generation cards - but I have a feeling that your mileage here will vary significantly based on the layout of your case. In my case the hot air is expelled right at the CPU cooler, which feels less than ideal, but I also have a raised case and three high-end Noctua intake fans on the base of the machine pushing cool air up towards the GPU intake. The cooling method here will be stress tested by more learned hardware experts than I, as will liquid cooling options with this interesting design - so I'll leave that to them. 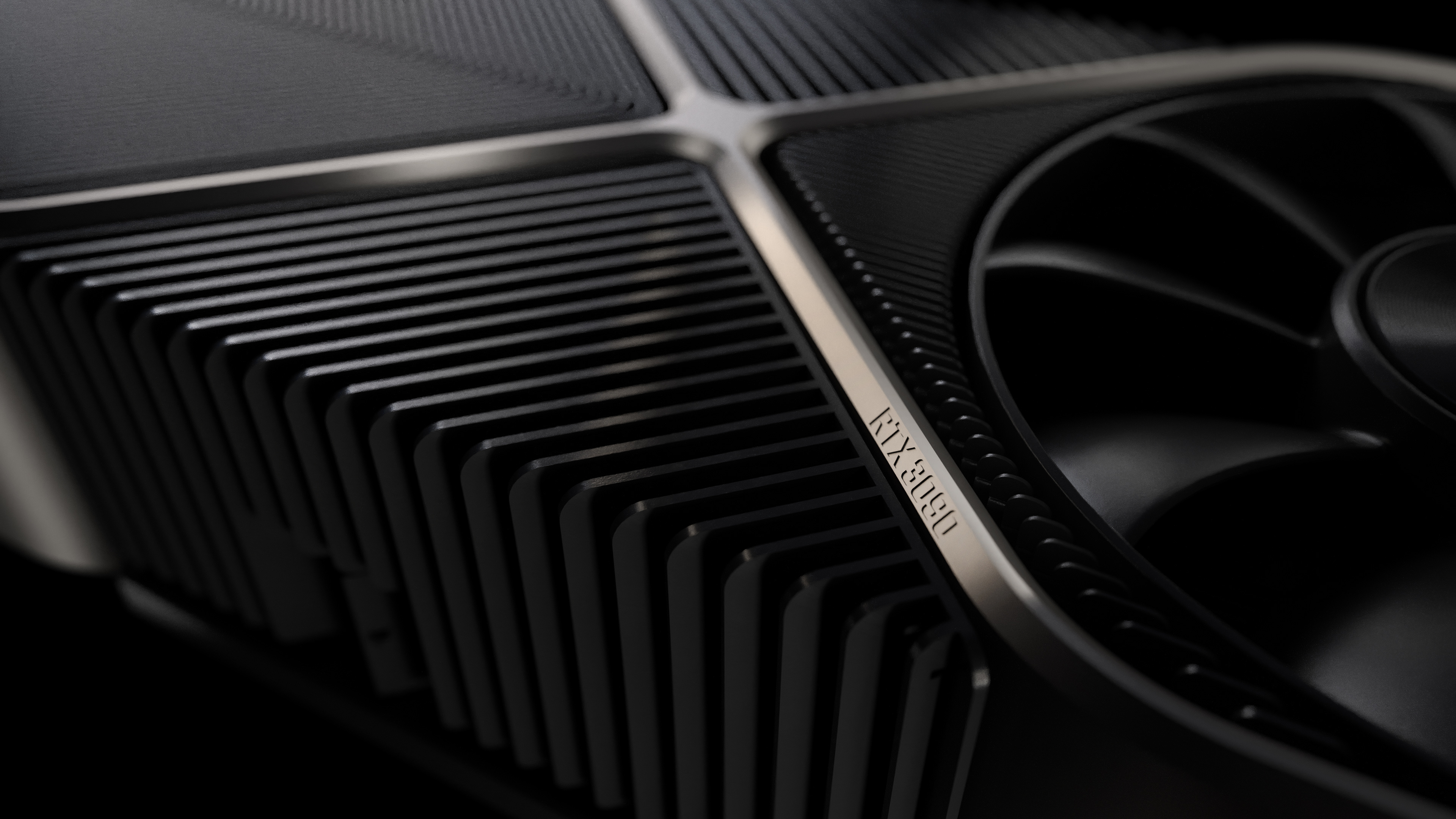 The RTX 3080 loses the VR-focused USB-C port that was present on the previous generation of cards, but has the usual trio of DisplayPort offerings plus a HDMI 2.1 - which in theory means 4K 120fps output to certain TVs, and even the possibility of 8K at up to 60fps. With that noted, Nvidia has made clear this isn't the card that really breaks you into 8K for gaming - that is reserved for the 3090, which can more readily offer double the resolution, but also at double the price. Plus, who in their right mind is spending the asking price on an 8K gaming display right now anyway?

At 4K and lower resolutions however, this is nothing short of an astonishing piece of kit. To play a lot of the popular ray tracing supported games up until now - Battlefield 5, Control, Wolfenstein Youngblood, Metro Exodus and so on, you'd be relying on the DLSS feature to basically hide the reduced resolution and give you a 60fps, 4K presentation. DLSS is also a remarkable piece of technology, and its importance is not diminished here on the 3080 - it goes hand-on-hand with ray tracing after all - but the point is that this card is so powerful that you can flick it off and quite often still get solid performance, if not excellent. Turned on, you can now easily either boost your frame rates even higher or get an increased image quality over the previous generation of cards.

Even Marvel's Avengers, a game that seems to need a fair bit of additional optimisation on PC, sees significant increases. On a 2080 Ti the game would struggle to hit 40fps on Ultra settings, but with the 3080 it makes the 60fps target, albeit with occasional drops into the mid fifties. Conquering even a poorly-optimized game speaks to the nature of this card as a truly next-generation piece of kit.

And that's the point, really, right? As we get next generation console hardware, the question is how PC players can invest in the technology to future-proof themselves for an entire generation's worth of games. While you could spend double on the truly bulletproof card of the future - the 3090 - the 3080 is surely the thinking person's option. We'll see exactly how good console performance is in the coming months, but I'd be surprised if the PS5 and Xbox Series X versions of games can touch the PC versions when this card is thrown at them.

The sweetener remains that price, of course. While it isn't a 'Titan' card, in terms of the generational leap, the GeForce RTX 3080 feels as though it offers as large a jump as the 'Ti' cards from previous generations, all of which were significantly more expensive. It's a difference over even the 2080ti that even somebody less attuned to sensing the a difference in frame rate or resolution should be able to easily feel. PC gaming is always a pricey proposition, and this GPU is still going to set you back more than a next-gen console, but in the context of PC gaming, the bang for buck here is tremendous - and you'll definitely be able to use it for years to come.