Catherine Cai headed into the Neverwinter beta with her D&D helmet firmly strapped on. She returns with mixed reports.

I'll admit, when I first heard that Cryptic Studios and Perfect World were working on a MMORPG based on the Forgotten Realms campaign, I was nervous. Adapting a tabletop RPG to a video game meant reifying fantasies, which seems almost like an oxymoron. It's akin to movie adaptations of books, and many a beloved book series of mine have been destroyed in the writer's rooms of Hollywood.

I almost feel sorry for Cryptic and Perfect World. Some Dungeons & Dragons fans are absolutely unforgiving. Any misstep with the lore or the delivery of Neverwinter is sure to send them into long, angry forum rant-type rages.

Thankfully, it appears Cryptic is handling Neverwinter with grace. I had a chance to preview the MMORPG during its first close beta event recently. 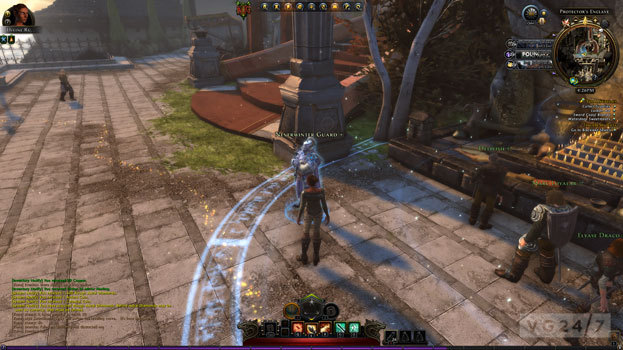 Neverwinter's status as a free-to-play MMO made me wince a little. I'm prejudiced, like most gamers, about the model - I instantly associate it with pay-to-win awfulness. Happily, Cryptic, like most developers who've figured out that pay-to-win does not a good financial model make, has opted to banish most of the paying elements of the game to vanity items. However, paying into one of the Founder's Packs grants large packs of Astral Diamonds, an in-game currency that can be purchased with real money or can be earned through grinding. Since it was only closed beta the presence of Astral Diamonds weren't obvious, so I'm not sure how much of an impact they'll have in the final release.

The character creation process for Neverwinter is fairly standard for an MMO. Race selection is currently limited to human, elf, half-elf, dwarf, tiefling, and halfling, though Cryptic's teased another race for the future. Class selection is disappointing, as only the trickster rogue, divine cleric, and great weapon fighter are available for play. The devs have said that five classes will be available at launch, which, along with the three aforementioned, include the guardian fighter and control wizard.

What's immediately clear upon launching into the game is that Neverwinter is a beautiful game. The world is lovingly detailed, a pleasant surprise since most MMOs are just ugly. The art style opts not for realism, but for a cartoonish look that's classic fantasy. Though the art direction for the game is appropriate for a fantasy RPG, it also feels a little too safe, making the experience quite bland.

Neverwinter's gameplay is rather fast-paced and action-oriented, making combat a somewhat less painful of a process than most MMOs. It's pretty obvious that Cryptic's goal is to make the game easily accessible, as skills are pre-determined and locked out until you reach a certain level. Five active skills can be mapped to the QWER keys and the right mouse button, so the flexibility of combat comes less from being able to choose skills a la carte and more from auspicious combinations of these five mapped skills. Though the game is far from the deep experience I expected it to be, the combat makes the game fun and for the first time, I stepped out of the drab tank role and popped my divine cleric cherry. 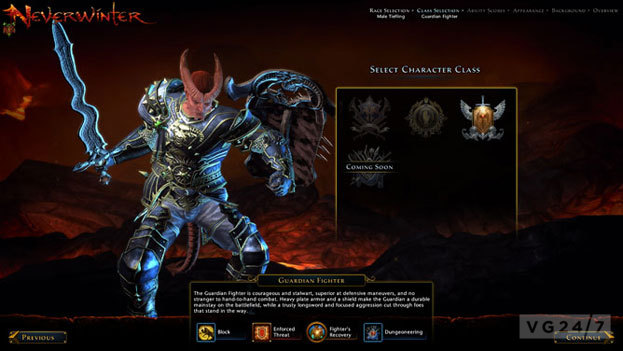 As is generally the case with ambitious MMOs, Neverwinter has its shares of "run here, kill X number of Y things" fetch quests. Even the bigger quest lines sometimes feel like I'm churning the grindstone, as they usually end with something along the lines of "run here and kill bigger Y (hint it's the boss) here."

During my play through, I spotted a good share of bugs. To be fair, the game is still in its closed beta stage and my complaints are rather easy fixes. For instance, ALT-TABbing apparently makes the game unstable, and I ran into quite a few crashes. Switching out of combat mode for other interactions is rather clumsy, so attempting to pick up dropped loot after a battle requires a five second waiting period. I also noticed some missing icons for Great War Fighter-specific items I picked up, unless Great War Fighters only don bright red squares for armor.

Leveling, which was capped to level 30 for the beta event, is also problematic. You can expect to hit level four within the first two minutes of the game, after the introductory boss fight. Hitting level ten happens within the next half hour. Though leveling slows down significantly after that, I've heard rumblings of players hitting the level 30 cap in thirteen hours. No doubt, the quick leveling was meant to retain player interest and prevent grinding, but burning through levels so quickly in a MMO should be an alarming prospect for the developer. It's rather difficult to retain players once they've charged through content, especially when they haven't paid for a subscription.

Though Neverwinter is a solid MMO, my chief complaint is that it doesn't break the mold. At a time when MMOs are almost dime a dozen, it's difficult to stand out without doing something different. And to me, Neverwinter feels like a game made up of safe choices. So yes, while it is a perfectly good and fun MMO, its lack of originality is what keeps it back from being truly great. Given Cryptic would stand absolutely no chance of putting together a game that would please all D&D players, I'd hoped it would take a few risks on Neverwinter. It doesn't feel as though it ever does, and that's disappointing.

For now, I'm eagerly eyeing The Foundry, Neverwinter's center of community-driven content, and hoping that it really will allow players to experience a true video game form of the tabletop game as promised.