Need For Speed: Most Wanted is better with Kinect, according to a pre-order advert posted over at NeoGAF, along with several pre-order bonuses. Check out the image after the break.

The advert below shows a trio of box art for the PS3, PC and Xbox 360 versions of Need for Speed: Most Wanted. The Xbox 360 version sports the purple band across the top for Kinect support.

Developer Criterion has yet to reveal what Need For Speed: Most Wanted's Kinect compatibility will involve, but with Gamescom around the corner we could find out very soon.

Other pre-order bonuses include double XP, bonus cars and more. Check out the incentives below. 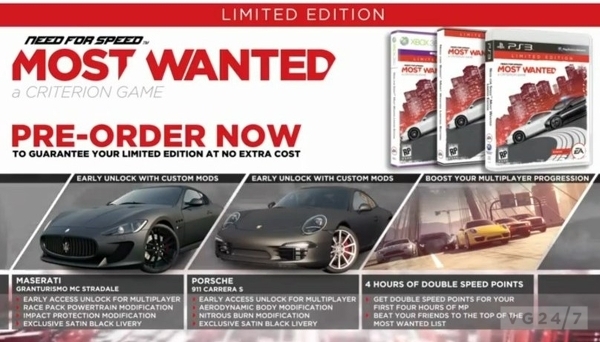 Need for Speed: Most Wanted is out in Europe November 2nd, and America 30th October.