With Final Fantasy XIII-2 arriving in the west early next year, Johnny Cullen talks to producer Yoshinori Kitase on how Square picked up the pace and the lessons learnt from FFXIII.

Sequel to Final Fantasy XIII, which launched in March 2010 as the first core entry in the long-running franchise to grace HD consoles.

While Lighting is playable in some sections throughout the game, main leads this time will be her sister Serah and new character Noel.

Final Fantasy XIII released in March 2010 to strong criticism, particularly of its linearity and lack of the town hubs found in other series titles. At first, Square Enix creatives defended the design decisions. Director Motomu Toriyama said that town hubs were "impossible to do on an HD console – it was too much work." Toriyama said in an E3 interview this year that development on towns similar to those in FFVII-IX were "boring."

But you've got to hand it to producer Yoshinori Kitase. He, along with Toriyama and the rest of the development team, are listening to the fans. Final Fantasy XIII-2 has apparently not only fixed faults in the vanilla version, but have taken feedback into direct consideration, something he says will heighten the enjoyment the player will get from the sequel.

"The overall theme for the development of FFXIII-2 was to address all of the points that were criticised in FFXIII and the most complained about aspect was the linear story progression," Kitase tells VG247.

"The original idea for FFXIII was to make it very much a story-driven experience with the game itself progressing through the narrative, and this led to a linear design. For FFXIII-2 we changed to a player-driven concept where the story progresses through the player making different choices and exploring different situations.

"We believe that these alterations have greatly deepened and enhanced the enjoyment to be had from the gameplay."

But feedback from fans wasn't just enough. This time, "user testing" was key to design development.

"There were many things that we learned and took on board from the development of FFXIII, and we tried out a completely new development process for FFXIII-2. Among the things we felt we could improve upon, one of the most important was user testing. With FFXIII-2 we made sure to include this in the design process from the very start.

"By continuously acquiring objective feedback on the game from the user’s perspective we were able to perfect the gameplay and increase the overall quality of the finished title."

Final Fantasy XIII put players in control of ex-soldier Lightning, as well as Snow, Vanille and others. For XIII-2, while Lightning still remains crucial to the story, Square has switched it up. Serah, Lightning's sister and the fiancee of Snow, is now head honcho, having been a pivotal plot point in the last game. Lightning and Snow - plus Sazh, Vanille, Fang and Hope - attempted to save the worlds of Cocoon and Pulse, along with the crystallised Serah, as part of their "Focus" after unintentionally becoming l'Cie.

"There were many things that we learned and took on board from the development of FFXIII and we tried out a completely new development process for FFXIII-2. Among the things we felt we could improve upon, one of the most important was user testing. With FFXIII-2 we made sure to include this in the design process from the very start."

XIII-2 kicks off right after the events of XIII. Cocoon and Pulse were saved by the actions of Vanille and Fang and all is right in the world - but Lightning, having been just reunited with her sister, is somehow spirited away from her time to Valhalla, where the game's first action set-piece takes place.

With her disappearance, everyone has assumed her dead - except her sister. A year on from Lightning's vanishing act, after an attack on her home town by monsters, Serah comes across a young boy called Noel who claims he can bring her to his sister by travelling through space and time.

This is achieved by a new gameplay system known as the Historia Crux. Using it will unlock multiple endings, according to Kitase, as well as allow a return to areas previously visited in the game.

"The player will be able to carry out time travel by freely selecting the location and era he wishes to travel to next from the Historia Crux. Through this the story will branch at many points, ultimately making it possible to search out multiple endings," he says.

"On top of this basic system it is also possible to rewind time within a single area, allowing you, for example, to go back to previously explored areas and defeat bosses that you could not handle before without having to complete the game and go for a second play through."

Fear not: if you want to go straight through everything related to the story, you can.

"For those players not interested in getting into the side quests and exploring all the deeper possibilities, you also have the option of simply following the main story like in the original FFXIII," adds Kitase.

As mentioned, Serah and Noel are now in the driver's seat for XIII-2, although Lightning will make occasional playable appearances. But it's worth bearing in mind that, compared to past Final Fantasy titles, the pair are very young leads. Perhaps too young? Kitase disagrees.

"In the original FFXIII we aimed to have a selection of main characters with a broad range of ages, but when we decided on having Serah as a main character in the sequel we thought we would need a male character of a similar age as a counterpoint. This was why we created Noel and made him not too far removed from Serah in terms of age.

"However, the world which Noel and his kind inhabit is a far tougher and more dangerous environment than our modern day world, so he is also a protagonist experienced beyond his years, which adds to his appeal."

While Serah and Noel are the main leads, it seems that Lightning is still being pushed very hard in regards to marketing to the point it may overshadow the young pair. But Kitase says her role is still as significant as ever.

"In FFXIII-2 Lightning is still a very important figurehead character for the series," he says. "It is Serah and Noel who players will actually be controlling for most of the time during the game, but throughout the whole adventure they will still be able to feel the presence of Lightning; she watches over their time travelling journey, so fans of the original need not worry that she has been left out."

While the original was criticised for being too linear, towards the end of the game players encountered the open world of Gran Pulse. While the popular location makes a return for the sequel, the Historia Crux system will help expand upon its free-form play features, as well as those of other parts of the game's world.

"We have structured FFXIII-2 so that each area accessible from the Historia Crux will take around 1-2 hours of gameplay to get through. The Archlyte Steppe in Gran Pulse is, of course, still a very expansive location but has been given a new level design where the player can control the weather to reach many different interlocking sections of the whole area," says Kitase. 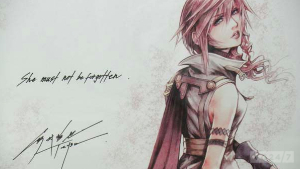 This Lightning drawing, signed by
Tetsuya Nomura, kick-started the
XIII-2 speculation train before the announce.
It reads: "She must not be forgotten."

"The Historia Crux itself increases player freedom in a very different manner to the traditional idea of a 'horizontally' open free roaming world, by also letting you come and go 'vertically' between the same levels in multiple time periods. In this way, we have aimed to allow for freedom in multiple directions and in four dimensions."

Another new addition to FFXIII-2 is QTEs. XIII-2 uses them in some of the biggest action set-pieces, such as boss fights and events outside them. While many bemoan the use of QTEs at all, Kitase, when explaining their usefulness, argues its all about immersion.

"The whole game has been designed to allow for player input and interaction in many different places. From our experience, there were a lot of players in previous Final Fantasy games who put down the controller to watch the beautiful cut scenes; they should watch out during FFXIII-2 if they don't want to be caught off guard," the producer notes.

Just before Final Fantasy XIII came out in the west, it was claimed by art director Isamu Kamikokuryou that there was enough content cut from the game to make a sequel. Naturally, when XIII-2 was eventually announced, one of the first questions was how much of that cut content would be included? How much of it could become DLC?

"This content was actually stuff that was rejected for inclusion in FFXIII because it did not make the required standards, and there are very good reasons we did not simply collect together all the rejected content and make a game out of it," Kitase says.

"For this reason none of it has been used in FFXIII-2. We put in a lot of effort into seeing that all the graphical assets re-used from the original game have been reworked or altered in some way to make them new and different."

With XIII-2 now nearly a month away, its release will come a year after it was first announced. The shorter turnaround to XIII, which was in development for five years before releasing in Japan, is thanks to using existing tech.

"When we started making FFXIII we had to create a development environment for the new generation of high end consoles pretty much from scratch, and this had a big effect on lengthening the development time," he says.

"For FFXIII-2, however, we could start by simply improving on the existing FFXIII engine, and this played a large part in cutting down the development period. This also allowed us to spend the time we would have had to use sorting out the environment and core system on constructing a good game."

Final Fantasy XIII-2 launches on January 31 in the US and February 3 in the UK and Europe for PlayStation 3 and Xbox 360.