It's time to bring back a classic genre.

What types of games have suffered a painful decline to the point where the genre barely exists any more? Brawlers, perhaps - Final Fight’s characters now live inside Street Fighter, and attempts to revive Golden Axe have stalled - though one could argue a certain breed of 3D character action game is descended from them, and last year we had a solid revival in Streets of Rage 4. Arcade sports games feel to have fallen out of the mainstream - indie efforts appear from time to time, but I wonder if we’ll ever get a game like NBA Jam, Red Card Football, or NFL Blitz ever again.

But, no. The most suffering of all genres is the light gun shooter - and it isn’t even completely the fault of the games.

It is fair to say that the games were partially to blame. In the mid-2000s titles like Time Crisis 4 and a slew of Wii light gun shooters were released - but at a time when games were bloating in size, length, and complexity, the hour-long rollercoaster of an arcade light gun game with some extra bonuses seemed a less than generous value proposition. Some games stuffed in extra modes to try to make up for it - slightly rubbish first-person-shooter style extras that arguably dragged the rest of the package down. The release of a bunch of all-timer FPS games can’t have helped, either - things like Halo 3 and Call of Duty 4 were providing the cinematic thrills that were previously the purview of arcade shooters.

It wasn’t all the fault of the games, however. The other factor was technology. As the world switched to flat-screen LCD and LED displays, light guns had a problem: the traditional mechanism by which the gun registers where you’re pointing on-screen flat-out doesn’t work on modern displays. That’s why, if you bought one of the rare PS3 light-gun games, you had to dangle a bunch of crap around your TV to play. That’s why the genre was so prevalent on Wii, where a sensor bar was an integral part of the console setup. That’s why in actual arcades, modern shooting machines such as the newest House of the Dead have enormous bezels around the screen - it hides the sensors.

Sales of light gun games in that generation proved the dark truth. People couldn’t be bothered with that stuff. I barely played Time Crisis 4, a game I’d clocked in arcades many times, because I was too lazy to mess around with sensors. In many ways TC4’s PS4 release seemed to herald the end, showcased perfectly in the hideous design of Namco’s GunCon 3 accessory, breaking a streak of iconic PlayStation light guns with a hideous design that welded a Wii Nunchuk onto the front of the gun, a concession for those previously-mentioned add-on modes designed to pad out the package.

Over on Wii, however, the genre was thriving. Endless plastic gun-shaped shells for the Wii remote filled every bargain bin in the land. But the Wii Light guns had an open secret: they weren’t quite right. The Wii solution worked like a mouse pointer, which meant that rather than aiming on instinct, you dragged a cursor around the screen. The cursor wasn’t even that accurate to where you were actually aiming, and that meant the magic light gun feeling of being a sharpshooter, a veritable Clint Eastwood - was gone. You were a guy moving a laser pointer around.

For years a solution has seemed out of reach. But finally, we have one: the Sinden Light Gun. This solution comes from one light gun fanboy in the UK, who after slaving to create a prototype of his idea took it to Kickstarter. That Kickstarter (which, full disclosure, I backed) raised £239k, and since guns began shipping, a further £1.75 million has been raised for further production runs via IndieGoGo. 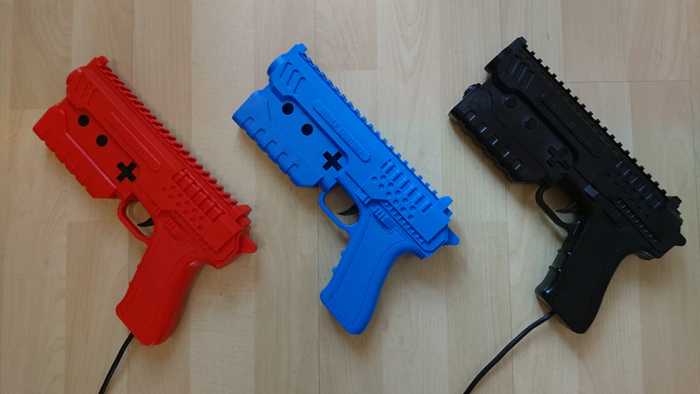 The Sinden has raised so much cash because it bloody works. It feels like black magic. In many instances, it actually feels more accurate than the CRT-based light guns it’s aiming to replace. It’s no longer crowd-funding - it’s a fledgling business for its creator. The guns now exist in multiple colors (red, blue, and black) and can be had with or without arcade-style recoil when you pull the trigger or yank its pump-action reload.

Here’s a basic explanation of how it works. Rather than a mere sensor, the barrel of the light gun actually contains a camera. On the game side, a small border is drawn around the game's visual output - depending on the conditions you’re playing in, this could be as little as 1% or 2% of the screen. When the gun is pointed at the screen, rather than the game, it looks for the border - and then uses smart image recognition and some software trickery to figure out where exactly within that border you’re aiming. It then feeds that back to the game, and… down goes that target, militia soldier, duck, or alien.

No cursors (unless you want them). Very little lag. Minimal to no game-specific calibration. It's a dream. Yes, the first setup was a little fiddly - the Sinden config app throws a whole lot of options at you in a very raw, unfiltered and as-yet unpolished way, so I was left poring over the official wiki and soliciting advice from the lovely Discord community that's sprung up around the gun. Once I got past that however, everything was smooth. I’ve been experimenting with my Sinden light guns, pushing them as far as I can, and, well - they just work. Simple as.

When I say I’ve been pushing them, I mean seeing how much further they can go than traditional light guns or pointers. For instance, 3D tracking tech built into the software means that the gun is still pin-point accurate when you’re standing off at an angle from the screen. So long as it can see the border, it works it out. I played the first few stages of Time Crisis standing at a nasty 45 degree angle - it worked great. Moving around mid-game won’t lose your calibration. In general, you can stand further back, at angles, and actively move around more than with the alternatives.

I tried different displays - a 50” 4K OLED, an older 24” LCD display that sits behind an arcade machine’s protective plexiglass front, and a larger, curved LED screen. All worked. All of this was possible with two guns and players, too. I even got it working on a projector, which meant House of the Dead on a 100-inch screen, which is, y’know, the dream. (Incidentally, the 3D tracking has me wondering if Konami arcade shooter Police 9/11, which had a full body-sensing setup, could be somehow emulated with this gun).

The Sinden Gun is most at home on a PC or Raspberry Pi, but it’s actually compatible with a range of older machines including PS1 and PS2, though you will need a Raspberry Pi or similar as a ‘middle man’ machine to run the software. Some of the PC light gun games that were built to be played with mouse just work with this gun, like the old abandonware versions of House of the Dead 1-3. There’s even a decent number of light gun shooters hiding away on Steam. And, of course, the gun pairs perfectly with emulators or dumps of modern or classic arcade shooters - so long as you have the right to play them.

Anyway. I’m astonished by this thing. It’s an incredible piece of technology, and what’s particularly exciting is that in many ways it’s still early days. Production is still very ‘indie’, and the software is still being regularly updated to bring more functionality, settings, stability, and features. I was perhaps predisposed to hope it works; I’m a light gun fan, I own a couple of arcade cabinets, I’d used many functional but less-satisfying Wii-style guns for emulation, and I did back the kickstarter. But it has already generously exceeded my expectations. The biggest downside, though subjective, is probably the price, which is reasonable but not exactly cheap - £80 for a gun without recoil, £130 with, and £155/£250 for two-player packs with or without recoil. But one hopes, if these things take off, that mass production could drive the price down.

And that leads me to the ultimate point of this article. Video game publishers - I’m calling you out. Bandai Namco, Sega - you pair in particular - there is no longer an excuse. Light Gun Games can now work on modern displays. It’s time for Time Crisis, Point Blank, House of the Dead, and Virtua Cop collections on modern hardware. We've heard word of remakes of HOTD 1 & 2 already - but honestly, these games don't need to be remade or even remastered. They just need to run, and be compatible with this new technology - which is already the case through emulation on PC. If a developer is building a port and it doesn't support similar technology to this, they should bin it. There’s also a range of newer light gun games that have been trapped in arcades - Time Crisis 5, House of the Dead 4 and Scarlet Dawn, and many arcade shooters from other publishers have no home ports at all.

The Sinden Gun tech is owned by its creator, but he has already proved willing to work with third parties. Mini arcade cabinet producer Arcade1Up has used Sinden tech for the guns on its Big Buck Hunter machine, which is out now, and all-in-one retro console Polymega is releasing an officially licensed Sinden-powered gun for players to experience classic shooters on their machines. Sinden’s software could easily run in the background on PlayStation, Xbox, and Switch - and the PC solution already exists. All we need are official releases of the games, and for publishers to pick up the phone and license this technology.

Basically: it’s time for the GunCon 4, powered by Sinden. One can dream, right? And even if that doesn’t come to pass, at least we now have a reliable, accurate way to play the classics.