It’s a sunny day in Anaheim and BlizzCon is in full swing. There are D.Va cosplays as far as the eye can see, there are workers in official-looking vests stopping dead-eyed convention goers from walking in the road, and there’s a hint of weed hanging in the air.

But just away from the metal detectors and the queues, another kind of crowd has formed. Instead of D.Vas and styrofoam pauldrons, there’s people wearing Winnie the Pooh onesies and breathing masks, holding placards that say “Free Hong Kong”.

The protesters are here to speak out against Blizzard after the game company suspended Hearthstone player Ng “blitzchung” Wai Chung. The esports pro used his winner’s interview to call for democracy in Hong Kong following a spate of protests and police brutality in the former British colony. Blizzard also rescinded his $10,000 in prize winnings, though it reinstated these winnings and reduced the suspension after a public outcry - an outcry that has been loud and sustained, culminating in these physical protests at Blizzard’s premier event.

On the first day of the show, Blizzard president J.Allen Brack took to the stage to issue an apology. "Blizzard had the opportunity to bring the world together in a tough Hearthstone esports moment a month ago,” he said. “We did not. We moved too quickly in our decision-making, and then to make matters worse, we were too slow to talk to all of you. 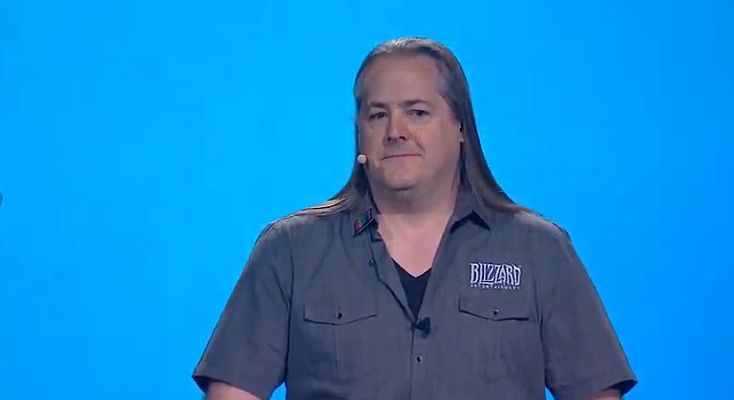 "When I think about what I'm most unhappy about, it's two things. The first is, we didn't live up to the high standards we set for ourselves. The second is we failed in our purpose. And for that, I am sorry, and I accept accountability."

Outside of Blizzard’s headquarters there is a plaque with the company values etched into it. Among these values are “think globally” and “every voice matters”, both of which seem to fly in the face of the decision to punish blitzchung for speaking his mind. The apology during the opening ceremony also failed to make any promises to prevent something like this happening in the future, and Blizzard failed to respond to VG247 when we asked for clarification on what the rules are. For the protesters, it wasn’t nearly good enough.

“The only reason why this apology was made in the first place is because of the social pressure that was put on them,” one protester told me. “So you could say they apologised, but I would debate the legitimacy of that apology. I think if we had remained silent, blitzchung would still be banned, you’d still see them actively allowing the free market to be manipulated by governments.”

This last point is a reference to Blizzard’s Chinese partners, NetEase. Blizzard as an entity is not allowed to publish or distribute games in China because of Chinese regulations, so NetEase handles that side of the business for them.

“Was NetEase in conversation around this issue? They were, certainly,” Blizzard president J.Allen Brack told PCGamer in a phone interview during the show. No press at the show had access to Brack. “As were the [Blizzard] Taiwan team, as was the Hearthstone leadership team, as was the esports team. All those various constituencies came together and one of the things that we said was we acted very rapidly and we acted very quickly. And that's certainly the failure of this story is those groups coming together and deciding in a very short amount of time what the right action to take forward was.” 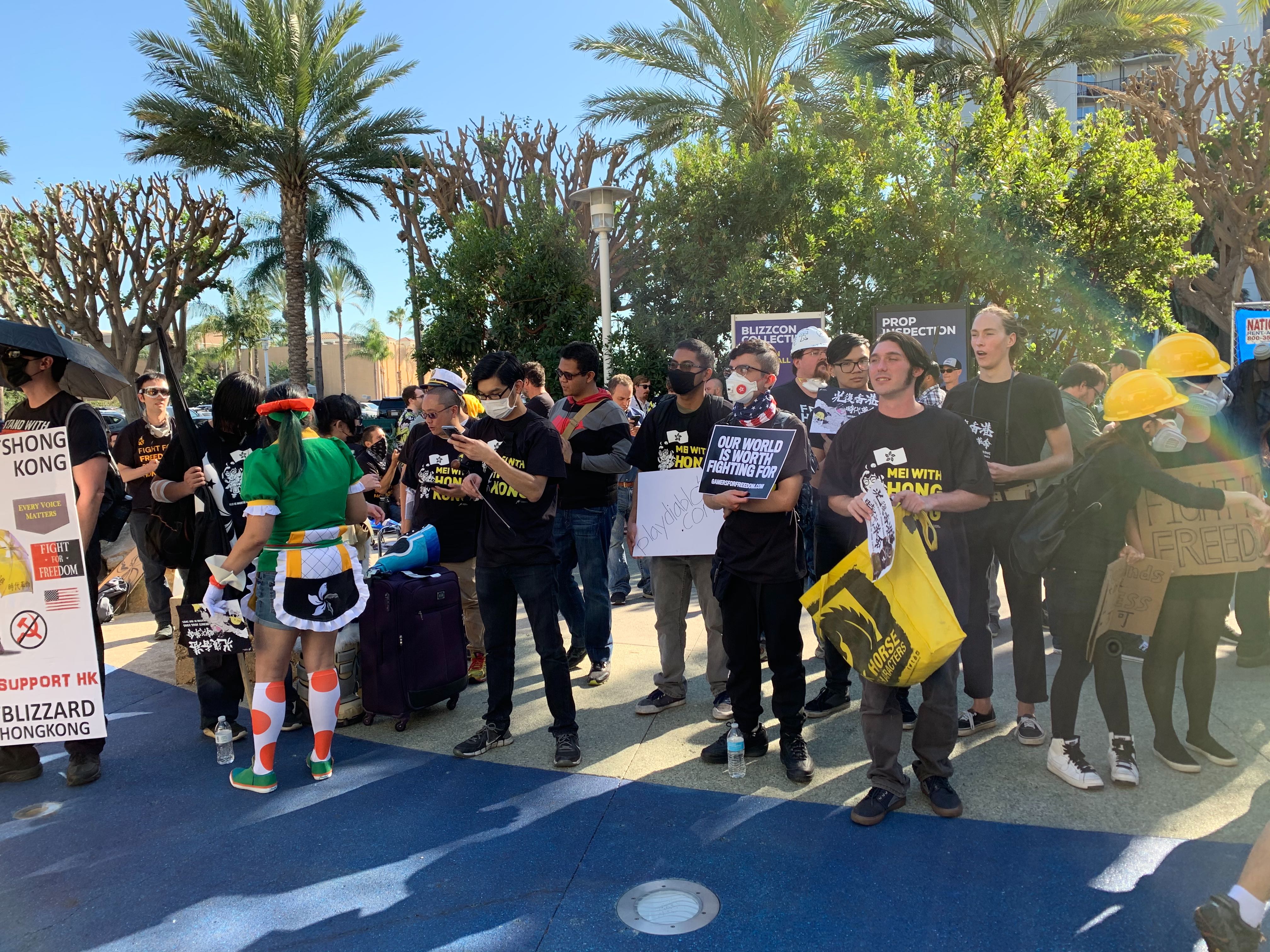 Brack also revealed that NetEase made the decision on its own to post a statement to Chinese microblogging site Weibo, saying the ban was made to “defend the pride of China”. According to Brack, Blizzard would not have authorised that post if it was asked, but it was not asked. However, it was only four weeks ago that Blizzard said its relationship with China had nothing to do with the decision at all. For the protesters, it’s clear that Blizzard is putting profits before its own values.

“I feel like the apology itself is illegitimate,” a protester explained. “I don’t feel like it’s ‘I’m sorry we messed up’, it’s ‘oh crap, people are upset that we’re greedy and now we have to backpedal’. They’re doing the best they can to mitigate the damage. I feel like if it were a genuine apology, people would start getting unbanned from the reddits, there would be more of a show of presence instead of just hollow words.”

Dayton Young, director of Fight for the Future and one of the organisers of the Gamers for Freedom protest, shares this sentiment.

“It didn’t address the overall issue of them punishing blitzchung in the first place for speaking out and advocating for his own freedom peacefully,” Young explained. “It doesn’t address the livecasters who have also been punished for simply being on the stream when bliztchung made his protest, and it also doesn’t address the American university students, Hearthstone players who made a peaceful protest and were punished by Blizzard. It also doesn’t explain to us what Blizzard’s rules are. If they thought people were offended by the original protest, why would they prioritise their offense over our offense - the offense of congressional leaders who are writing letters to Blizzard.

“It’s a small step in the right direction. It lets us know Blizzard is listening, but they need to engage with us. They need to do more than stand up on a stage and say they’re sorry. They need to wipe away all the punishments on the people who have been affected by the protests, and they need to come to us and talk to us about what’s next, in perpetuity, not just in this instance. Basic free expression is very important for them to protect, and of course we understand they need to moderate, but whatever decisions they make, whatever rules they have in place, they need to be there in place after talking to the people who actually play their games. It’s about transparency.” 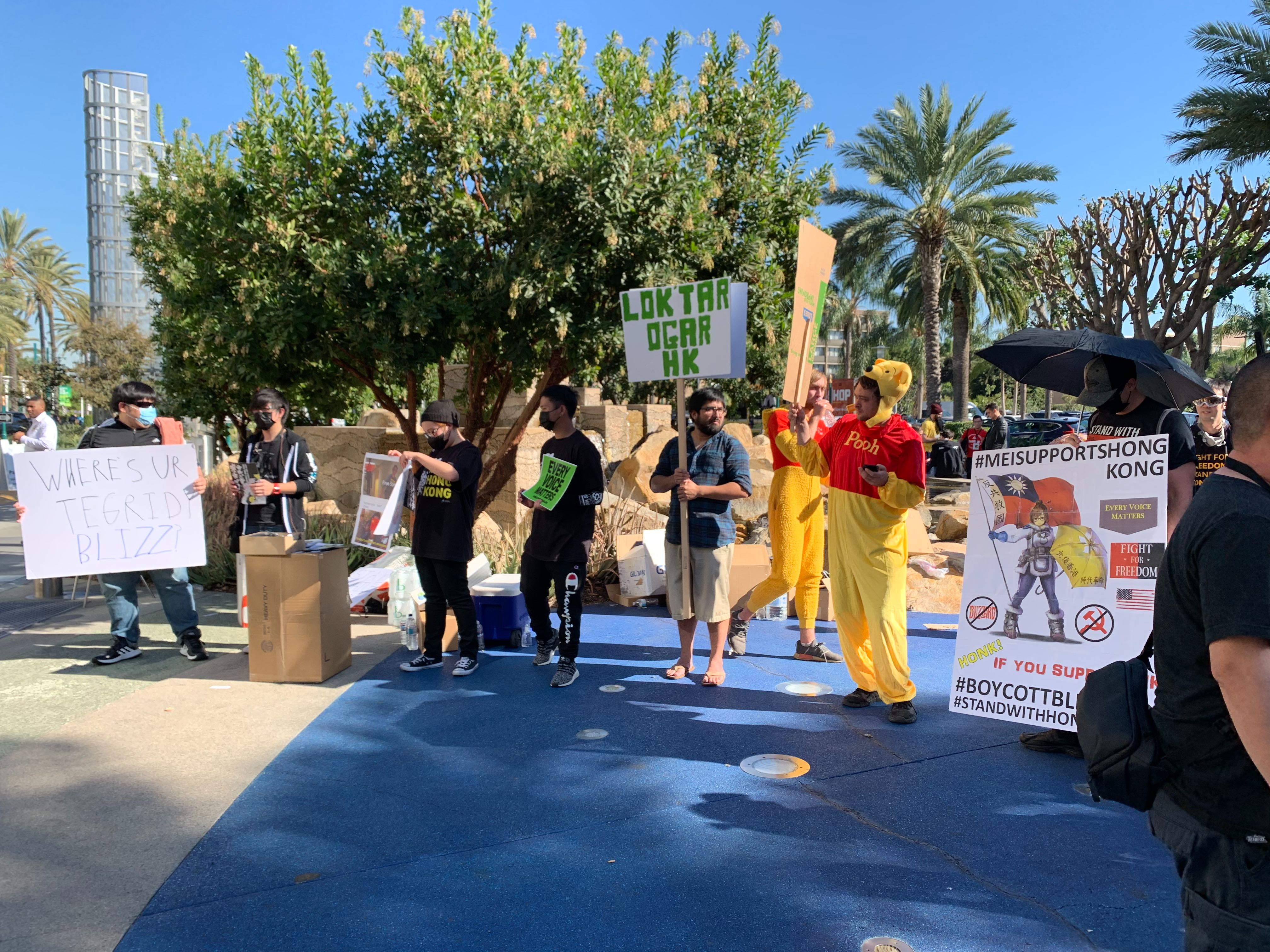 The PCGamer interview appears to be an attempt at transparency, with Blizzard saying that people are free to express themselves on their own social media, just not on official streams and Blizzard events. It’s all a bit Animal Farm, but instead of some animals being more equal than others, “it’s every voice matters in these specific circumstances” (when it doesn’t affect our earning potential). Just last month, one Overwatch coach was pressured into deleting a tweet speaking out in solidarity with blitzchung and his right to protest.

“Blizzard has shown no hesitation to ban, fine, and censor members of the gaming community in Hong Kong, America, and Canada for what Blizzard deems to be ‘political’ speech,” Dayton Young told me in a follow up email after he had read the PCGamer interview. “But Blizzard President J. Allen Brack wants us all to believe that the global games developer with $7.5 billion in annual revenue is somehow powerless to stop its corporate partner NetEase from making an extremely political statement pledging to ‘defend the pride’ of China.

“J. Allen Brack is a liar and a bully. Under his leadership, Blizzard is acting on behalf of an authoritarian government to censor political expression. They are censoring gamers on their own platforms. They are censoring gamers on other platforms as well. Yet they are bowing to corporate partners in China who do the same thing. They are placing profits over the safety and freedom of gamers, and that's disgusting.

“It's clear that Blizzard does not believe in its own corporate values. But gamers do. We believe that every voice matters, so we speak up for those who are being silenced. We think globally, so we support our fellow gamers around the world who are living under fear of political persecution. We are leading responsibly by organizing gamers in acts of peaceful political protests. And we'll keep fighting until Blizzard makes this right, because we believe that our world is worth fighting for.”

Blizzard was likely hoping that the opening ceremony apology would put all of this to bed, letting them focus on big reveals such as Diablo 4 and Overwatch 2. From what I’ve seen, however, it’s far from over.