LEGO recently announced the LEGO NES, which introduces a contemporary but nostalgic spin to the iconic Nintendo console.

The LEGO NES is a brick-built model kitted out with an '80s style TV - also made of LEGO, obviously. It's being launched as part of the next step in the brickbuster giant's Super Mario Bros. partnership with Nintendo, and despite being made of plastic bricks with little studs on top, it's mechanically-functional.

"The new NES Building Kit will include a controller with a connecting cable and plug and even an opening slot for the Game Pak with a locking feature," reads an official press release. "The console also comes with a buildable retro TV, featuring a flat 8-bit Mario figure on the scrolling screen."

The press release also clarifies that builders can scan in a LEGO Mario action brick from the LEGO Mario Starter Course set, which will react to enemies and obstacles just like its plumbing counterpart in official Mario games.

“Super Mario has been a cherished figure in the gaming world for over thirty years now,” said LEGO Nintendo Entertainment System creative lead Maarten Simons. “Many adults still fondly remember that first time they saw Mario leap across the small screen, even if the graphics were a lot simpler than they are today."

"With the LEGO Nintendo Entertainment System, we’re letting them truly indulge in that nostalgia, recreating one of the most-loved consoles of all time so they can see the Super Mario from their childhoods once again – and even to share the experience of gaming in the 1980s with their own children.” 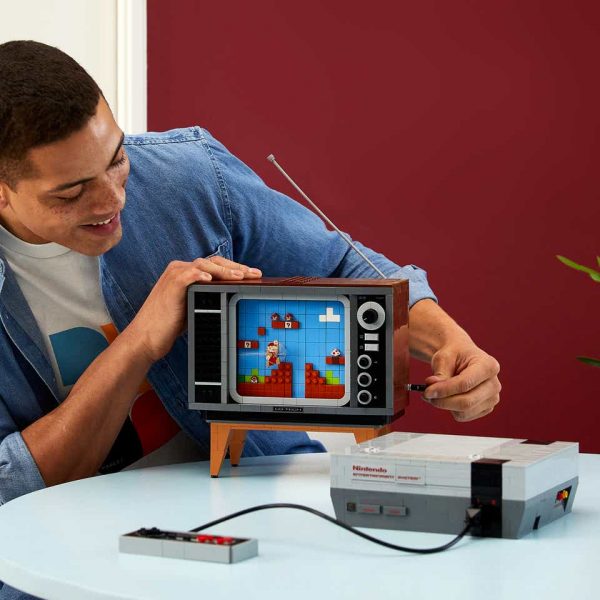 It was recently revealed that the LEGO Super Mario set was in the works for four years, and that the company wants to do more Nintendo IP in future. The original set featured an interactive LEGO Mario, and various Power-Up Packs have been launched since.