Have you ever seen Star Trek Into Darkness? For the most part it’s a story of shuddering spaceships and lens flare, concerning warmongers and weapons of mass destruction. But for ten glorious minutes, right at the beginning, it takes us somewhere very different. On the volcanic surface of the Class M planet Nibiru, barnacles cling to the chalky branches of trees with crimson leaves, their globular antennae reaching out to say hello. Huge toothy mammals roam the forests, and strange scrolls impart lessons none can read. Everywhere there is the noise of a world undisturbed: the scratchy calls of alien birds and the whoops of unseen simians.

Journey to the Savage Planet is a game for everybody who watched that scene and wanted to stay there. It’s developed by veterans of the open-world shooter genre, people used to building scorched lands soundtracked by the crack of machine gun fire. But instead they’ve put their heads together to invent a colourful new world defined not by the invaders coming into it, but the ecosystem already there.

You can see the toolset of contemporary action games replicated in Savage Planet: the double-jump, grappling hook, mantling and crouched stealth practically standardised across the FPS genre. Yet you’re only given one gun, and even that’s less a weapon than a poking stick - a way to knock on the glass of the enclosure and see how the creatures inside respond. 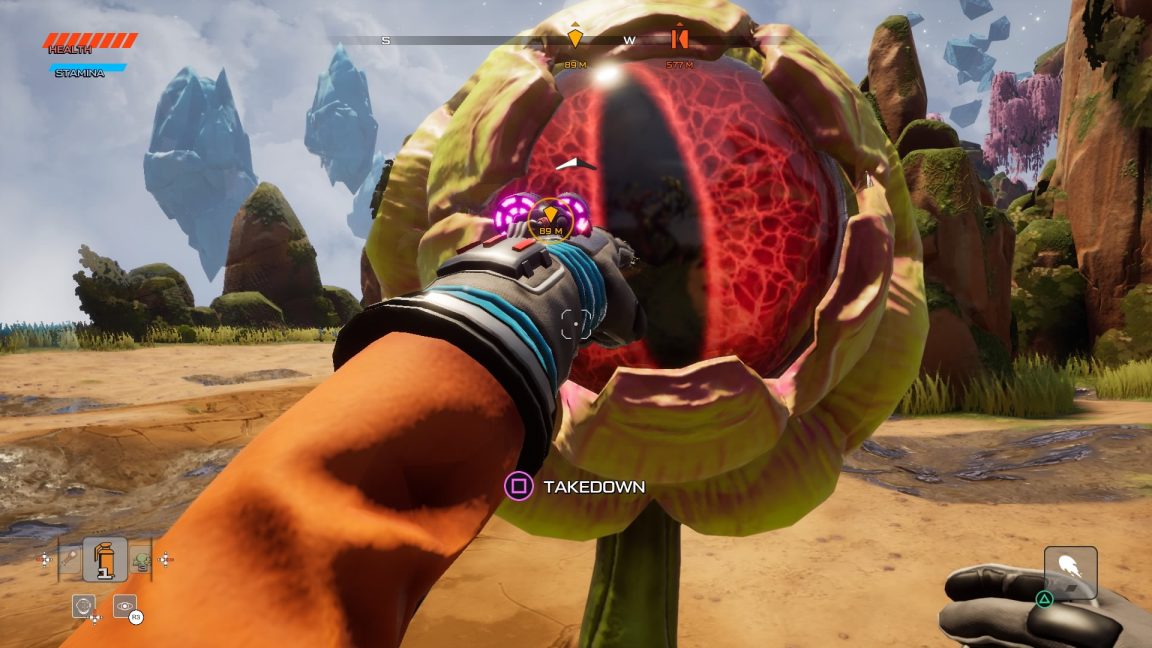 The joy of exploration is in discovering fauna and flora, and in finding out whether the plants can be persuaded to eat the animals. Try kicking a Pufferbird into the serrated maw of a carnivorous Meat Vortex; it’s like owning a fancy sink with a waste disposal unit.

That I have the names of all the native organisms to hand isn’t testament to my journalism so much as the fact that Savage Planet equips you with a scanner. Much of the game is given over to identifying the creatures you come across - hiding in the tentaweeds to snap an airborne octopus as it drifts past, or glueing purple birds to the ground so you can catch them under your lens.

The photography isn’t optional: many of the equipment upgrades in your tech tree are tied to scientific progress, which means you won’t be getting bouncing bullets or quadruple-jumps without stopping to scan your surroundings. But that’s not the chore it might have been on another, less surprising world.

Savage Planet shares a creative director with Far Cry 4, AKA the one where the wildlife truly went wild, and both games operate by the same principle. The AI tends to make a big splash and often intersects, setting off chains of unintended consequences. You might shoot a Jellywaft out of the sky, for instance, sending its payload of acid sizzling across the earth beneath, which sets off the suicidal self-defence explosion of the Alpha Pufferbird, which in turn splits a nearby four-headed Baboushka into a pair of two-headed birds that scream like goats as they run into the underbrush.

Every time the unexpected happens, you laugh and you learn something. Mastery in Savage Planet comes not from upgrading your toolbelt but by understanding the utility of the bizarre beings around you. If the seeds found hanging in gelatinous sacs are thrown onto the flowers of a cactus, the spiky plant grows a bouncy green launching pad. When the Meat Vortex munches a Pufferbird, its vines retract, opening a new pathway.

Your mission concerns an enormous central tower, and navigation is as much vertical as it is horizontal. Think of the secret-driven exploration of Doom 2016, taken to an extreme that pushes shooting to the sidelines. This is a game ruled by its distractions - even if you push on up the tower, your ultimate goal is to find enough fuel to leave, since your corporate line managers haven’t seen fit to fund a return trip. And that fuel isn’t discovered by ploughing straight ahead, but by nosing into corners concealed from view.

As a corporate satire, Savage Planet is overfamiliar and unstriking - more an after-work gripe with a colleague than a devastating takedown of economic paradigms. Anthony Burch is credited with some of the writing, but thankfully Borderlands’ dysenteric approach to dialogue isn’t mimicked here. The best comedy is found instead in the company of screaming Baboushkas, and in a series of gross-out adverts that play inside your landing capsule. Meat Buddy, the sentient pal made from discarded food waste, will stick with you long after you stop worrying about Death Stranding’s baby jars.

What Savage Planet does deliver in the place of commentary is a nagging sense that its world would be better off without you. As in Far Cry 4, the locals only suffer for the presence of meddling players.

Even now though, with the tower delved and the ship refueled, I’m finding it difficult to leave. How can I when, just today, I realised that it’s possible to use the blast of a Bombegranate to punt my protagonist to a distant floating island? Or that, if I leave a bundle of crafting carbon near the entrance of a dark den, the valuables will draw out the Burglesnatch?

As any Trekkie will tell you, discovery is addictive, and Journey to the Savage Planet is almost all discovery.