It Takes Two is a wonderful, childlike co-op adventure for everyone.

I didn't expect EA and Hazelight Studios' to deliver so many gut punches in It Takes Two. A co-op platform-puzzle-shooter-action-rpg-racing-flying-adventure game about two dolls going on an epic quest together in and around their house seemed like a light-hearted setup, and indeed there's loads of fun and fantasy on offer here, but it's peppered with some proper emotional weight that ties the magnificent absurdity together in a surprisingly grounded way.

Games designed to be played cooperatively aren't new by any means, but just like Hazelight's previous game, A Way Out, It Takes Two can only be played alongside someone else. There's two-player split-screen or online multiplayer, with no bot support. You can give a friend a special pass so they can play with you without buying the game, which is nice and should widen the appeal of It Takes Two rather considerably.

The real point of difference between It Takes Two and a normal co-op experience, though, is how the levels are designed to require two people. This isn't just someone being needed to open a heavy door or press a switch, this is performing a circus act together to get a ball over a chasm; it's shouting at someone to activate platforms so you can perfectly time your leaps to climb to the top of a very dangerous wall; it's actually doing things that simply couldn't do on your own. And it's great.

The setup here is that Rose, a young girl, is very sad when she learns her parents are separating. Her tears fall onto two of her dolls, transporting her parents (Cody and May) into the dolls. You play as one of these two dolls (a friend the other) and must make it through a number of miniature worlds set in the real world and more abstract fantastical places that have a link to reality. Along the way you'll discover if Cody and May can repair their relationship, the pair somewhat guided by anthropomorphic self-help book, Dr. Hakim. 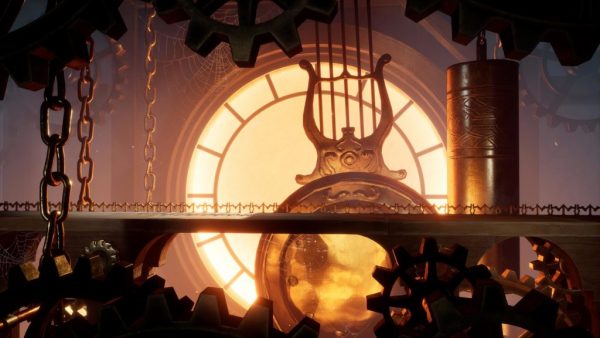 It Takes Two is a little on the dark side at points, with one scene in particular causing a rather instinctive unwillingness to carry out the awful task set before me, but these moments fit well within the context of the story. For the most part, though, this is fantastic escapism of the joyous kind. The core concept of people being shrunken and having to tackle the creatures and obstacles that suddenly pose a threat was brilliant in Honey I Shrunk the Kids many, many years ago, and was equally absorbing in the recent Grounded from Obsidian. Here the journey is longer, more inventive and magical than you're probably expecting.

I played through the entire game alongside my son in split-screen, and it's testament to designers that he'd always start guessing what the next special weapon, ability or tool we'd be given next was going to be. Hazelight has done a brilliant job in keeping gameplay fresh, with the adventure moving through a large number of distinct themed areas, each with a new mechanic to play around with. While the game is broadly a puzzle-platformer, at points it veers off in other directions, becoming more of a shooterz, an isometric RPG, and even flying game.

On the whole the puzzles in It Takes Two aren't too taxing on the brain, but during my playthrough I did scratch my head a few times and was saved by my son's ability to be smarter than I am. While some of the gameplay mechanics on offer change up all the time which might be a little daunting for less seasoned players, the key to success is working together without getting too angry at the other person for not doing exactly what you wanted at the exact right moment. 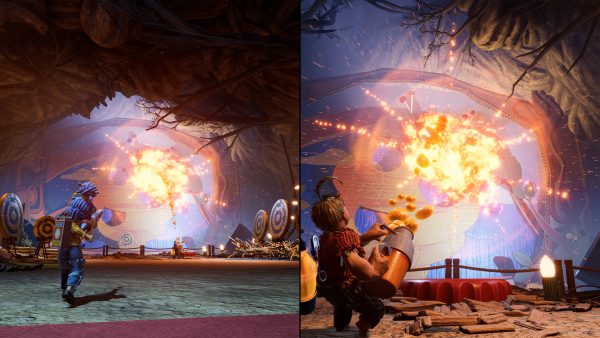 Capitalising on the fact that you're going to be playing with a real person, hidden around the levels are mini-games. These deliver quick bouts of head-to-head competition. Some are a lot better than others, and all of them can be accessed directly from the game's main menu once you've found them in the campaign. They are all neat enough extras, but generally they felt a little less inventive than the gameplay on offer throughout the core game.

Part of what makes It Takes Two such a success is how wonderfully it's presented. The overall tone might make you think this is skewed towards cute-indie-game that might lack some of triple-A development's fineries, but this is a gorgeous game packed full of superb art and design. It's a real stunner at points, and the acting is top notch too - not only from the two leads, but also the bit-part characters. The expected garden/nature areas where you suddenly exist as a tiny person in a world of giant creatures all look brilliant, but it's the more out there areas that twist reality that shine the most. Long story short, I'd have taken a load of photos had the constant pausing to find the best angle not nearly been the cause of a relationship breakdown with my son. Which wouldn't have really been in the spirit of the game.

Honestly, It Takes Two is one of the most pleasant surprises in video games I've ever had. I went in more or less expecting a fairly gimmick-laden brief but fun escapade, but it's so much more than that. This is a game that I would recommend to anyone who longs for the kind of no-holds-barred childlike fantasy so common in the 80s but seems less common today. If that is you, don't sleep on this real gem.