It's pretty much impossible to talk about Sega and Amplitude Studios' latest PC strategy game without talking about Civilization - so let's not even try.

Humankind blatantly owes a great deal of debt to Sid Meier's massive history-spanning series - but it's also trying to break out and do something different. To understand the game it's important to accept that it is a Civ-like - but then to examine what it does differently, and why.

The basic tenets of Humankind are still that of a 4X game - to explore, expand, exploit and exterminate. You take control of a civilization, a culture, and guide them from man's Neolithic days as wandering hunter-gatherers into the present day and perhaps even a little beyond. In this the game closely resembles Firaxis' Civ series; you move units around a grid-based map, capturing resources, growing your territory, founding cities and growing population in order to research future technologies to advance as time ticks ever onwards. Your rivals are other cultures like yours - but fall too far behind and your culture might be crushed militarily, or even with other systems of control such as religion and culture.

Where Humankind most keenly differs is in how your culture progresses. Typically in these sorts of games you pick a country or leader - say England or Shaka - and that selection carries bonuses with it that stay with you all game. This choice, made in the menus before starting the game, defines how you might play. In Humankind, these sorts of defining decisions are made as you go.

The game is split into six different eras, and each era has ten cultures. When players start, they are all equal: everybody is a simple wandering tribe. When you move up an era, you're given a choice between that era's ten cultures, but each culture can only be chosen once, meaning there are considerations on the player's part of when to advance to the next era. Do you rush to the next era to choose the Romans because you really want the Roman culture bonuses, or do you hold back to earn more prestige in your current era, risking somebody scooping your favorite choice?

The cultures will represent different approaches, of course. Some are more industrialist, while others will focus on military, mercantilism or science, among others. Each culture has abilities to support their natural leaning. As players advance through the six eras, the cultures picked will mean that each player's civilization will be a unique amalgamation of everything that has come before.

Rather than simply picking the USA and growing into what they're known for in the late game, a late-game Humankind culture will be representative of all that has come before, just like how, say, modern Britain has the hallmarks of the Romans, the Vikings and the Anglo-Saxons, among others. I haven't checked their math, but Humankind's developers say there are a million different combinations of culture in the game as a result of this. 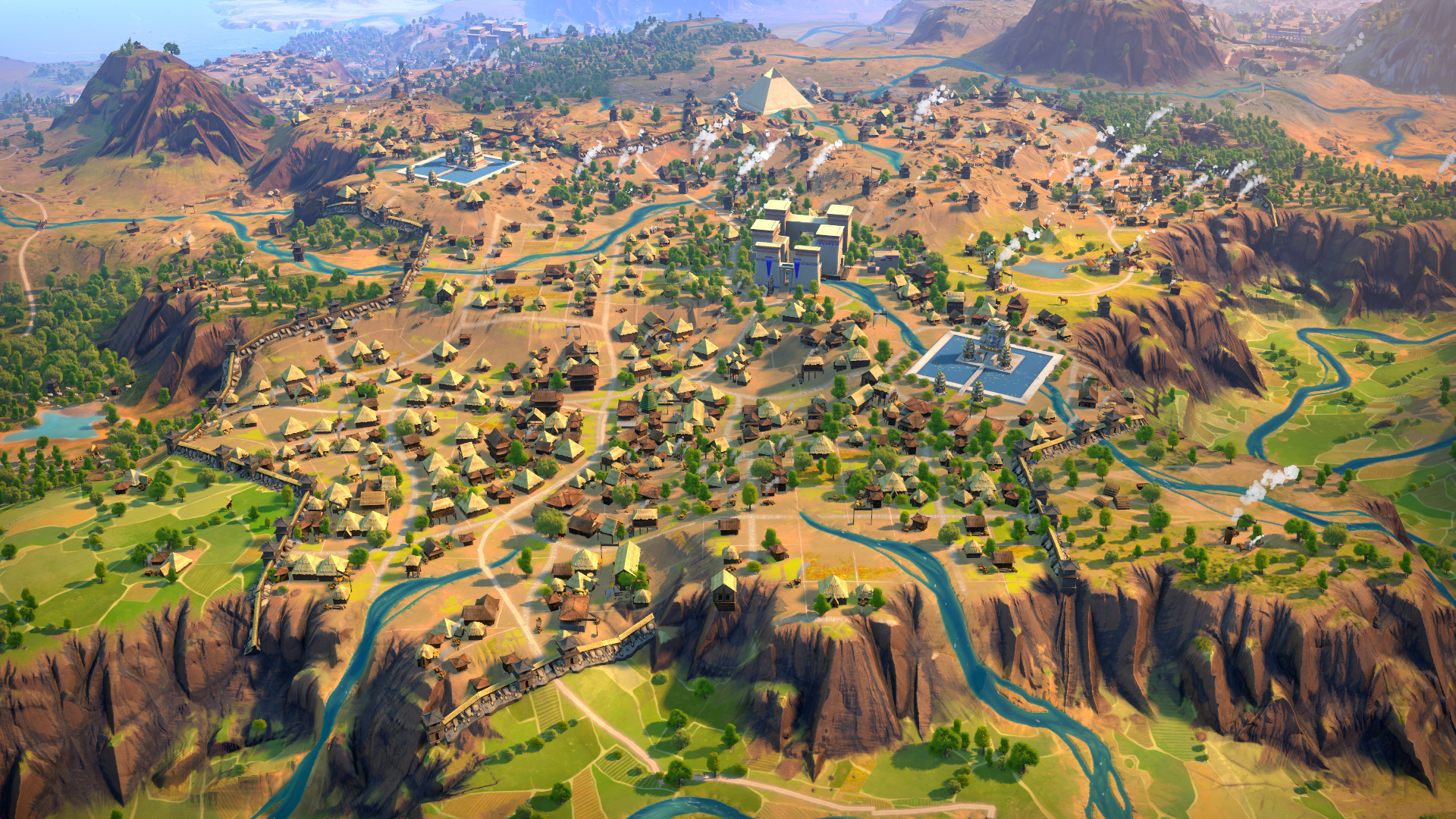 The impact of this is instantly felt in the hands-on, where I had a chance to advance from the Neolithic age into a more civilized culture. I picked the Egyptians first time out, wanting to focus on construction to out-perform my nearby rivals in sheer output; but I could've just as easily picked the Babylonians to focus on scientific growth or the Harappans to maximize food output and therefore population growth. This build had limited options but already the play styles felt massively divergent, giving Humankind a truly different flavor.

Something that Civ has struggled with a fair amount, especially as it's pursued accessibility, is win conditions that don't just involve conquering the globe. Humankind essentially does away with different win conditions for different styles of play and instead focuses down on one clear metric: Fame. This is the next most significant difference.

Fame is a measurement of your success and is an overall score that measures your 'impact' on the world. Come the end of the game your goal isn't necessarily to be the most militarily powerful, democratically respected, or scientifically or culturally superior. Instead, your goal is to have left the largest lasting impact on the world.

In this early-game hands-on, Fame can be earned through things like growing your population, engaging armies in war, or unlocking and enacting civic policies. You can also rack up Fame by being the first to do or discover certain things. Some Fame missions will pertain to the natural affinities and goals of the cultures you have selected, too. 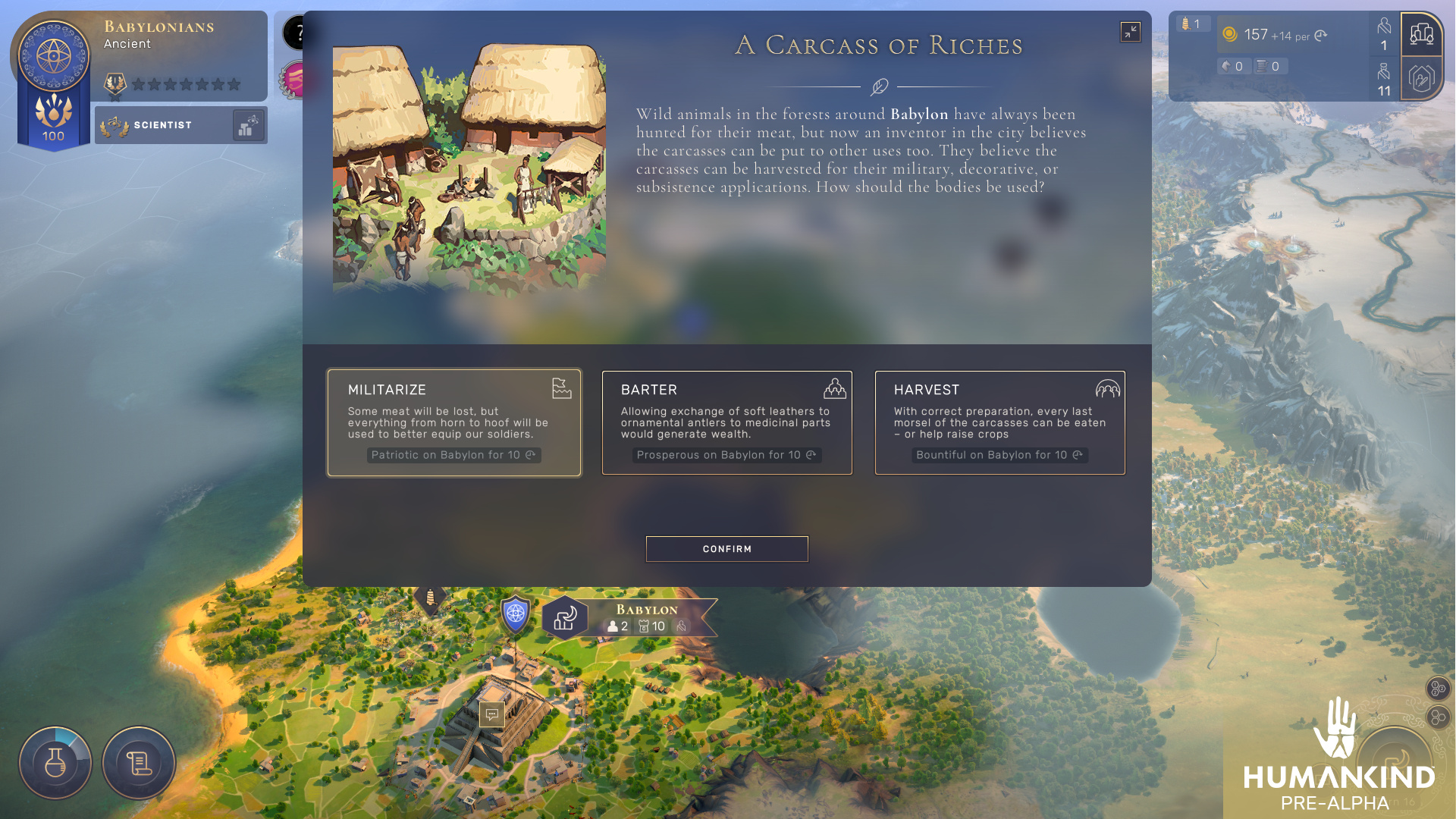 It doesn't matter how you're remembered, either. Fame is morally neutral. That means it can come from doing evil, like razing cities of your rivals, or it can come from good. Civics spread across a left/right spectrum that can go to the extremes on either side. You could totally win by being a borderline genocidal fascist if you want. Equally, you could win by primarily being a scientific powerhouse.

This is a really clever change that invigorates the way you can play. Most crucially, it means that time isn't 'wasted' on endeavors away from your core focus. If you're dedicated to science but end up in a war, you might still rack up extra Fame for a heroic stand on the battlefield. Again, it encourages you to expand out a bit. When a rival looked to be getting a bit too powerful, I took it to them with the military where I wouldn't usually, chasing after Fame and civic unlocks, which can be triggered by certain actions.

Once you get into battle, Humankind takes a greater cue from other Amplitude Studios strategy games like Endless Legend. Armies on any given tile on the map are made up of multiple units, and once battle is entered, these units split so you can fight a grid-based battle. Larger battles might go on for multiple turns.

Even early on you can get a sense for how quickly battles might expand - how rather than enclosed units having quick skirmishes, battlefield fronts can grow to span an entire border with your rivals, with a no-mans-land in the middle created by things like unit attack ranges and sight lines. This is the sort of thing you can't get a full feel for in a two-hour hands-on limited to the first proper era of the game, but broadly what I saw is very exciting. 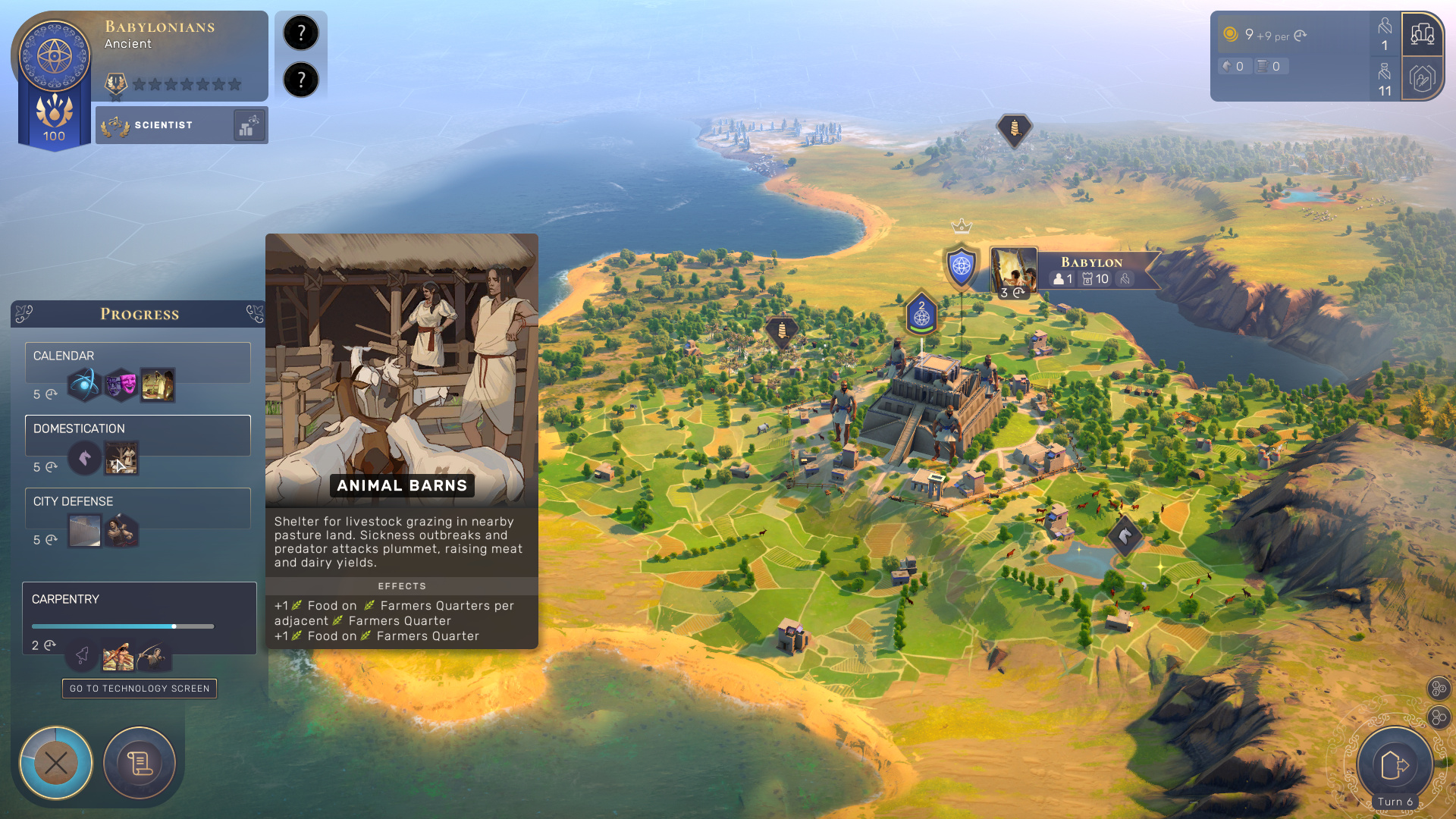 That's what this hands on taught me, really: Humankind is really exciting. Perhaps most interesting is that right now it actually seems to be a degree more complicated than Civilization 6 - there are more moving parts and there appears more player autonomy within each individual component of the game. That's exciting on one hand, but on the other it means Amplitude is playing with fire: it'll be a difficult balance to strike to ensure that the massively open-ended nature of its game doesn't lead to confusion. Humankind is bursting with ideas and experimentation that modern Civ wouldn't dare court - but such daring is obviously a risky proposition.

All this is said from, as mentioned, a short, two-hour hands on with one section of the game, of one era - one that I played twice for good measure. There's much we don't know about yet, like the integration of diplomacy, religion, and the true nature of the endgame - and a game such as this can have its success determined by these key elements. So far, however, Humankind is looking like a complex and unique take on the historical grand strategy genre.

While the surface resemblance to Civ might work as a helpful shorthand to help sell the game, it's clear that there's a lot more going on here. This is no simple clone. When I first saw it at Gamescom 2019, it was pitched as a Civ killer, the first true rival 2K's series has had in years, coming from the creator of other successful 4X games and put out by the publisher behind Total War. That's a powerful elevator pitch, but now it's clear Humankind has the in-game framework to match - it just has to be shaped and defined before final release.

Humankind was originally scheduled for a 2020 release, but it's now been shifted back to 2021 - so the team will have time to refine it.