Hitman's Agent 47 knows a thing or two about murder. Which makes him the ideal person to solve a locked room murder mystery...

Hitman 3's Dartmoor level is one of the unique levels in the Hitman 'World of Assassination' trilogy, and that's thanks in large part to the unique storyline that runs through the level. While Agent 47 is there to carry out a hit on Alexa Carlisle, somebody has already been up to no good in her mansion: Alexa's brother Zachary has been murdered in his bed. This leads to a quest line within the level, or an opportunity, as Hitman calls them. It's known as 'Death in the Family'.

Alexa has hired a Private Investigator to come to the house and help solve the murder - and if you choose to take the identity of the P.I., 47 can undertake the task of solving the murder himself. This is a fun change of pace and a different type of challenge for the Hitman player - but it also gives 47 some opportunities to get closer to his target.

Before you can start the Death in the Family opportunity quest, you'll need to get the disguise of the Private Investigator. If you're fast, you can take him out quickly as the level starts - either by using coins to distract him before he reaches the mansion at all, or by letting him reach the mansion, following him, then sneaking through a window to the right of the main entrance - he enters this secluded hallway shortly after entering the mansion, and you can take him out here and hide him in a nearby cupboard. Be warned that if you try to enter the mansion manually, even as the detective, you'll be frisked for weapons.

Once you're the detective, you simply need to follow the prompts and characters until they lead you to the scene of the crime. From there, your detective work on this Death in the Family mystery truly begins. In the ensuing guide, we'll describe where to find all clues - but avoid giving spoilers as to who the killer might be, or what happens if you identify them correctly or incorrectly. 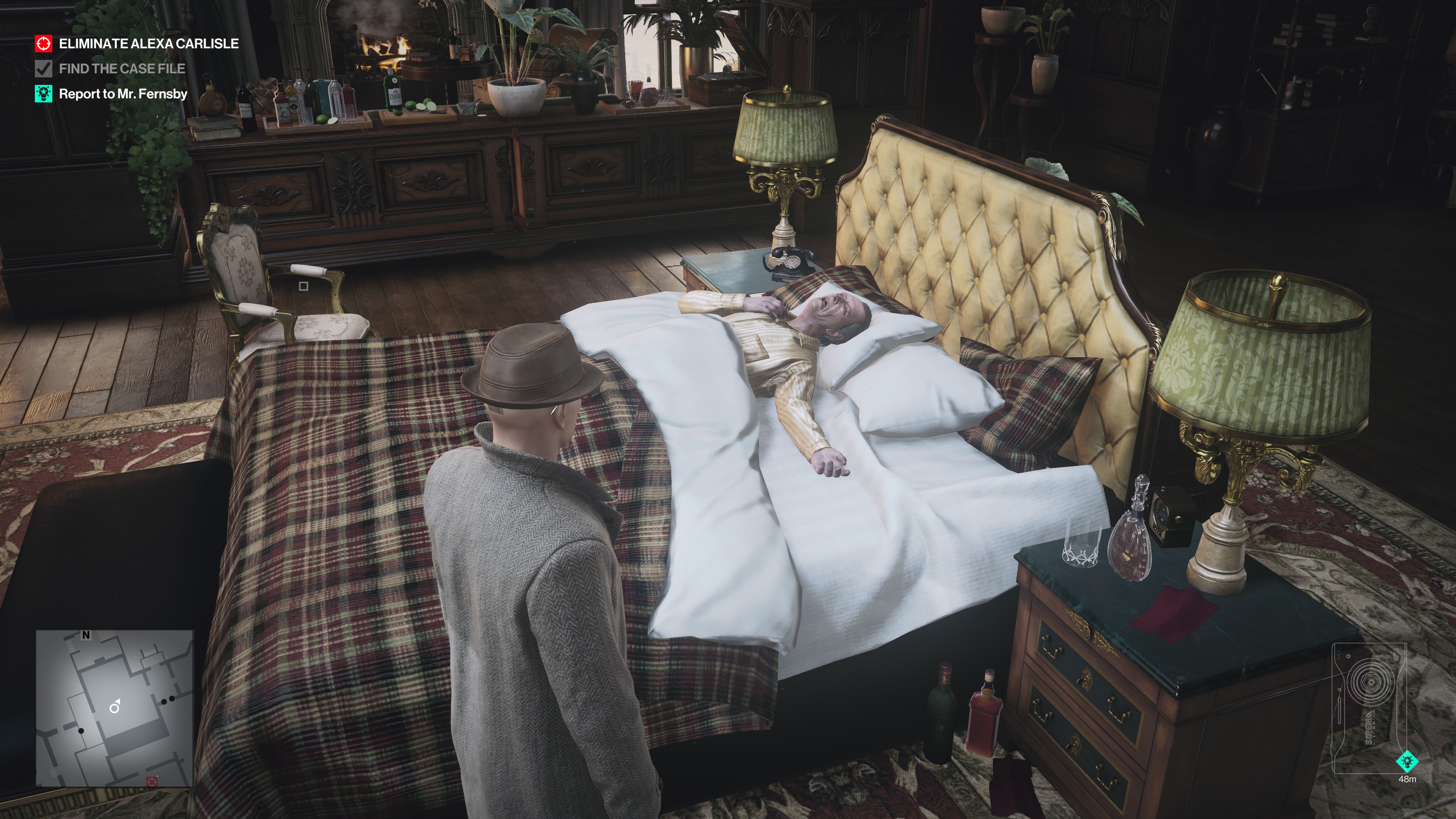 Once you've been given the case, you'll be pretty quickly ushered to the bedroom of Zachary Carlisle - the poor murder victim, who is still in his bed, rigor mortis fully set in. After some chatter, you'll be left alone in the room. The menu will make clear that there are six clues to find in the room, but being Hitman, you can leave and move on at any time. We'll help you to find all six, however: 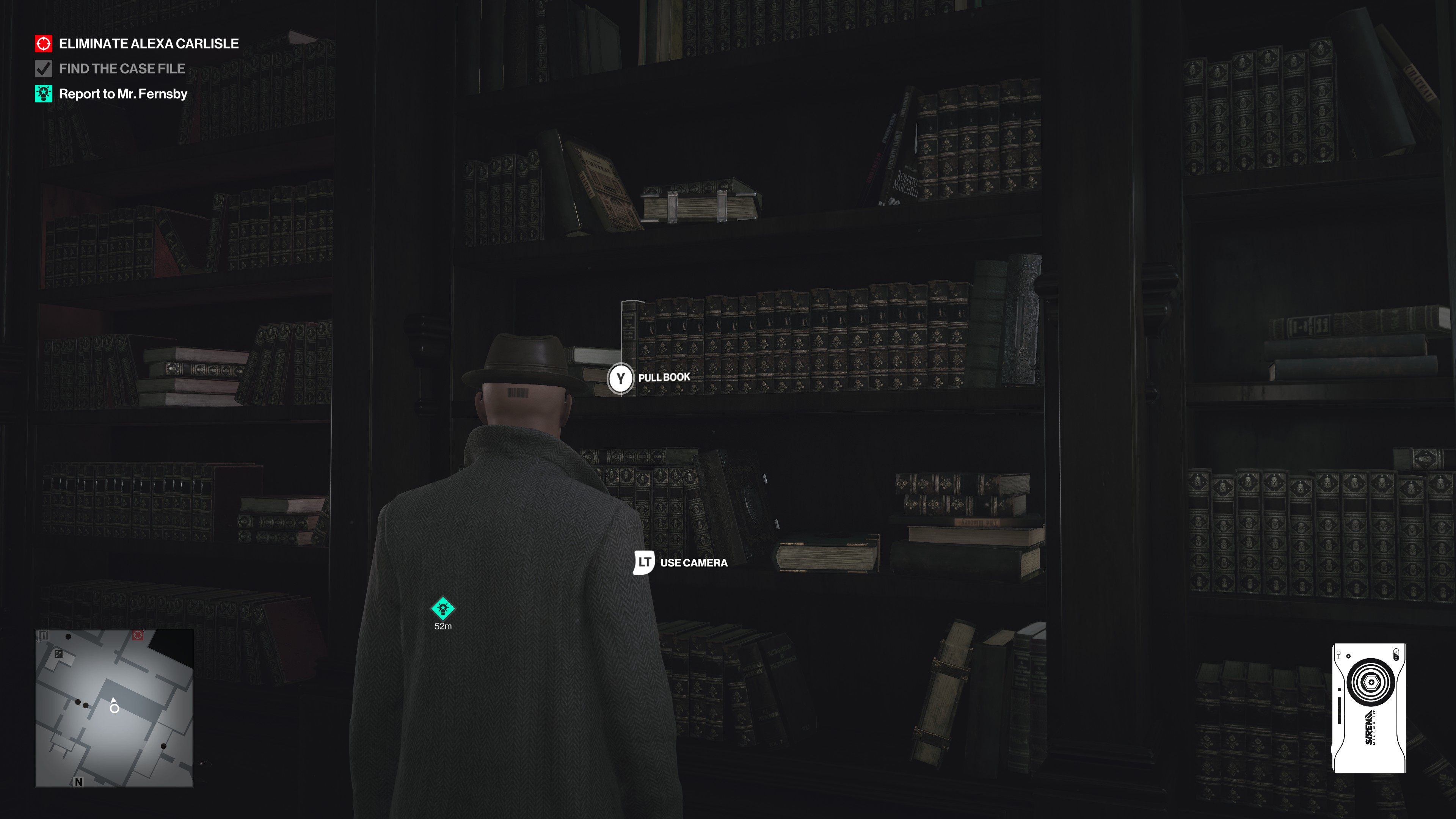 Some of the clues in this bedroom are obvious - but let's quickly run down them, as they're easy to miss. The clues in Zachary's Bedroom are as follows:

That's all six clues in the bedroom! Now, it's time to move on to some questioning...

As will be suggested, your next port of call should probably be to talk to each of the people who were present at the house around the time the murder took place. Each has an alibi, and we'll be able to check that out later. That means that once you've been given the case, you should find and speak to the following:

These characters are listed in the order that they appear in Hitman 3's menu, but you can approach them in whatever order you like. Talking to each first will give you their base alibi for the night of the murder - and this is something we can then check for each character against both the testimony of the others and the other evidence we'll go on to uncover. 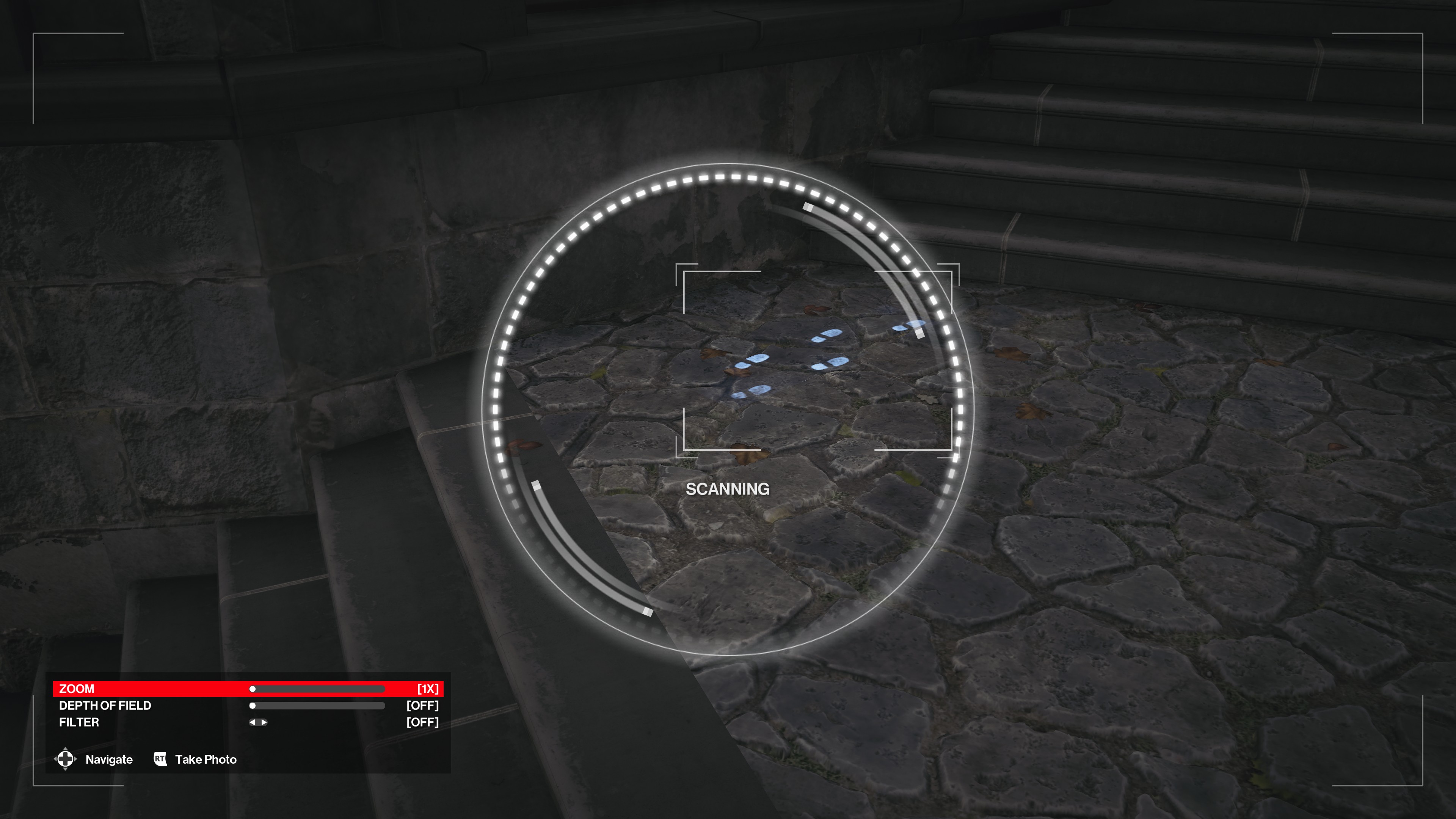 Once everybody has been questioned, you can then begin to work through confirming those alibis to eliminate certain people from your enquiries into Zachary's murder. Some of the Carlisle family will also back each other up, helping to part-confirm some alibis off the bat, which is why it's helpful to speak to them all first.

Next, however, there are some people you can question & actions you can perform to help confirm various alibis:

With this evidence gathered, it's time to visit the key locations relating to the Death in the Family locked door murder - and really whittle down who is responsible for this death in the family...

If you've just spoken to Rosie the Maid as suggested above, you'll be quite close to Mr. Fernsby's Office. You'll need a lockpick or a crowbar to get inside. You can bring a lockpick to the mission, or you can find a crowbar outside, either near the kitchen supply delivery that's ongoing or behind the greenhouse. You can easily break in, as this is a secluded area. You won't be disturbed, either, so don't panic.

Inside the office, there are three key clues you need to pick up:

Once you've found all three, you'll know where Mr. Fernsby stands... and have options. This opens up one potential ending to this storyline. Before you leave, take the Mansion Master Key from one of the shelves by the fireplace. This will help to get us everywhere else we need to go.

The Greenhouse: both clues

Since we're already close to the garden, leave Mr. Fernsby's Office and head down to the gardens, where there's a large greenhouse at the other end. You can't miss it. The doors are locked, but carefully get into the Greenhouse when nobody is looking. It's not a restricted area, so you can be seen in there - just not opening the locked door.

Once inside, there's two things to find. Both are quite obvious, but for posterity... 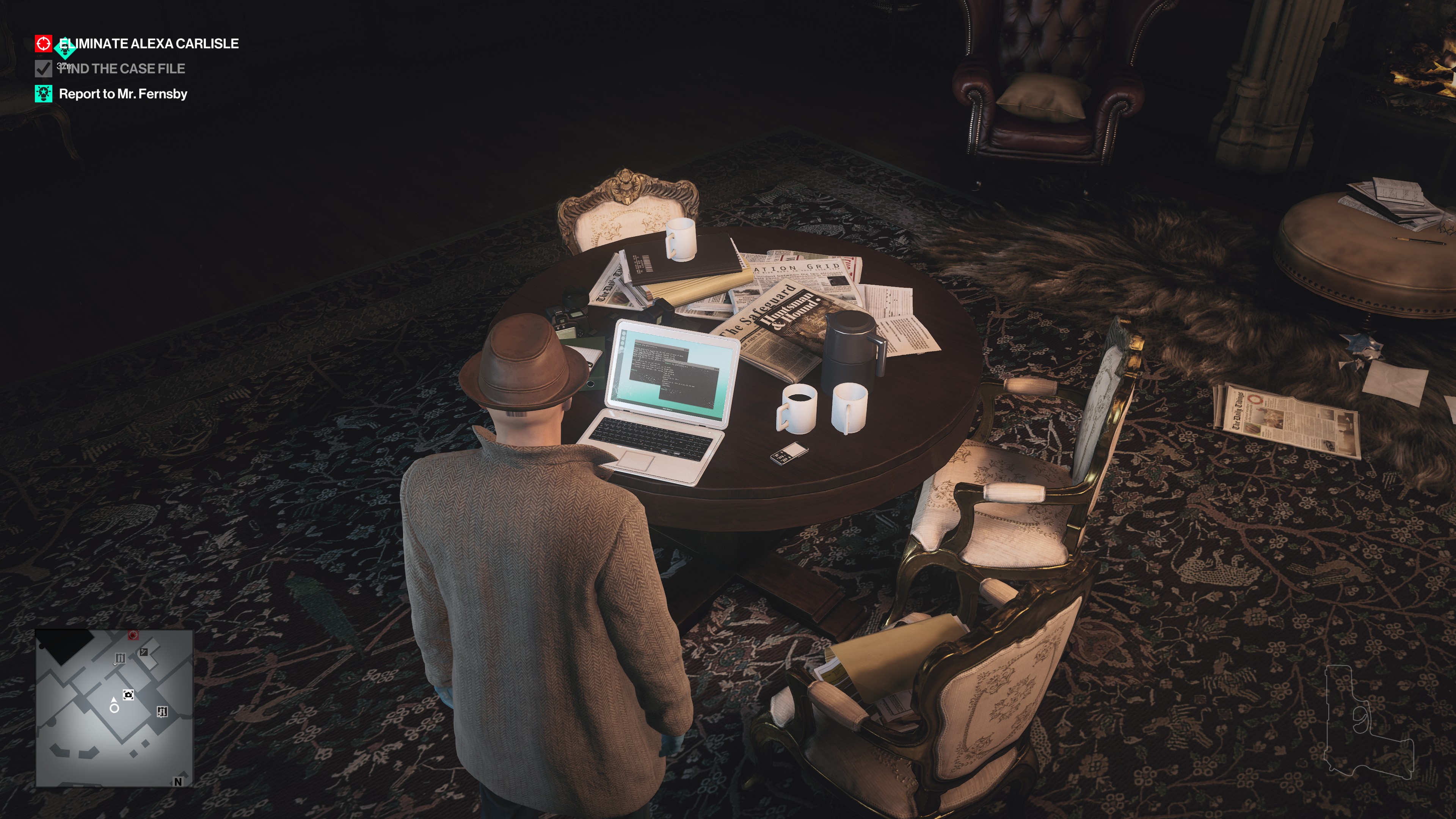 Head back to the mansion, and go upstairs to the bottom-right room on the first floor. This is Rebecca's room. There's a couple of items you'll want to check in here to help confirm or debunk her alibi:

There is a secret room attached to Rebecca's Room, accessed by tweaking a painting, but it's not relevant to the Death in the Family murder case.

Next up, cross the mansion and go to the room of Emma and Gregory - in the opposite corner to Rebecca, the top left of the in-game map. There are four clues to find in here, all of them crucial:

All of the information up to this point should unlock another potential ending to this storyline, though there is one more thing you can do... 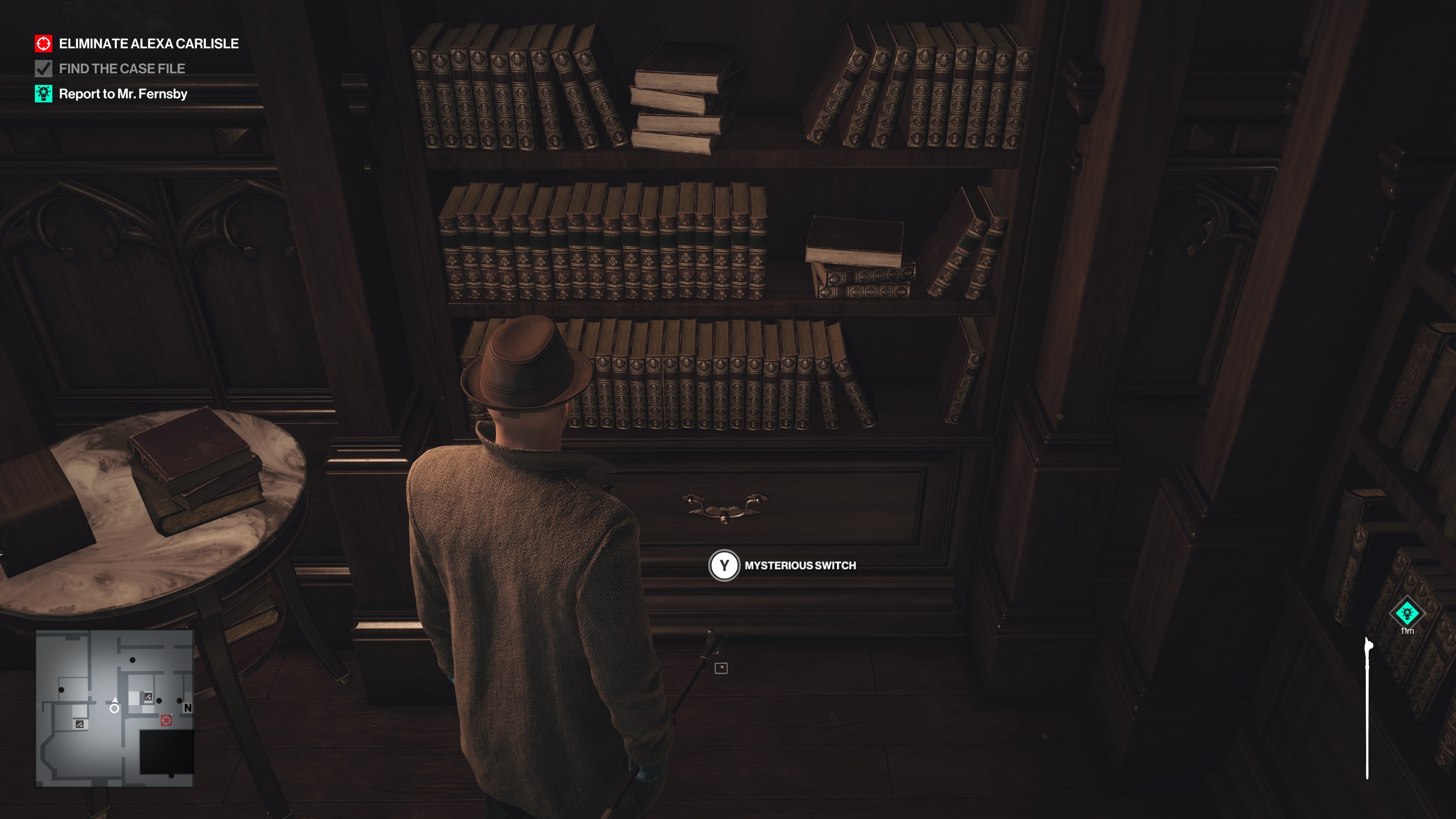 In the corner of the bottom-left room of the first floor, there's a radio on a table. Look in the corner past this radio and you'll find there's a spot on the floor. Bring the Bulldog Cane with you here and you can press it into a gap in the floor to open a door to a secret room. It's worth noting the cane can also be used to access the secret room attached to Zachary's Room.

Inside you'll find one last key item, Montgomery's Long Lost Letter. This will unlock a third and final conclusion to this storyline. 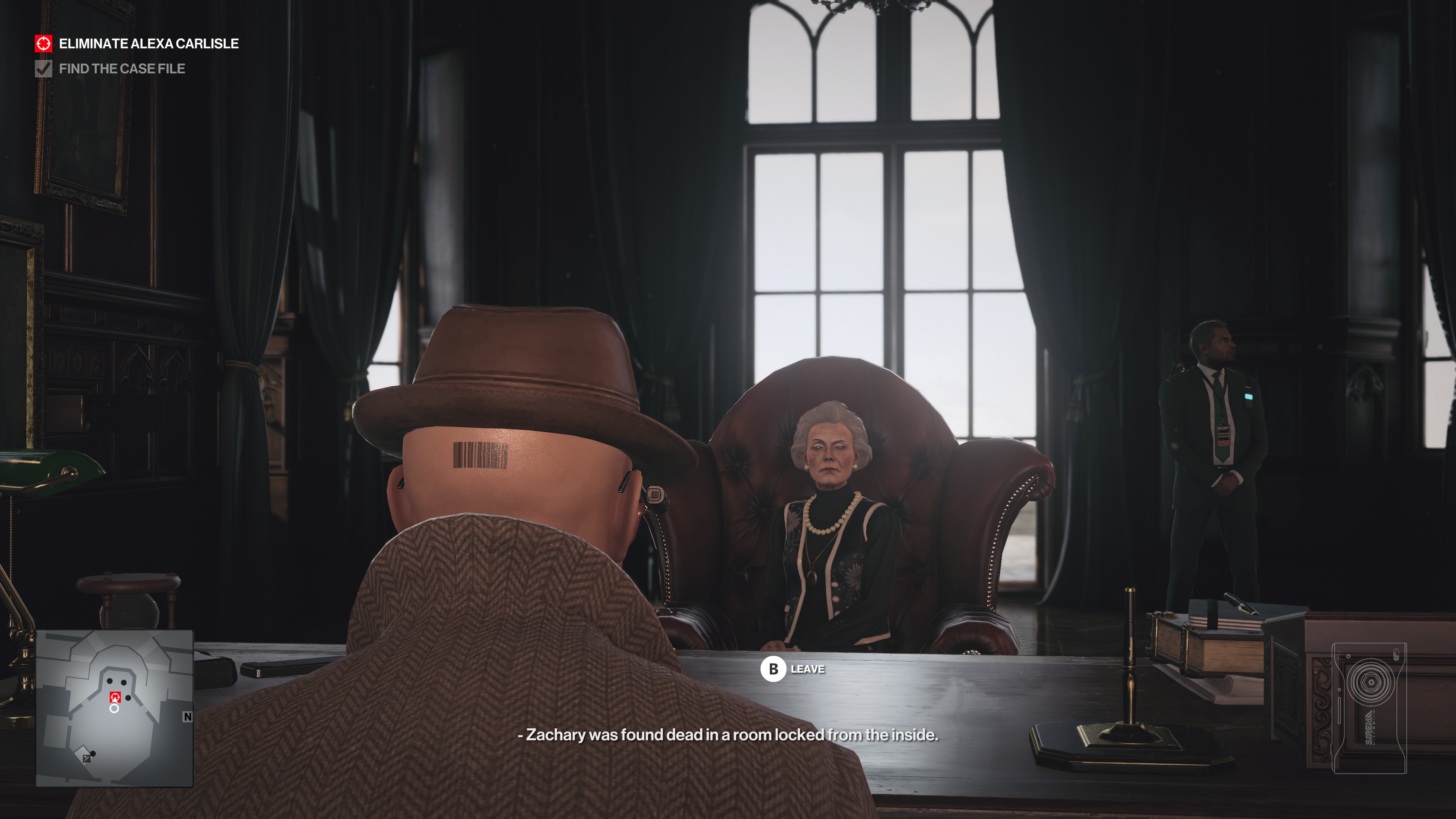 If you've followed all of the above, you'll unlock some achievements/trophies and mission feats for clearing house, revealing all of the clues that the Dartmoor Mansion has to hold. All that remains is for you to approach Mr. Fernsby, who will then take you upstairs to Alexa Carlisle to report your findings.

You can tell her the truth of who committed the murder, which should be obvious to you at this stage, or you can tell one of two elaborate, evidence-backed lies which might be more helpful to your cause. Each has a unique reaction, and some might be more helpful to your mission than others. Some outcomes will make it easier to complete your mission to take out Alexa, while completing the objective in general will let you get the case file without puzzling out Alexa's safe code. Consider saving and reloading to see them all!