You’d never think it, but in the hands of a certain slaphead assassin, a blueberry muffin can be deadly. Hell, Agent 47 is such an effortlessly inventive executioner at this point, I’m pretty sure he could murder a room of goons armed with no more than a Toblerone and a toothpick.

Seven games in, it’s reassuring to see IO Interactive hasn’t lost its knack for whisking up ingenious contract kills. Take that muffin murder. After infiltrating a sleepy slice of suburbia – which plays out like a much larger, multi-layered version of Hitman: Blood Money’s ‘A New Life’ – I actually use this banal baked good as a key cog in a homicidal plot.

First, I creep up on a poor pest control worker, then choke him out from the safety of some bushes. Next, I head to the heavily surveilled home of my reclusive contract, convince his head of security to let me deal with those pesky mole hills in the back garden, before using the spongy little cake to clog one of said burrows. This lures the crotchety Janus from his home, with the frail curmudgeon thanking my mysterious mole man for an “unorthodox” job well done.

"Though the action is almost mechanically identical to 2016’s episodic hits, 47 still has enough murderous imagination to keep you hooked"

By this point, I’m standing well back, because that hole doesn’t just contain a stodgy pastry, it also houses a powerful ICA remote explosive. BOOM! No more Janus.

While it can often feel like a glorified expansion for its predecessor, there’s no denying Hitman 2 delivers killer thrills. Though the action is almost mechanically identical to 2016’s episodic hits – conversely, the sequel launches as a fully formed package – 47 still has enough murderous imagination to keep you hooked. Even if you know the last game’s sensational Sapienza like the back of your murderer’s gloves, these eclectic assassinations still surprise (and sicken) at every turn.

Once again there’s a semblance of a connected story between each of these sociopathic sandboxes, and predictably, it’s utter nonsense. A befuddling yarn about bringing down the shadowy organisation that cloned 47, it’s confusingly told through cheap, partially animated cutscenes. The final result looks like a thrown together kid’s flipbook, not the sort of slick cinematic production you expect from a triple-A game in 2018.

Of course, the stories that really matter in Hitman 2 aren’t the ones told through crummy CG. Instead, they’re the ones you help tell minute-to-minute, as 47 prowls around these compact, crime-ridden worlds; devious schemes and slaughter the only thoughts in the assassin’s shiny head.

The opening Hawke’s Bay level – a moody intro set on a moonlit, windswept beach – gives you a perfectly formed little sandbox to pop your contract-killing cherry. IO elegantly presents a range of options with which to whack a dastardly socialite, then invites 47 to rub her out in any way you see fit.

Spike her Scotch, then smother the target during her sauced-up slumber. Set off the alarms, force the schemer into her disgustingly trendy beach house’s panic room, before shooting her through the skylight. Hell, you can even fling a screwdriver at her cranium if you’re running low on assassin inspiration.

As the remaining five, much grander maps open up, so do opportunities for increasingly creative kills. Kick a racecar driver down an exposed elevator shaft while dressed as a fluffy pink flamingo during the awesome The Finish Line Miami-based mission – more on that in a bit. Dress up as a famed painter so you can trick a sleazy Bollywood mogul to pose within the sniper sights of a much lesser rival hitman, saving 47 some wetwork. Lift the curse from a Colombian building site, then immediately off the money-grabbing forewoman courtesy of a cement mixer. Assassinating ‘accidents’ don’t come any sweeter.

Back to Miami. What. A. Map. This sunkissed slaughterhouse, which centres around an F1 style event, is an all-time series great. Deftly mixing slapstick, hi-octane chaos – poisoned coconut balls star in one scenario – with a creepy sideline in robot-assisted homicide, it’s the equal of Sapienza.

The five larger levels all demand three or four playthroughs, minimum. Like the last game, each map has six or so mission stories to follow and complete that set the framework for the game’s headline operatic kills – some of which are highlighted above. Commit to each map like you really should, and Hitman 2 could easily last you upwards of 20 hours. 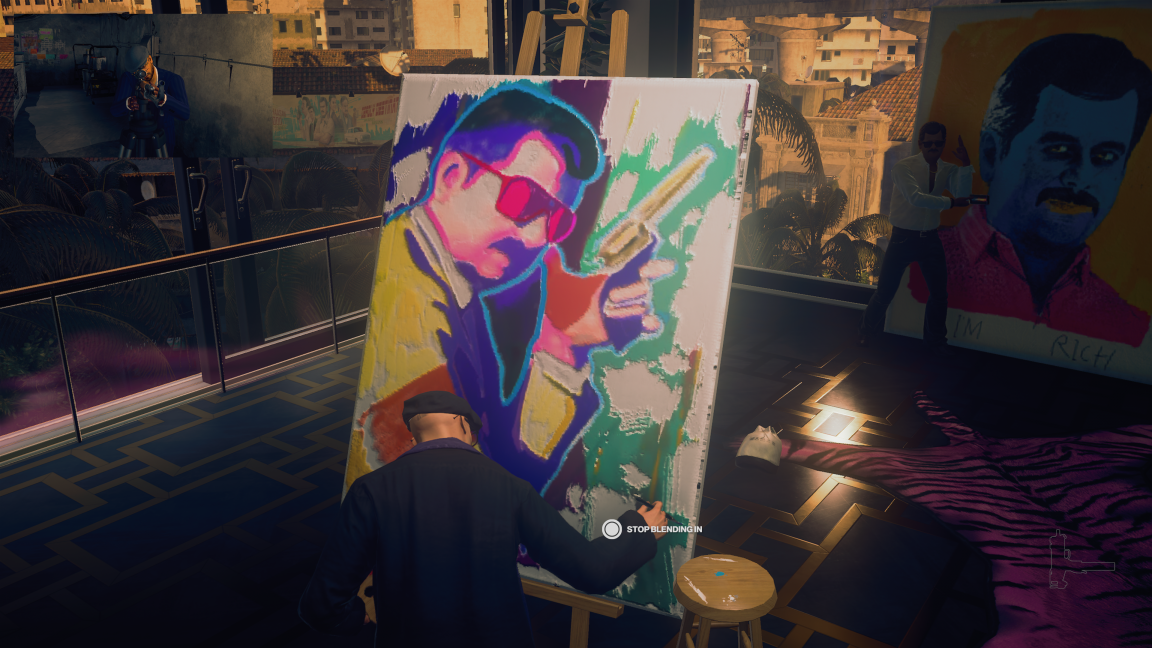 "Hitman 2 also gives you more agency than its predecessor; often providing only vague clues of how to, say, snatch that key dagger from under a room full of guards’ noses. In this respect, it feels less like a game of super murdery Simon Says than 2016’s reboot"

I also prefer the returning hints system this time round. On the default settings, it’s true you’re still given the broad beats of where to go and what items to look out for to perform hits. Yet Hitman 2 also gives you more agency than its predecessor; often providing only vague clues of how to, say, snatch that key dagger from under a room full of guards’ noses. In this respect, it feels less like a game of super murdery Simon Says than 2016’s reboot.

Spin-off mode Sniper Challenge also returns with another well crafted map, this one centred around an opulent German palace. Even though 47 is still firmly rooted to the same spot, there’s plenty of scope for devious hits; be it concealing bodies by ensuring they land in pools, or sniping a canister to end the glitzy gathering with a bloody bang. It’s a slick, addictive little diversion.

As for the new Ghosts mode, Hitman 2’s spin on PvP isn’t live at time of writing. The core idea is certainly promising, though. Pitting you and another player on two versions of the same map, you both start off as 47, and must identify and eliminate randomly generated targets while picking up killing tools and costumes along the way. First to five hits win, with the added twist that witnessed kills don’t add to your total. Here’s hoping the execution matches the initial intrigue.

Throw in upcoming Elusive Target events – I can’t wait for my one shot to murder Ned Stark in the face – and Hitman 2’s already killer package could be that much deadlier in a few weeks time. 47 may not have mechanically moved on much since last we saw him, but when he’s this deadly with a muffin, I’m not going to grumble.