In Fallout 76, conflict between players needs to be mutual, otherwise you will face the consequences.

If you engage someone in Fallout 76, they have to fire back for it to be classed as a legal kill. If they don’t fire back and you kill them, you become a wanted murderer. As a murderer, you are visible on the map to everyone, you can’t see anyone else on the map, and even your teammates can legally kill you. And they will.

Players will hunt you down because you have a cap bounty on your head. The bounty, by the way, comes out of your cap collection. You can’t game the system by having no caps, either.

If you become a murderer with a small amount of caps, you will instead be hit with a massive debuff. 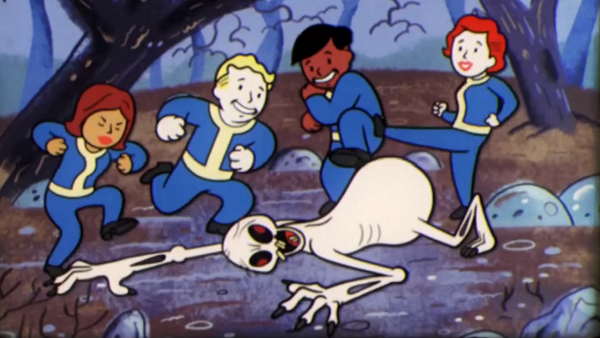 “You lose whatever caps you have, down to zero, and you take a debuff that reduces the amount of damage you do to everything,” Bethesda VP of marketing Pete Hines explained during a recent roundtable. “Both other players and PvE. So you are now far less dangerous to everything as a penalty.”

You can’t bypass this by logging out, either. The penalty sticks around for a couple of hours and only ticks down during actual playtime.

“For two hours in the game, you’re going to be spitting spitballs at enemies to remind you that you’re a murderer,” Hines said. “Remember, we speak about murder as you killing someone who didn’t want to fight and wasn’t interested in engaging, not you fired at me, I fired at you, we both wanted to do this.

“It’s specifically to stop people doing this where it’s negative and one-sided. It’s meant to not be fun - you will do far less damage with anything you use for a period of time.”