The Bureau: XCOM Declassified has strategy fans in a cold sweat over whether or not 2K Marin can deliver a tactical experience. VG247's Dave Cook talks with the studio to get some clear answers.

Developed by BioShock 2 studio 2K Marin, The Bureau: XCOM Declassified is a third-person adaptation of the classic series created by Julian Gollop.

You can check out a video of 2K Marin's Alyssa Finley talking about The Bureau's world and setting here.

We've also got a batch of The Bureau screens here, showing off the game's tactical play, squad members and aliens in action.

There's also a gameplay trailer that gives you an idea of how The Bureau works in practice.

First announced back in June 2010, 2K Marin's first-person take on the XCOM franchise was met with a mixed reaction among gamers and the press.

On its surface the project appeared to be a shooter with some wafer-thin squad mechanics and none of the base-building or strategic elements that put Julian Gollop's original game on the map. It got a lot of people concerned.

I saw the game behind closed doors at E3 2011 and it seemed to be a solid shooter with a dark tone. While it gave fresh insight into the birth of the XCOM task force from a 'boots on the ground' perspective, what I saw certainly wasn't tactical.

The game fell into obscurity shortly after its E3 showing. 2K Games then stopped pushing out trailers and screenshots, which sparked rumours that the publisher has quietly cancelled the project. It seemed no one could get a clear answer on the matter.

However, the project re-emerged once more as The Bureau: XCOM Declassified, and the press train is firmly back on the rails. Speculation about why the game disappeared quickly followed, and the old concerns about the shooter's tactical elements still continue to this day.

I approached 2K Marin and offered the team a chance to set the record straight, and to explain just how tactical The Bureau really is. Creative director Morgan Gray was more than happy to discuss these concerns and to speak freely about the game's tactical nuances that you haven't yet seen in action. 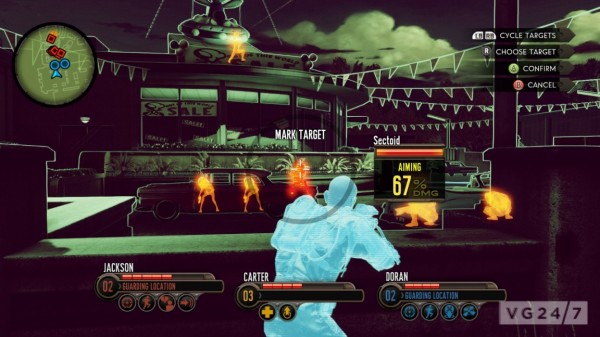 "At its heart the game is about tactical squad combat," Gray explained, "being that battlefield leader out in the field of action, and then using leapfrog tactics, coordinating fire, assessing flanks, pressing your initiative and advantage based off the opportunities that you create.

"I think as more gameplay videos come out and people see this in motion I think the misconceptions are going to give way. Screenshots don't really do the game justice in telling the whole story. I think the industry itself and the player base is forgetting that for every Call of Duty and Halo there's a Rainbow Six, a Brothers in Arms, or a Full Spectrum Warrior. Third-person games aren't all action and bombastic Hollywood blockbusters."

Indeed, 2K Marin is full of XCOM fans, and there is a desire across the board to make The Bureau as tactical as possible without breaking the game's flow. It isn't a turn-based game, but as Gray explained, early play-testers who tried to run and gun missions found themselves dead and slightly embarrassed in a matter of moments. This is certainly not Call of Duty.

I asked Gray to explain how a typical battle in The Bureau might play out, and how the underlying tactical mechanics will help drive strategic thinking in players. He explained that each battle will see XCOM agent William Carter and his squad facing off against an assortment of aliens that fans will be familiar with, each bearing nuances and behavioural patterns that demand on-fly-decision making. 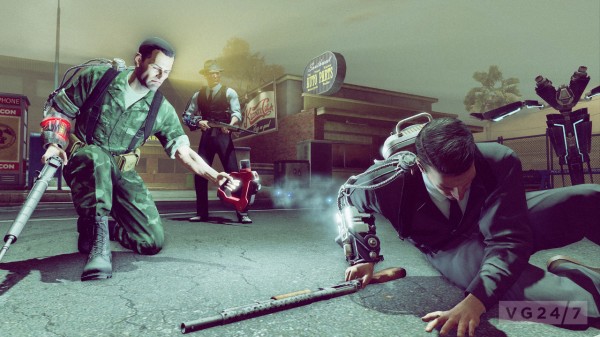 The example given involved the squad venturing into an evacuated city in New Mexico and facing off against a pack of Sectoid slaves. Gray explained that each encounter will open with some time to properly evaluate the battlefield before heading towards what 2K Marin refers to as the 'anchor', which is that first piece of viable cover to hunker down behind before springing an attack.

"The player team will move into cover really quick," Gray continued, "and as they move into cover they're going to survey the battlefield. In The Bureau it's not just set in big hallways or rooms, but the battlefield itself is part of solving the combat 'puzzle'. Our fights aren't 100% gated like, 'do this and you'll win', but they are a bit of a puzzle in how to use your powers and guys to the best of your advantage.

"After surveying the terrain, players will move their agents into whatever position feels appropriate, most likely keeping [Carter] on one flank, and two agents together on the other flank. Then you will bring up 'Battle Focus' - the interface that allows you real-time tactical control - just to analyse your power sets.

"Say the player has brought along a Commando and an Engineer class-type; the Commando specialises in taunting enemies, uses really aggressive powers and is tougher with more health. He would most likely throw up a taunt ability to pull aggro so that aliens will get mad at him and move away from cover. The Engineer could then lay down a turret, while [Carter] can fire the first shot from a third-person perspective from behind cover and then the battle is on." 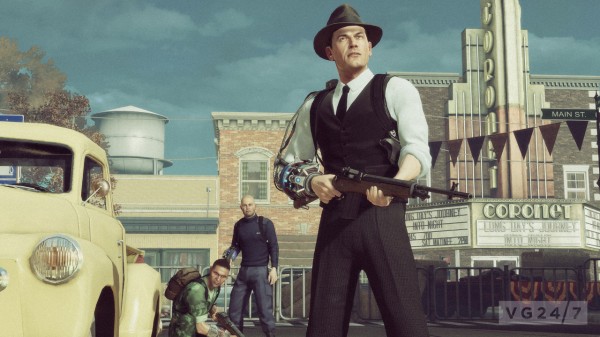 From that point onwards the battle becomes unpredictable, forcing players to respond to the way aliens react. Gray explained that his team wanted to engage both strategy and twitch fans, offering a fluid action experience without compromising the game's strategic framework.

He likened The Bureau's myriad mechanics to the studio's work on BioShock 2, and how its many Plasmids, weapons and devices made for diverse combat scenarios. In XCOM you have different weapons, strategic 'puzzles' to overcome, gadgets to equip and class skills to unleash. It's up to the player to decide how-best to use the tools at their disposal.

Gray explained that Fallout 3 has been a huge source of inspiration for 2K Marin, and he added that Bethesda's successful transition of isometric strategy to first-person RPG showed the studio that XCOM could make the same leap if handled with care. Where Fallout 3 bridged the gap between action and strategy using V.A.T.S., The Bureau's Battle Focus view performs a similar function.

While combat is a large part of XCOM's make-up, base-building, squad recruitment and research are equally as important. Agents can still gather resources and alien materials, but players will not be able to actively build their headquarters as they go. I asked Gray how the these key series elements transferred into The Bureau's ambitious patchwork of ideas.

"The base is a big prominent gameplay mechanic," Gray explained. "It's your social hub, you'll go back to it, you'll be recruiting agents from it. There's interaction and conversations; a considerable amount of gameplay in the base itself, because we figured if we're telling the origin story of XCOM it all pretty much starts with an underground base. It's a character in itself and has a progression throughout the experience." 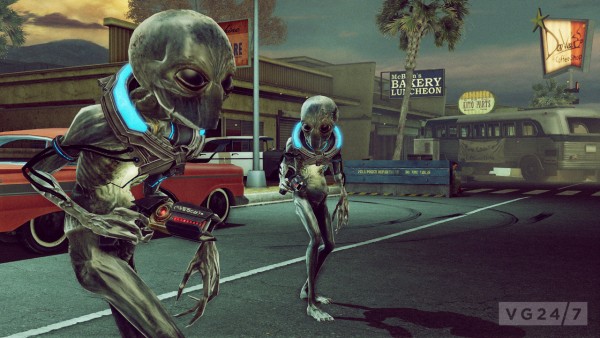 Gray likened the XCOM base to Mass Effect's Normandy due to the interaction and content at hand. Turning to research, he continued, "Research was a tough one for us because when we were talking about what we would translate to classic XCOM into our expression, we actually realised that being 100% accurate in trying to translate everything would be wrong.

"In Enemy Unknown or classic XCOM it was a great game mechanic because you had a concept of time in which research is conducted, and a strategic layer due to procedurally-generated content. Players could farm missions until the next big mission that moved the plot.

"Although we have an RPG campaign structure we don't have procedurally-generated content, which is also neat because every mission you go on is propelling the game towards its finale - be it a primary or secondary quest. The concept that the clock always ticking often comes up in our game."

It makes sense that waiting four days of game time for a batch of medi-kits to be constructed in the XCOM lab would get in the way of the game's constantly flowing narrative, and the overall mission structure at hand. Instead the advancement of the team's base technology and resources will be woven into the narrative in a tangible manner.

Gray stressed that the classic XCOM method of research is applicable to a specific genre, and couldn't be shoe-horned into 2K Marin's new design wholesale. Instead of researching gadgets at the HQ, new tech and objects can be found in the world and once acquired they can be used at the time, or stockpiled and assigned to agents later.

The final format felt more immediate to the team, and Gray revealed there was a lot of debate and brainstorming around the concept until a ultimate form was rested upon. While playing around with mechanics that fell closer to the classic XCOM research trees, the developer felt it removed a lot of the game's tension and broke the flow of its narrative.

After speaking with Gray it's clear that The Bureau: XCOM Declassified is still a tactical game. He recalled what he called 'the learning moment', in which new players were gunned down by not thinking tactically, and only then could they understand that they had to think laterally rather than approach the game like a corridor shooter.

With classic features like perma-death, research, strategic powers and agent management, it'd be remiss to say The Bureau stabs its forebears in the back. If Fallout 3 can happily make the leap from an isometric to third-person perspective, why can't 2K Marin's project? We'll have to see more of the tactical elements running to get a clearer view, but for now I'm filled with optimism for the end product.

How about you? Does The Bureau seem like a solid attempt at a third-person XCOM game, or are you still wary?

The Bureau: XCOM Declassified launches on PC, PS3 and Xbox 360 from August 20.