When you pay an influencer or streamer to promote your game, make sure they don't play it like a "fucking moron".

That's the brutal advice from one of the developers of Everspace, Michael Schade, who revealed Rockfish Games had paid up to 5,000 euros per hour for a pro streamer only for it to backfire very publicly.

"Those guys are really serious about this. But the worst thing that can happen is somebody with a lot of followers is just shit at playing the game. We had that. Actually it was an influencer we'd paid for," Schade reveals.

An agency will suggest a number of streamers, YouTubers or influencers to play a developer's game based on their interests, but it's crucial that the developer pays close attention to their previous streams.

Of the 20 YouTubers/Influencers paid to play Everspace, only "3 or 5 of them have worked out".

"The rest was okay, or a disaster," Schade says. "Streamers are way more expensive. The most expensive stream, we paid 5,000 (euros) per hour and we had to book him for two hours. Actually his opening line was 'I have to stop playing Destiny 2 now because I'm on a sponsored stream to play a space game and I don't like space games'.

"And he played like a complete moron… a fucking moron. 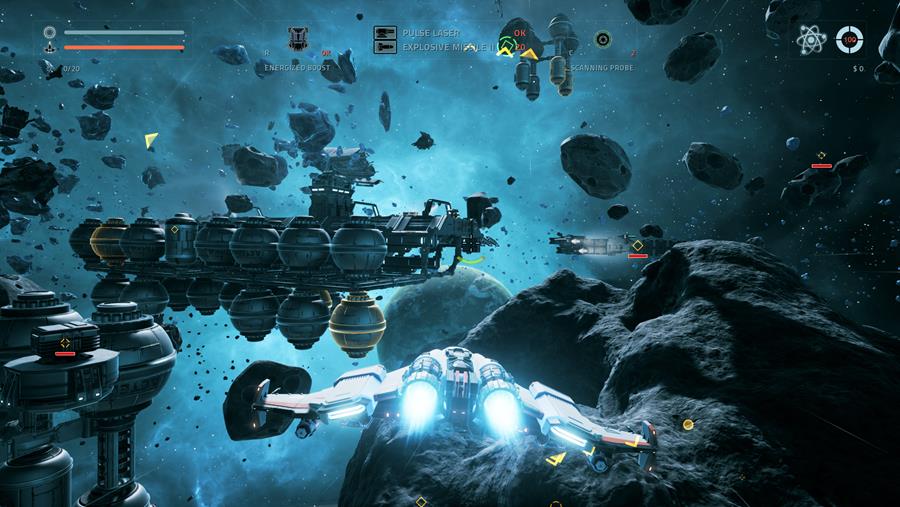 "I blame the agency. They need to figure it out. Working with agencies and influencers is so new and takes so much time and effort into it. If you pick the right one, it's fine.

"Before you make a decision on pricing, I recommend you watch those videos and see if he or she is really good at playing a game. If they're not good at playing the game we don't want to have coverage. You have to pick very carefully. The next time we work with an influencer we're going to make sure they are really good at a 3D space game otherwise we're not going to do this."

Regardless of the negativity, Everspace has had incredible success by manipulating social media, its community, Reddit, the Steam homepage, and finding the right Twitch streamers and YouTubers to push the sci-fi space rogue-like.

But it comes at a cost, with Schade revealing the highs and lows in a packed session today at Reboot Develop.

Everspace pays smaller Twitch streamers to play the game and sees a better return from that rather than supporting the bigger influencer names, which have either used Everspace for their own agenda, or been terrible at playing it.

Schade said that no matter how "awesome" some YouTubers can be, it's important to step back when a negative stream or video goes viral, such as TotalBiscuit's WTF is Everspace.

"They don't like to be lectured by the developer," he said of YouTubers. "We were like 'awesome, TotalBiscuit is featuring us.' Well, he didn't like the game at all."

The video and discussion about the review went viral on Reddit and Steam, but Schade "just let it go". "Don't interfere," he said. "Enjoy the extra free traffic. Feed the trolls.

Schade revealed how it's easy to bend the truth through social media, suggesting to your audience that things are more popular than they first appear. He put that into practice last weekend at London indie show Rezzed: "I took a picture and came up with this copyline: 'so many sci-fi FPS space enthusiasts waiting in line to play Everspace'. Which is bullshit, probably because not one of those guys knew what was going to be in there.

So many #scifi #spacegame enthusiasts waiting in line to play #Everspace on #PS4 at the @UnrealEngine booth at @EGX #rezzed2018! Pre-order will start very soon! :) #indiedev pic.twitter.com/esxs8XQkxO

Poking the hornets' nest was a theme for Everspace's marketing, with Schade admitting a little conflict can help your game get attention.

"Feed the trolls. The trolls are your best marketing friends," he explains. "In many cases they come up with things either they haven't thought through, or it's provocative, but it generally fuels the discussion. It means more traffic and more traffic means more visibility on platforms that are based on traffic."

"If your game is not on Reddit, your game does not have a life," he adds, where members created a subreddit for Everspace, creating "the most effective marketing we've ever had" with one gif that did 3 million views "within a day or two".

"You need to be very modest. If someone from the community picks it up then you should be ready to answer questions."

It also benefited from the support of a newsletter from Chris Robert's Star Citizen, which drove 2,000 Star Citizen backers to back Everspace on Kickstarter.