The Elder Scrolls isn’t exactly subtle when it takes influences from other pieces of Tolkien-esque fantasy. But writing off the latest adventure as a light-hearted reference might be selling it a little short.

According to claims, paragraphs of text in Elsweyr seem to have been lifted straight from a 2016 D&D adventure, Paige Leitman and Ben Heisler’s The Black Road. After only a day online, Elsweyr was canned.

We’ll let you be the judge. Take this paragraph from The Black Road, for example:

“Through various means, it has been arranged that you would meet Azam the caravaneer in the large, Calimshan-styled tent that passes for a tavern here. A pair of tieflings, who seem to be unaffected by the heat, eye approaching visitors warily. The dim interior of the tent is a relief from the bright light and wind, though it’s as hot here as anywhere else.”

And then there's Elsweyr...

“In various ways, it is arranged that a group of adventurers would get acquainted with the caravan leader named Kar'reem. His big tent is filled with several Khajiit, which seem unaffected by the heat, they stare at you cautiously. The dim interior of the tent is a relief compared to the bright sunlight from outside, even though it is still as hot inside as out there.” 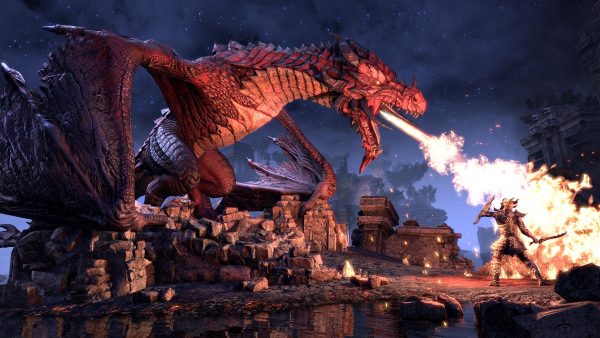 Beyond words, everything from the setup to scenarios to the exact make-up of a travelling caravan seems to have been pinched from the D&D module. It was blatant enough that sword-and-sorcery fans couldn't help but notice.

“Hey, The Elder Scrolls Online, would you please let your legal team know?” Leitman wrote. “This is REALLY not cool."

A spokesperson for Bethesda told Ars Technica that the company was looking into the similarities.

"We’re digging in deeper to figure out what happened, but in the meantime, we’ve pulled the adventure based on what has been brought to light."

Elsweyr was intended as a promo for The Elder Scrolls Online: Elsweyr coming this June. Hopefully, for Bethesda, any publicity is still good publicity.