Going into a David Cage game in 2018 without some expectations is impossible. Love them or loathe them, Cage's games have a distinct style and that means we come to expect certain things, things that are all part of Detroit: Become Human.

Detroit and developer Quantic Dream may have had bad press already, focused on the game's content and alleged working conditions at the studio, but none of that means Detroit has to be a bad game. Anything is possible and I always welcome surprises. But the greatest surprise isn't that Detroit fails to deliver a good story, it's that it's one hell of a boring game.

Like the studio's previous titles this is a cinematic adventure built around context sensitive action and dialogue choices. Detroit is about a future where androids are used as a slave workforce and their slow revolt against humanity. The game seems way more interested in the first part with entire sections involving nothing but doing mundane actions as prompted on screen. There's even an entire level where you just clean a house.

You play as three androids. Connor, a detective who is dispatched to deal with crimes relating to his fellow robotic kind. He gets partnered up with a washed up veteran detective who, you guessed it, hates androids. There's Kara, who's owned by an abusive father named Todd whose daughter, Alice, she looks after. Eventually they end up on the run and Kara has to do her best for the child. Then finally there's Markus, a caretaker for an ageing artist. His story has the biggest arc, with him eventually going on to join the android resistance. For the most part the slices of their lives you get to play are small scale, relatively low stakes sequences, which is quite a nice change of pace from most videogames, especially big budget ones. Each one of these stories is full of promise even if they're derivative.

"Entire hours go by as you follow prompts on screen, doing chores or moving objects, the most mundane tasks imaginable. No shocking discoveries, no character insights, just banality"

Sadly the game does almost nothing with them. Entire hours go by as you follow prompts on screen, doing chores or moving objects, the most mundane tasks imaginable. No shocking discoveries, no character insights, just banality. When a game like Gone Home, with a mere fraction of the budget, can make rummaging through a house emotionally engaging, even moving, then it's an utter waste Detroit does nothing with these opportunities.

Instead it leaves all its storytelling to heavy handed exposition. How do we know about the background of this father? He tells you. How do we know this artist feels past his prime? He tells you. Even then most characters don't even give any exposition at all so they're left as these thin archetypes whose personality you can outline a mile away. The performances throughout elevate several characters - Clancy Brown as the veteran cop is a particular highlight, and his relationship with Connor becomes one of the game's most endearing. Despite that they're bumping up against a script that just has them explaining what the player already knows, hinting at backstory squarely on the nose. In spite of the game's excellent motion capture and talented cast, these characters never feel like real people.

The game isn't all chores. The opening involving a hostage negotiation is a taste of later, larger sequences, where the game's cinematic ambitions are on full display - though failure is ultimately impossible, so any tension is minimal. Connor's detective parts are easily the games most engaging sequences simply because there's more to do. But even these parts are undermined by one of the game's main issues: it doesn't know how to use choice.

Choice in videogames is a tough one. How to make players feel involved and give them agency while also being realistic about just how much freedom you can actually give them. Sometimes even really linear choices can feel compelling. While there's many things that have to go into making choices meaningful, nothing feels as vital to me as ambiguity. That's something Detroit betrays constantly. With its' percentages and pop-ups, the UI feeds you a constant measure of success as you discover clues or information. Then it wraps up each segment with a little flowchart showing how things could have diverged. There's barely any tension, and you'll not be left mulling over choices because the game makes it all too explicit how to get to each outcome. Plus, if you want, you can rewind each sequence and alter the outcome right there and then. 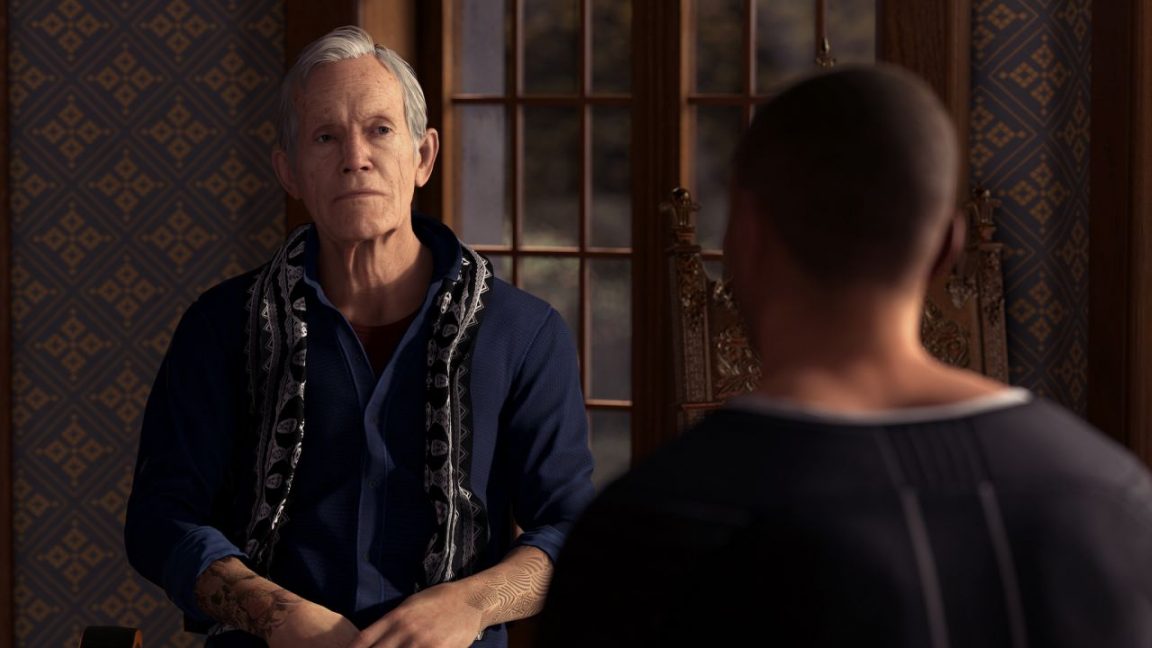 Not that it matters when the game makes everything so obvious in the telling. The abusive father Kara gets lumped with is so obviously a bad guy; he's rude, he's ugly, blatantly hinting at his own bad behaviour. The same goes for the son of the artist Markus is looking after. The instant he appears on screen, he twitches and swaggers, acting obnoxious. I was left waiting only for the moment to confront these characters and move on, not at all involved in anything beforehand. There's no nuance, no exploration of these people. How did this son end up like this? How does such a poor family afford a state of the art android anyway? Detroit doesn't want you to think about this stuff, it just wants you to get busy doing chores on the way to the next expensive cutscene with sad music. Which makes Kara's storyline stick out like a sore thumb. It tackles a really unpleasant subject matter with absolutely no interest in exploring it, so its presence feels like cheap shock value.

State of the art production is wasted on a game with such lazy storytelling. The kind of details that really catch the eye are water being scattered from a swimming pool as a chopper hovers above, or raindrops gathering on someone's face. There's atmosphere in its spaces too, especially the gloomy detective sections with Connor. Every inch of the game just oozes detail and shows that regardless of its ability at storytelling, Quantic Dream are technical masters.

"Detroit is so caught up in trying to be a movie, it forgets how to be a videogame. Not once does it tell its story through play"

But that praise only extends to the visual side of the game as the controls leave a lot to be desired. Since everything is contextual the game keeps demanding specific inputs for various activities regardless of how well it even relates to the action in question. A fixed action button would've been preferred. Even worse though, the main input is from the right stick which also controls the camera. It's frustrating trying to rotate the stick to begin an action whilst it tugs the camera away from the point that prompts for said input.

Even the logic of the game's puzzles is so arbitrary. One small section asked me to clean up trash around the house but wouldn't let me take rubbish to the bin, only the bin to the rubbish. Hardly a game breaker, but it shows a definite lack of imagination when approaching even the most basic of obstacles.

There simply is no challenge. With all your choices spelled out, with most of the actions dull and uninteresting and the puzzles so contrived there's nothing to really wrestle with. You walk in a straight line through every sequence to the point that not only does the camera point you in the right direction at all times, you can't even deviate from the path without hitting invisible walls or holographic warnings that you cannot pass.

At first I thought perhaps this was a clever test to see how long it would take players to try defy their 'programming' but every time I tested the boundaries I found that you simply couldn't. Early on, Kara walks past the TV only for the father to spit in rage at her for interrupting his viewing. She apologises and promises not to do it again. I wondered if perhaps this was it, the game throwing me a chance to display some level of disobedience. Nope. An invisible wall now stops you from walking in front of the television. Even after these characters have broken free of their programming in the narrative the walls remain, just labelled differently. It's sort of the perfect encapsulation of how Detroit is so caught up in trying to be a movie, it forgets how to be a videogame. Not once does it tell its story through play.

But even treating it as an interactive movie, you're still coming up against the fact that it would make for a really bad one. Detroit aims for Blade Runner but gives us Chappie. The last few years have thrown up plenty of great science fiction featuring robots that Detroit could have leaned on. Ex Machina and HBO's Westworld at the very least try new ways to ask questions about artificial intelligence. Detroit, however, isn't just asking questions that are ancient in the genre of science fiction, it's asking them badly.

We already know the answer to the issues it raises. Is it cruel to torture sentient beings? Is discrimination bad? It uses androids to highlight ways in which we already treat humans terribly but it doesn't use them to offer any insight of any kind. It references racial discrimination throughout, like with its “androids at the back of the bus” signs and it's frankly an insult to those who endure it in the real world to have it evoked so lazily. None of which is helped by the world building being inconsistent. No Androids signs litter the city but androids already have in-built limits on where they're allowed to go, so why do these signs even exist? There's a deep lack of thought at the heart of Detroit that makes every attempt to draw from history and the real world feel misguided at best, distasteful at worst.

The story never finds its footing, its characters never feel fully realised, and as a game, all you're left with are tiresome quick time events and awkward controls, through linear corridors with tedious puzzles. None of which is new. A David Cage game in 2018 comes with certain expectations and on that front, Detroit is every bit a David Cage game as could be expected. There's no growth from what has been done before by Quantic Dream and the game's best moments only evoke sequences done better in Fahrenheit or Heavy Rain. The biggest crime a piece of media can make is to be boring and Detroit is as guilty as can be.