Chaos Reborn is the working title for XCOM creator Julian Gollop's sequel to his 1985 original Chaos: The Battle of Wizards. Gollop's development blog has been updated with new gameplay and design details that promise to fall in line with the essence of the original game.

The new game is being created in Unity and will launch on iOS, PC and Mac initially. Gollop's latest blog post states that he wants to, "keep the essence of the original game with a few tweaks", revealing that enemy stats will be the same as the original game. Gollop also posted this image to show players what he means: 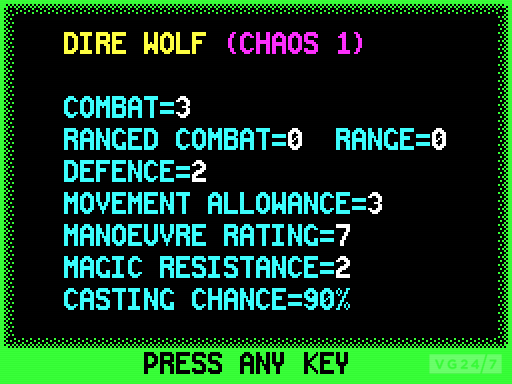 Gollop confirmed that while the original Chaos dictated the outcome of battles by using a simple dice-roll mechanic, the format in Chaos Reborn will follow an odds format that stacks up the likelihood of the player defeating certain creatures based on raw percentages.

On the subject of enemy engagement, Gollop confirmed that players will enter battle by moving next to foes, and that movement will take place on a hexagonal grid that considers movement and attack range.

Creatures can also have special attributes that include these examples:

There is much more to say, but you can check out everything Gollop has revealed over at his blog. Are you excited for Chaos Reborn? Let us know below.