Call of Duty: Black Ops 2 delivers a full zombie campaign. Does it deliver enough substance to merit a look? VG247's Dave Cook buys a return ticket to find out.

As fun as it was, previous instalments of Treyarch's Zombies mode were a 'take it or leave it affair'. Each map require a lot of trial and error and retries to fully understand what you needed to do. You really had to know what doors to open first, which paths to take and have a lot of patience to go far.

It's no secret that Zombies mode is a hit with fans, so it's understandable that Treyarch would want to expand on its formula with a bespoke zombie campaign. It's called Tranzit and it picks up where the events of the final Black Ops expansion 'Rezurrection' left of.

The world is being ravaged by the zombie menace, the streets are being torn up, lava and brimstone bellows through the cracks, and it's up to you to uncover the truth behind what's going on. The quest for mankind's salvation begins with you, a rickety old bus and a desk fan. Hey, you have to start somewhere right?

In a nice little ruse, Tranzit starts you off in a boarded up bus station that masks the true scope of the map. Here you can re-familiarise yourself with the process of killing zombies for points, spending your earnings on new guns, and even dabble in the mode's new crafting system.

It's not quite Dead Rising 2 levels of crafting, but you can still make a range of wacky and lethal contraptions. There is no mini-map in this mode and no HUD markers to show you where crafting ingredients are hidden. You just have to find them for yourself.

The first concoction is a weaponised decoy called 'The Turbine', which is essentially a mannequin with a desk fan for a head, strapped on with a payphone cable. Zombies attack it instead of you, and get a face-full of fan for their trouble.

Crafting it is as simple as gathering the components, finding a tool bench and letting the game do the rest. You can't spend too long dithering about testing out new recipes and hunting for scrap, because just like in survival mode the difficulty increases after each round.

This is perhaps one area where classic Survival play and Tranzit segue too much, as it would have been a lot more enjoyable to explore what the world has to offer at your own pace. This constant stress isn't helped much by the mode's fast travel mechanic - a fortified bus. 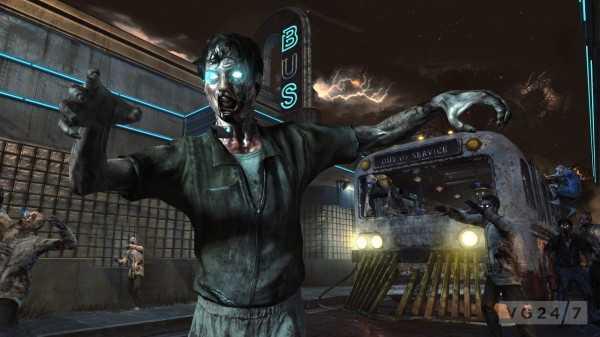 Every so often you'll hear the bus horn honking, which means it's about to leave and drive to the next area. You can either stay where you are and wait for it to roll around its circuit again, or hop on board and journey to the next hub.

If you get on board you will have to fend off zombies for the whole drive as they pile in through the windows and tear down the fortifications. You can hop off at any time, but it's brutal out in the sticks, so staying on board is to be advised.

Each cluster of stops makes up one of Tranzit's many chapters. You can't save whenever you like, but you can complete a cluster of areas to unlock the next one on the world map. Being killed after clearing many waves only to sent right back to the start is a kick in the balls, and it wears thin pretty fast.

“Just like Black Ops 2 multiplayer, Zombies sees many familiar traits return. It’s comforting, and there is enough new content in here to make the mode feel bigger and more ambitious, even if it is still relentlessly challenging.”

Solo play is an option but it's just too difficult on normal settings, enforcing co-op play or a drop down to easy mode at every possible turn. To be fair Tranzit is great fun in four-player, but a scaled down and reasonable experience for solo attempts might have help reduce the sting of failure a little.

There is a wide range of weapons on offer to help even the odds a little, and as Tranzit is set in the 60s you can revisit all of the original Black Ops weaponry, and pick up random power-ups dropped by zombies such as Insta-Kill, Max Ammo and mini nukes that wipe out zombies nearby.

Just like Black Ops 2 multiplayer, Zombies sees many familiar traits return. It's comforting, and there is enough new content in here to make the mode feel bigger and more ambitious, even if it is still relentlessly challenging. Plus it's as funny as all hell, spewing out a payload of killer quips and banter along the way.

If Tranzit all gets a bit too challenging you can return to Survival mode which takes place in arenas dotted along the Tranzit map. It's the same mode from the original Black Ops that sees up to four survivors battling the undead, rebuilding barriers and unlocking more of the map as they go.

New to Survival mode is Grief, which is a competitive slant on Zombies. It throws two teams of four Government enforcers - the CIA and the Center for Disease Control - into a map and tasks them with being the last group standing. There is no friendly or PvP fire however, but competition is still fierce as players scramble for power ups and unlocks.

Things get pretty heated as you reach the later levels, with flaming zombies that explode on impact making crowd control potentially suicidal if you get too swarmed. Players can still revive each other, and when lots of people start going down the round gets pretty tense.

It's a neat PvP slant on Zombies but again it would have been appreciated if players had the option of shooting each other in competitive play while contending with zombies too, as it still feels a tad to similar to standard Survival mode. Regardless it's still frantic and fun.

Black Ops 2: Zombies is as brutal as ever, giving players a real challenge against impossible odds, as well as a wicked sense of humour. Tranzit is a significant expansion of the format and it holds many secrets that will keep you coming back for more, but it's not revolutionary.

Now, a Treyarch-produced game based solely on zombies. That'd be very interesting indeed. Maybe next time though.