Assassin's Creed 3 makes you look badass with minimal effort. VG247's Dave Cook asks if feelings of empowerment should be earned through skill, or doled out free of charge.

As the need to be inclusive rises, many developers will judge the point at which they begin to cut less-skilled players out of the loop. Weekend gamers, family-oriented players and the young still want to game, but they don't have the time, desire or skill to put into mastering a brutal experience.

The latest, long-awaited instalment in Ubisoft's Assassin's Creed franchise launched last week, and while it offers a rich open world full of character and colour, the game still manages to feel restricted and guiding - which is no small feat for such a large sandbox title. It's just the latest example of the notion of accessibility drilling the challenge out of core games in general.

I have to stress that I'm not putting the game down at all. I'm enjoying the experience. However, Ubisoft Montreal has opted for a dumbed-down combat mechanic, as well as a parkour system that's almost too smart for its own good.

Challenge doesn't always mean an ultra-hardcore approach to difficulty - not everyone wants the punishing brutality of Super Meat Boy - but by the end of a game I expect to have at least been tested incrementally along a smart, well-devised and rewarding learning curve. You earn victory: you aren't just handed it.

In truth, though, Assassin's Creed 3's combat system is devoid of challenge. It simply isn't there. It's possible to simple hold one button to enter a counter-attack stance and wait for enemies to hit you. Then some handy slow-mo signifies that you can switch to the attack button to kill your target.

That is not skill, but rather a QTE chain without the on-screen button icons. As a result, it's lacking challenge, immediacy and tension. I realise this is a completely different type of game, but one of my favourite third-person titles ever is Bayonetta. It's Assassin's Creed's diametric opposite in terms of combat.

Every battle in Bayonetta is a tough, potentially fatal challenge. When victory comes, you know you've earned it through raw skill. You look damn good doing it too, but executing the most insane-looking moves on the labyrinthine combo tree requires expert timing, discipline and cat-like reflexes.

The same goes for Dark Souls. Nobody beats Ornstein and Smough simply by holding or tapping one-button.

I understand that if every game were so difficult hardly any of us would have time or the inclination to complete one, but that feeling - any feeling - of reward simply doesn't exist in Assassin's Creed 3's combat mechanic. Although it looks stylish, we're now getting back to the days of QTE over-use - developers are simply finding new ways to mask the prompts. 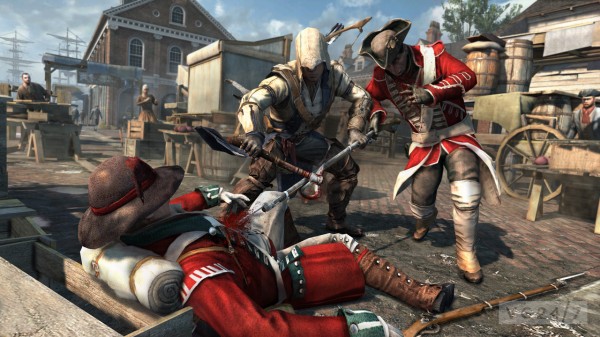 Hold 'B' and occasionally press 'X' to win. Congrats, you're an AC3 master. How does it feel?

Another issue is the game's parkour system. The player holds down the right trigger to climb or leap around rock faces, tree canopies and buildings. Again, this requires minimal skill, but the mechanic feels dated and regularly gets confused when approaching Assassin's Creed 3's open world.

It worked fine in previous games, but chances are you will - at least once - climb up or fall down something you didn't want to, or get yourself caught by pursuers because the mechanic tripped itself up. Simplicity is not always the answer to creating fluid gameplay.

But we appear to now be hurtling down the motorway, slavishly following the signs to "Access". Checkpoints are getting narrower. Killing's getting easier. Racers - most recently, Forza: Horizon - have rewind mechanics in case you crash. Games ask you after multiple deaths if you'd like to lower the difficulty. Some Nintendo games are even completing themselves.

I've interviewed several developers in my time doing this who talk about challenge like its a bad thing, that they're almost afraid to make their product too difficult for fear of it cutting out less-skilled, time-poor or casual players. In real-speak this means, "We want to make more money by including a wider audience": few can deny this is smart business.

But at what point does coddling players become unbearable? It's a vastly subjective topic, but it's no accident that we're seeing difficult games, such as Hotline Miami or Dark Souls, championed almost specifically because they're hard.

As the need to be inclusive rises, many developers will judge the point at which they begin to cut less-skilled players out of the loop. Weekend gamers, family-oriented players and the young still want to game, but they don't have the time, desire or skill to put into mastering a brutal experience.

They still want their adrenaline fix, and while some developers are keen to simply hand it to them, no questions asked, when does this impede on the enjoyment of the rest of us?