Spring is already poised to give way to summer in Animal Crossing: New Horizons this June. For players in the northern hemisphere, a huge variety of fish are making their triumphant return to your island’s waters. And with very few departures, you won’t be able to move for fishing opportunities.

The headliners for June are undoubtedly the sharks: all six species with their distinctive shadows are returning to your shores this month, and since most of them sell for over 10,000 Bells (and look really cool on display) there’s never been a better time to head back down to the ocean. The rivers are teeming with new life too: significantly, you can once again try your hand at catching the trinity of the biggest, scariest, and most valuable river fish: the dorado, arowana, and arapaima.

Let’s not neglect the (relatively) small fry, however: you can also celebrate the return of the ribbon eel (sea); the saddled bichir, tilapia, and piranha (river); and the giant snakehead and the gar (pond) this June.

Departures are very quiet this month, but it is your last chance for a while to head to the river clifftop and catch yourself a cherry salmon or a char.

No Fishing Tourney this month — but the next one is due to take place on July 10. Make a note in your diary and consider making a start on crafting all the fish bait you’ll be needing to net yourself a trophy.

Whichever fish remain on your to-catch list this June, this full guide is here to help — covering where and when to find each and every fish in the game, when they unlock, and including a handy list of the fish prices in Animal Crossing: New Horizons, so you know which to prioritise for selling. There are also month-to-month tables, so you can start to plan ahead for the rest of the year.

Before you can stuff any wriggling fish into your waiting pockets, you’ll need a fishing rod. Unlock the crafting recipe by completing the campfire orientation with Tom Nook at the very start of the game, then speaking to him in Resident Services for a DIY workshop.

Once you’ve learned the recipe you can craft a fishing rod at a DIY bench, or at Tom Nook’s work bench in Resident Services. If you’re out and about on another island, speak to Wilbur and he can put in a requisition order for tools – but will charge you in Nook Miles. Alternatively, if Nook’s Cranny has been upgraded at least once on your island, you can fork over a few of your hard-earned Bells and buy a ready-made fishing rod from the cabinet. 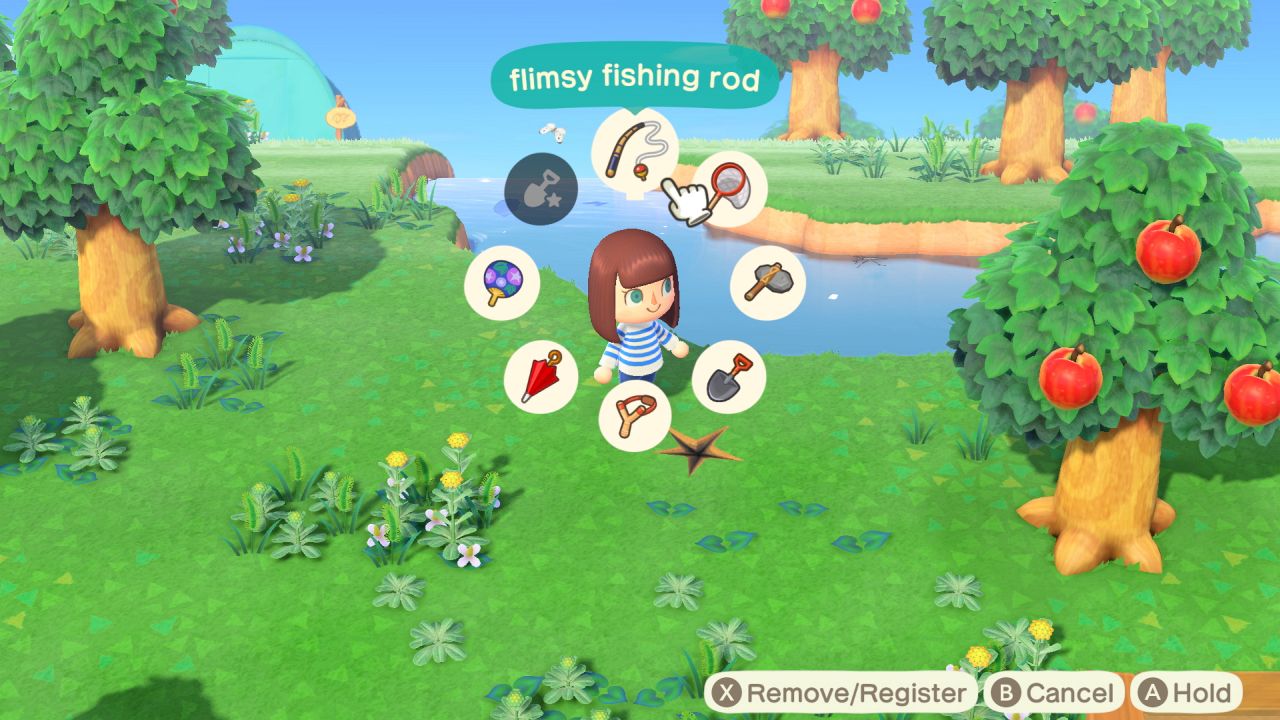 As you acquire more DIY recipes, you’ll gain access to better tools. However, if you want the best of the best, you’ll need to make Golden Tools – which we have a full page on how to make here.

Where to find fish in Animal Crossing: New Horizons

The fish in Animal Crossing: New Horizons appear as shadows in the water in a variety of places. This includes the sea around your island, in rivers, as well as in-land ponds. Ponds are the small self-contained bodies of water which don’t lead anywhere else.

That’s not all you have to contend with though. Some fish can only be found in ponds and rivers on cliff tops you reach with a ladder. The critterpedia specifies a different between clifftop rivers and ponds – however anecdotal evidence suggests you can find clifftop fish in any elevated water.

As for fish that are found at the river mouth, this is where the running water meets the sea at the edge of your island. While some of the priciest fish can only be caught off the wooden piers that jut out onto the ocean.

For this month’s most rare and valuable spawns, head to the pier for a chance to catch the Mahi-Mahi and the Giant Trevally. Both of these elusive critters have arrived on your island for the long haul, sticking around until October. While not the most valuable to sell they’re not cheap either, and are also two of the rarest catches in the game, so you might want to make the most of that time. Be sure to look for them if you still need to add either to your Critterpedia.

While you can know where to find a fish, making it appear is another question entirely. Dig up the spouts of water you see on beaches to collect Manilla Clams. These are used to craft fish bait. Next, scatter the fish bait in the area you know the rare fish can spawn and be persistent. It probably won’t work first time, but with persistence you will eventually see results; and it’s definitely quicker than waiting for rare fish to spawn on their own.

Below is a list of all 80 species of fish you can catch in Animal Crossing: New Horizons, including the time of day they’re active, where on islands they pop up, and the months of the year they reveal themselves. Not all of the fish look the same when they’re underwater though. There are 6 types of shadow size, with a couple of variants.

Eels are uniquely long and thin, whereas you can see the fin of big sharks and ocean sunfish. Otherwise, the sizes go in order of: tiny, small, medium, large, XL, and XXL.

This data comes from the embedded YouTube video by BeardBear, so if you want a visual representation of what all of the fish look like when you catch them, start the following video from 6:43:

Check out their channel, and the rest of the video for a list of all the bugs in Animal Crossing: New Horizons.

If for whatever reason you can’t watch the video, the information is also in a table below. The additional price data comes from the Animal Crossing wiki community under CC-BY-SA license, which means you can also use and remix the data as you wish.

According to the Animal Crossing Official Companion, some fish only unlock after you’ve caught a certain amount of other fish. We’ve updated the table to reflect this.

If you’d prefer a fish price list that’s split up by what you can find in your game right now, then here are the month-by-month breakdowns of the fish in Animal Crossing: New Horizons.

These are all the fish you can catch in the winter month of January.

February is similar to January in terms of the fish population of your island.

We see a couple of changes in the types of fish you can catch in the transitional month of March.

At the start of cherry blossom season, you’ll see some interesting changes in the fish stocks on your island.

As we get closer to summer, more varieties of fish become available in Animal Crossing: New Horizons.

Summer is getting into gear, and with it some new fish appear to collect and sell.

Tons of large and expensive fish start to fill the water in July, so grab a rod.

The high price fish bonanza doesn’t let up in August!

While you can still get a lot of great summer fish, even more varieties pop up in the transitional month of September.

As fall settles in, some of the big ticket fish are replaced with new types.

Now getting towards winter, the fish stocks around your island are starting to shrink, but at least some types you haven’t seen for a while return.

Like the previous month, while there are a few returning fish, there’s not the biggest selection.