There are loads of things to do in Red Dead Redemption 2, including a nifty little side quest to find some Dreamcatchers. Even hardened outlaws need a diversion sometimes, and there’s a unique treasure waiting for dedicated collectors.

There are 20 Dreamcatchers to be found in Red Dead Redemption 2 as part of the Dreamcatchers questline. If you manage to find them all you’ll be rewarded with the Ancient Arrowhead treasure, and we know how much you guys like special loot.

The Dreamcatchers can be found all around the map and the guys at Arekkz Gaming have made this handy video guide to help you out further.

Some of them are quite large and easy to spot whereas some are a little trickier to see. The time of day will also affect their visibility. Most of them seem to be on trees that stand out from the others, either by being much larger or looking pretty dead.

Here are the locations of the first 10 Dreamcatchers to get you started:

You’re halfway there! It might not look like it now, but the locations of each Dreamcatcher form a picture on the map that we’ll get to later. For now, here are the final 10 locations:

Once you’ve interacted with the final Dreamcatcher, Arthur will pull out his notebook to reveal there is one final marker you haven’t discovered yet. You’ll see that the shape resembles a bull or buffalo somewhat.

The final marker is at the Elysian Pool. Set a waypoint for the Northern part of the Pool, and head behind the waterfall. We suggest bringing a lantern with you as the path is dark, but the minimap does guide you pretty well.

This location also makes up part of the Poisonous Trail Treasure Hunt, so you can kill two birds with one stone.

Head through the cave until the path splits and take a right. You’ll see some light streaming in. Climb the rocks in front of you until you see an ancient cave painting on the walls to the right. 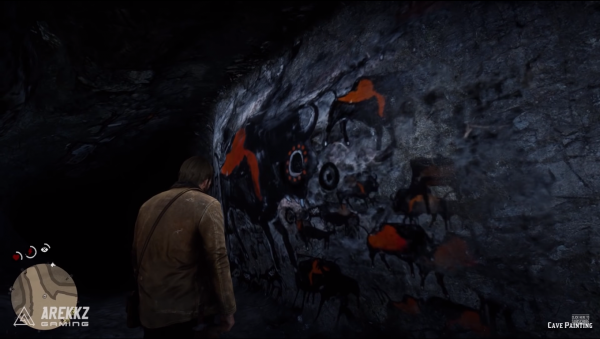 Walk up to the painting and interact with what looks like the eye of a bull to collect your reward, the Ancient Arrowhead treasure. Congratulations! You did it. Now, get back to collecting resources for your camp already.

If you still have the collect-a-thon itch, we’ve got guides on where to find all of the dinosaur bones and cigarette cards.

Red Dead Redemption 2 arrives on PC on November 5 and comes with a slew of new content, which you can check out here.