Despite the introduction of Candy currency and Chocolate Strange Coins in Festival of the Lost, you’re still encouraged to give your gnashers a good brush in Destiny 2.

The Festival of the Lost is well underway and there’s a bunch of new activities to be getting on with, including completing a new Triumph seal.

A Brilliant Smile is a seasonal Triumph where you’ll need to freshen your breath but brushing your teeth. You’ll need to collect various treats from vendors all around the Destiny 2 map, so here’s how to get started.

How to complete A Brilliant Smile Triumph

First of all, you’ll need to complete a Haunted Forest run, then it’s off to visit Eris on the Moon. Keep your Halloween mask on throughout for this to work.

Speak to her and she’ll give you a Tiny Box of Raisins that are intended for someone on the Tangled Shore – that someone being Spider. 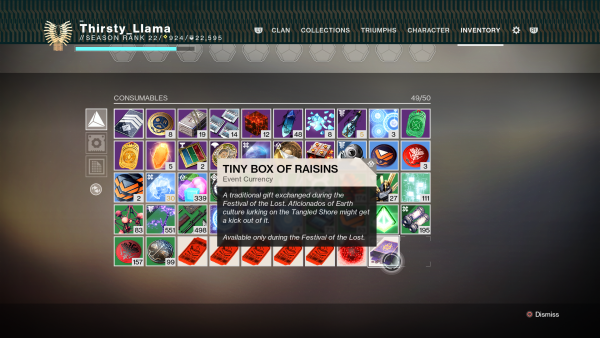 Once you’ve spoken to Spider, you’ll get the quest Even Handed, where you’ll need to kill 12 Fallen, Scorn, Hive and Cabal enemies in the Tangled Shore. You’ll then get the Winged Chew, which you can take to Ana Bray on Mars.

She’ll give you the Armed to the Teeth quest that involves 1- Kinetic, Energy and Power weapon kills on Mars. She’ll give you some Unchocolate, which you can take to Asher Mir on Io.

As part of the Precisely quest, you’ll need to get 10 precision final blows on Xex and Taken on Io before he’ll give you a Piece of Celery – what a dick. You can take this celery to Brother Vance on Mercury, who gives you the In Your Element quest step.

To complete it, get 10 Arc, Solar and Void kills to get Splice Drops. Next, it’s over to Failsafe on Nessus for the Touched by Light quest. You’ll need to kill five Fallen, Vex and Cabal using abilities to get Salted Sweets. 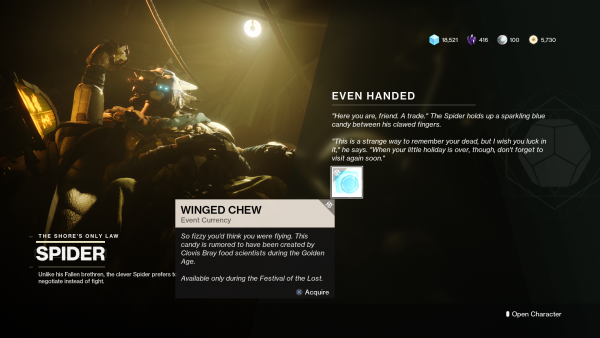 Take these sweets to Devrim Kay in the EDZ and pickup the Foregone Conclusion quest. You’ll need to get five finishers on Fallen, Cabal and taken in the EDZ before you’ll get the Sour Engram.

Take that to Petra Venj in the Dreaming City to get The Best of my Abilities quest step. You’ll need to get five melee and grenade ability kills as well as 10 Super kills. She’ll give you a Sugary Engram for your troubles, which you can take to Sloane on Titan.

She’ll give you the Not in our house quest, where you’ll need to fill the progress bar by getting kills in the Solarium, Festering Halls and Arboretum. She’ll give you Void Fizz once you’re done.

Finally, head back to Eris Morn, who’ll ask you to dance for her. Use your favourite emote and she’ll give you a Goody Bag with a Toothbrush in it. Head to your inventory and check the Consumables tab to find and use it to complete the Triumph.

Afterwards, it becomes a used toothbrush, and it would be a good idea to keep a hold of it. 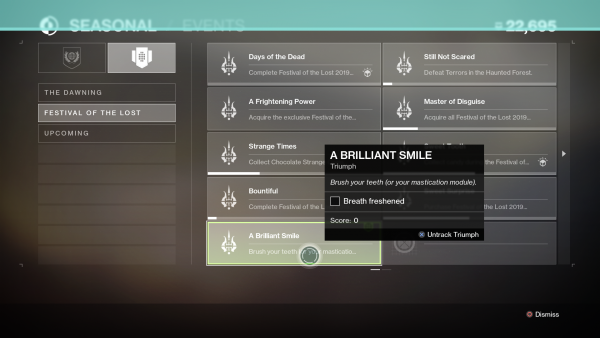 You can check out our guides on how to get the Xenophage Exotic Machine Gun, the Braytech Werewolf Legendary Auto Rifle and where to find the Pit of Heresy Dungeon here.

You can also check out our guides on how to get the Leviathan’s Breath Bow and Deathbringer Rocker Launcher.