The time has come round again for a new Humble Monthly with this August’s featuring Surviving Mars and Kingdom Come: Deliverance as the headline games.

If you sign up to the August Humble Monthly you can get city building sim Surviving Mars and the medieval RPG Kingdom Come: Deliverance for just $12. Even though they’re part of the August bundle, both games will be available to play immediately. 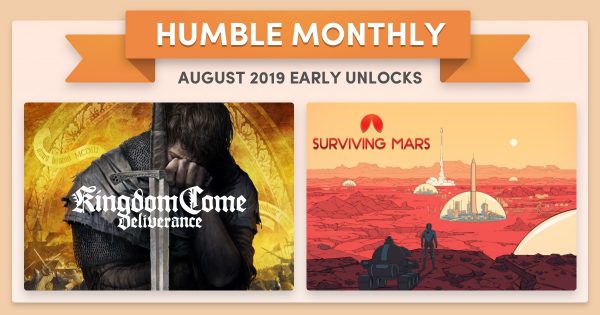 For a little more about each game, Kingdom Come: Deliverance is a massive open-world RPG in which you take on the role of a blacksmith’s son, Henry. Starting off as a fairly standard bloke, you’ll learn and grow as you explore the world in a quest to avenge the murder of your parents and the destruction of your village.

As for Surviving Mars, the name does a pretty good job of clearing up what that’s all about. Nevertheless, it’s a deep and complex city-builder from Haemimont Games and Paradox Interactive. You’ll have to do everything to create a sustainable colony on the red planet, from cultivating food, gathering minerals and generally looking after the well-being of your populace. It’s unclear whether or not Matt Damon makes an appearance growing potatoes with poo.

In terms of value, it’s a great bundle, considering that Kingdom Come: Deliverance is currently $18 in the Steam Summer Sale. That’s quite a considerable saving on that game alone. Not to mention, you’ll also end up with a handful of other games once the bundle fully unlocks on 2nd August.

Humble Monthy is a rolling subscription service, however, you can sign up for the August bundle for $12 for these two games and then immediately cancel. If next month’s bundle rolls around and those new games catch your interest too, all you have to do is sign up again!

We keep track of all the best gaming and tech offers over at Jelly Deals, where you can find everything from cheap PlayStation Plus deals to the best PS4 external hard drives.