Steve Jobs has finally resigned as Apple's CEO, but the departure of the enigmatic visionary will not stop the rise of Apple as a major force in video games. Patrick Garratt reports. 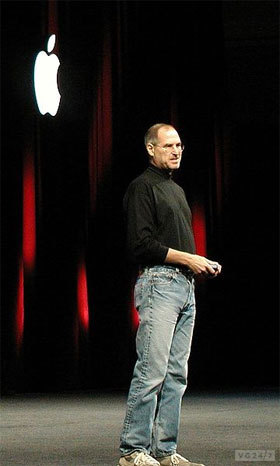 Co-founded Apple in 1976 with Steve Wozniak and Ronald Wayne.

Left in 1985 after an internal power struggle, but returned in 1996 after Apple bought Jobs' NeXT Computer.

Was one of the first people in the computer trade to recognise the importance of the mouse-based UI.

Announced troubles with cancer in 1994.

While investors predictably panicked at news of Steve Jobs’ resignation as Apple’s CEO this morning, it’s an overdue move that clears the way for a well-earned retirement and the destruction of the myth that Jobs is some kind of Atlas, holding aloft the world's most prestigious computing firm on his increasingly frail shoulders.

And let's be clear: Apple is video gaming's next major player, with or without Super Steve.

The transition away from Jobs as Apple’s figurehead was inevitable, and has been expertly managed. His standing aside is a necessity, and comes at a time of perfect corporate strength.

Apple is unbelievably solid. The company has sold more than 25 million iPads since it launched in 2010, with over 9 million moved in the June 30 quarter alone. That's an awful lot of games-playing devices.

iPhone, too, is clearly now an unmovable part of the games landscape, with over 20 million sold last quarter, a three-month period in which Jobs was obviously planning his exit.

While the investor community argues over the significance of Jobs' resignation, the implications for Apple as a gaming firm are minimal. Apple has made clear its intentions on the games space in the past year, with its iPad 2 announcement focusing on graphics at a San Francisco showcase immediately after Nintendo's keynote at GDC, and its next major set of announcements being held during E3 week.

Apple UK has also become far more active on the games side, with the recent hires of Rob Saunders from Nintendo and Nick Grange from Activision, both PR veterans of gaming hardware launches - Grange was a British PR exec for the original Xbox release.

“The most popular portable game player in the world”

It's not hard to see why. Cumulative iPhone, iPad and iPod touch sales now stand at 222 million units. In the past quarter, Apple sold virtually every iPad 2 it could make. Over 33 million iOS devices were sold in the three months ending June 30. Apple now openly claims iPod Touch is the "most popular portable game player in the world".

And iOS isn't the only popular Apple games platform any more: Valve has thrown itself on the Mac-wagon, with its Mac Steam release coming in April this year.

Steve Jobs' resignation will not stop the rise of Apple as a major gaming company. Jobs confirmed his battle with pancreatic cancer in 2004. He received a liver transplant in 2009, at which time Apple endured heavy speculation that Jobs could die: COO Tim Cook, a strict "doer" type, replaced him as the day-to-day operator for the firm over the surgery period, and will now succeed Jobs as CEO. Jobs is to become chairman of the board, and will still be in a hands-on role involving product development, according to the WSJ's Walt Mossberg.

Jobs and Cook have been working together with Cook as acting CEO over Jobs' illness for the last two years: recent successes have fully involved Cook.

And Apple's apparently unstoppable push into the gaming sector comes in stark contrast to the fortunes of the more traditional figures in the handheld sector. Nintendo, especially, is obviously struggling to remain relevant in the iPhone era. 3DS launched earlier this year to low sales that fell to crisis level in the machine's second quarter, a set of terrible figures that prompted a serious price cut to both the console's RRP and Satoru Iwata's salary.

At GDC earlier this year, Iwata showed an offline portable console with expensive games on catridges, while the world was downloading dollar-apps for iPhone - the president even spoke directly about the erosion of premium handheld software by “big app stores” and how it could damage the games development topography irrecoverably.

Sony has also been hit by the alterations in the handheld games market brought on by iPhone, and, of course, Android, but has managed the transition better than Nintendo. Vita clearly has a better understanding of what a mobile device needs to be in the iPhone world, with social connectivity being placed at the device's core at gamescom last week. It has twin thumbsticks and an over-powered chipset to allow it to provide an experience unique to the iOS devices, and a 3G option. How could a modern mobile device not have a constant connection?

While Sony and Nintendo try to find their places in the modern handheld landscape, though, the fact we're discussing their trouble in any respect says it all: Apple has changed mobile gaming forever, continues to sell millions upon millions of handheld gaming devices and is clearly set on focusing increasingly on games going forward.

Steve Jobs' resignation will not alter that. The Apple will grow. And Steve Jobs, finally, will be able to step back from the demands of coal-face management of one of the world’s most successful companies, and see to his health. Given such a sparkling career, it's about time.