If you thought Valve turning game submissions over to fans was a big deal, buckle up.

Thanks to a partnership with Shapeways, Valve has created a program which lets fans create, distribute, and even sell 3D printed replicas of its licensed products.

The arrangement is possible thanks to a licensing agreement between Valve and Shapeways. According to the fine print, anyone can develop Valve-owned products, print them off, and collect revenue from sales. This covers merchandise for Valve games, as well as accessories for Steam Controllers or the Steam Link. Shapeways will deduct a 10% royalty on game products, while game hardware products won't take any cut from revenue.

Shapeways has already begun producing tutorials for turning your fan art into 3D models, and provided some examples for inspiration - specifically, a Dota 2 miniature and a Portal Companion Cube necklace. The best designs will be featured on a Shapeways/Valve hub and promoted on social media and Shapeways magazine. 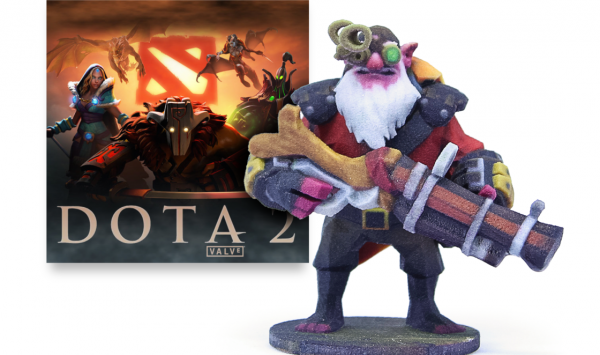 Valve may not have released its own game since 2013, but there's still a huge volume of content in its back catalogue. Given how massive the Valve fan art community already is, you can certain expect many creators will be eyeing this license agreement to create art for a profit.

Still, at this point I'm pretty sure Valve will eventually turn Half-Life 3's development over to the fans.